Early on the morning of Saturday, April 26, the Spira Racing Team gathered to clean the cars and take pictures for this year’s hero cards before splitting up and heading in two different directions for their first outings of the season. Samantha Shaw and Billy Schwartzenburg headed north to Sunset Speedway for practice day in preparation of next week’s home opener, while Scott Simmons and Jake Watson headed south to Flamboro Speedway for that track’s first race night of the season.

Scott and Jake received two practice sessions at Flamboro Speedway. Scott ‘s #44 picked up some speed with just a few air pressure adjustments and Jake had carburetor issues in the first session. Those were fixed for the second session, making Jake happy with the car’s handling.

In the heat races at Flamboro Speedway, Jake started 10th and moved up to finish 6th, while Scott started 9th and finished 4th. As the cars lined up to take the green flag for the 25 lap feature event, Ken, Mark and Samantha arrived to give their support. Just as they did, a wreck on the track allowed the three late comers the time to join Wade, Steve, Jim and Kim in the back grandstands for a complete restart after the damaged cars were removed from the track. 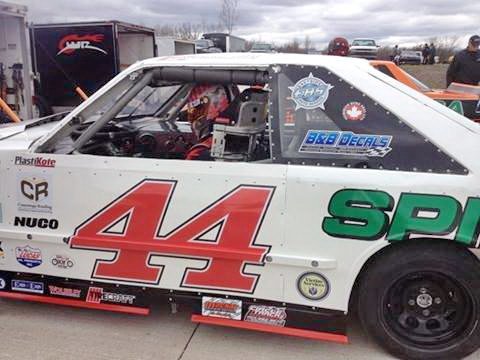 Scott (above) lined up his #44 Klotz Auto Repair Mustang to start 9th and Jake was not far behind in 11th, in his #88 Hype Energy Drink machine. In all, 17 remained to take the green flag for the re-start. The feature went caution free for 25 laps, however, Jake had an electrical issue that shut down his motor on lap ten. The disappointed 12 year old driver from New Hamburg pulled into the infield to watch the balance of the race.

Scott moved through traffic to get into 4th as the race progressed. All the while, the top three who started up front were pulling well ahead of the field and got too far away for Scott to make up any ground during the caution free event, despite running similar lap times to the leader.

At Sunset Speedway, Samantha (below) and Billy both had successful practice sessions and were running very similar lap times as two of the faster cars at the track. Crew member Steve Laking (above) was also in attendance with his #44 Late Model, but he suffered mechanical problems with the rear end and his day was finished early. Steve did take Billy’s #86 out for one session and provided his opinion on the handling of the car and what he thought would make it go faster through the ends.

Overall, it was a relatively successful first weekend at the track and all four cars are back in the shop for some minor work prior to next weekend’s continuation of a pretty aggressive schedule for the Spira Racing Team.

Next up for the Spira Team will see Samantha in the #81, Billy (above) in the #86 and Jake in the #88 all head to Sunset Speedway on Saturday May 3rd for their season opener and a 35 lap invitational event. Pit gates open at noon and racing is scheduled to begin at 5:00pm. Scott will be the lone Spira car attending Flamboro Speedway in the #44, where the pit gates open at 4:00pm, the main gates at 5:00pm and racing begins at 6:00 p.m.