OHSWEKEN, Ont. (July 1, 2022) – The long-awaited 16th Running of the Canadian Sprint Car Nationals did not disappoint on Friday night at Ohsweken Speedway. Drivers from Ontario, Quebec, Alberta, New York, and Pennsylvania all came together for this special event, which was almost two years in the making. Ryan Turner took the $10,000 prize in the Pinty’s Knights of Thunder 360 Sprint Car Series debut at Ohsweken, while Jacob Dykstra won the Action Sprint Tour fueled by Pinty’s A-Main, and Gary Lindberg got the DIRTcar 358 Modified win.

Pinty’s Knights of Thunder 360 Sprint Car Series
Ryan Turner and Matt Farnham earned front row starting spots in the Pole Dash for the first Knights of Thunder A-Main at Ohsweken. 30 drivers qualified for the 35 lap A-Main, all of them racing to be crowned the Canadian Sprint Car Nationals champion and claim the $10,000 prize. Ryan Turner took an early lead until a caution came out when his father Jamie Turner clipped the wall and ended his race. Ryan’s brother Cory Turner, Todd Hoddick, and Ryan Coniam made major gains from their starting positions, however it was Ryan Turner who pulled away from the pack. The race ended on a green-white-checkered finish after Liam Martin brought out the caution with two laps to go. Ryan Turner once again drove away from the field to secure his first Canadian Sprint Car Nationals win. Paulie Colagiovanni took second, followed by Dylan Westbrook in third, Matt Farnham fourth, and Nick Sheridan fifth.

Notes
-Mack DeMan’s quick time in Qualifications earned him both the Qwick Wick Fastest Qualifier Award and the Fastest Canadian Qualifier Award.
-Cory Turner won the new Larry Gartly Memorial Last Chance Hard Charger Award presented by Doddey Creek Agri Services for advancing from the B-Main and gaining the most combined positions between the B-Main and A-Main. Turner won the B-Main from eighth on the grid and then drove from 25th to finish eighth in the A-Main. Turner also won the Nitro 54 Variety Hard Charger Award for his A-Main gain.
-Jared Zimbardi continued his streak of competing at the Canadian Sprint Car Nationals, and is now the only driver to compete in all 16 editions of the event.
-All A-Main starters received a $100 Travel Bonus from DBD Systems (www.dbdsystems.com) in Memory of super fan Brian Dempsey.

Action Sprint Tour fueled by Pinty’s
The Action Sprint Tour Series returned back to Ohsweken Speedway for the first time, and it was Jacob Dykstra who brought the 24 car field to the green flag with Ryan Fraser starting second. Lucas Smith performed a slide job to gain two positions on the first lap to steal the lead. Smith’s lead was short-lived as Seth Roy spun and brought the caution out; Dykstra took the restart as his opportunity to regain the lead and ultimately win the race. 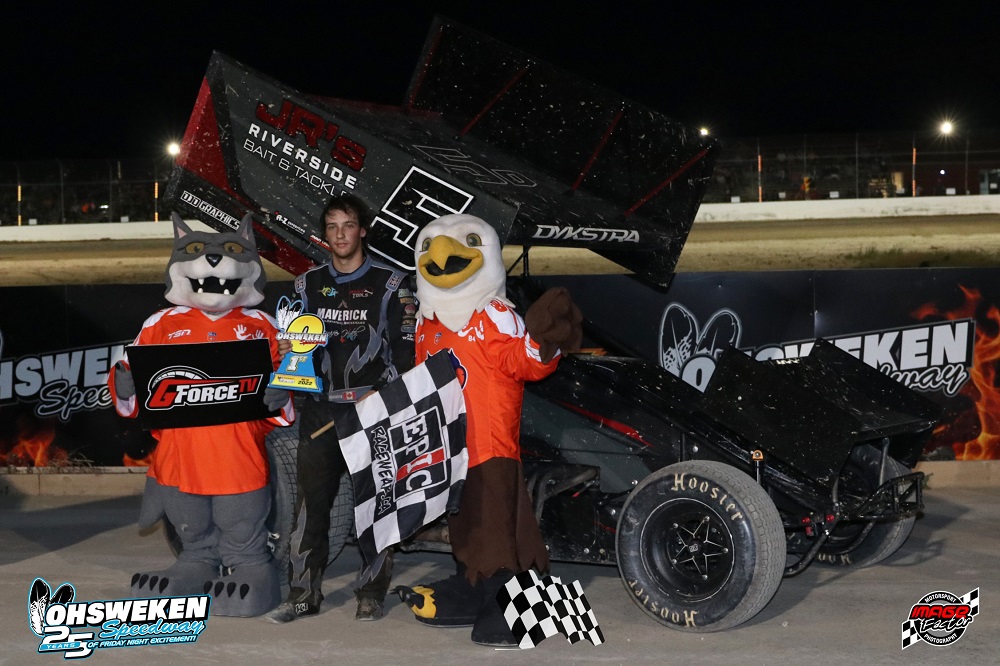 DIRTcar 358 Modifieds
Brad Rouse and Todd Gordon led the field to the green flag for the 20 lap 358 Modified A-Main; the small blocks roared to life down the Ohsweken Speedway frontstretch in the final race of the night, and Gordon passed Rouse to become the race leader. Chad Chevalier began to cut through the pack, passing five cars and taking the lead from Gordon. After losing the lead Gordon quickly began to fade into the back of the pack. Things went from bad to worse for Gordon when out of nowhere his front right wheel broke off and sent him flipping into the wall along the front stretch. The red flag came out immediately as the safety crew rushed to Gordon’s aid, and the crowd cheered and applauded as Gordon pulled himself out of the wreckage. He appeared physically okay but shaken up as he gave his trackside interview. The race restarted with six laps left, and Gary Lindberg moved forward to take the win. 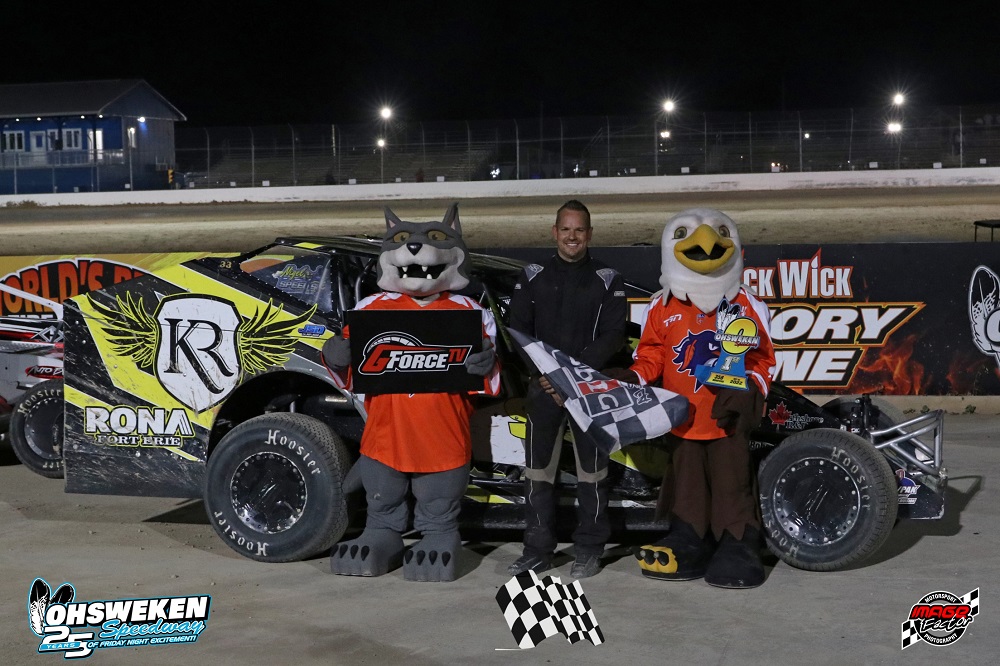 Tyler Willard was able to make a late pass for second place, while Chevalier settled for third. Danny O’Brien finished fourth and Brad Rouse rounded out the top five.

By Brent Otchere with files from Tommy Goudge