Mikey Kruchka and Jordan Poirier earned front row starting spots for the 35 lap CSCN A-Main, both looking for their first Canadian Sprint Car Nationals win. Poirier took command early, looking to follow in his uncle Steve’s footsteps. Paulie Colagiovanni took the second spot from Kruchka on lap two and went after Poirier. The leaders were already beginning to close in on traffic on lap five, but got a reprieve when Nick Sheridan brought out the yellow flag with a broken rear end.

The double-file restart gave Colagiovanni a shot at the lead, but Poirier took command again while Ryan Turner moved into third past Kruchka. Colagiovanni was close behind Poirier and looking to pounce, but the race was slowed again on lap eight when Lynton Jeffrey and Chuck Hebing made contact on the frontstretch; Jeffrey’s car suffered significant front end damage and put the Australian driver out of the race. D.J. Christie also stopped on the track with left front suspension damage which eventually ended his race.

Poirier, Colagiovanni, and Turner restarted in the top three, while Liam Martin, Kruchka, and Kyle Phillips made up the other half of the top six. Martin powered around the outside on the restart, but got pinched between Colagiovanni and the backstretch wall; the contact was enough to break Martin’s rear end and bring out another yellow flag.

Poirier held serve on the next restart with Colagiovanni close behind, while Phillips and Turner diced for third. Row 12 starter Jason Barney moved into the top five, while Friday night winner Jordan Thomas also moved past Kruchka. The next yellow flag came out with 11 laps complete when Todd Hoddick stopped on the track with a mechanical issue.

Colagiovanni took the lead away from Poirier on the restart, while Poirier fell into the clutches of Ryan Turner. A slide job on lap 18 briefly got Turner past Poirier and in a position to challenge Colagiovanni just as they started to encounter traffic. Poirier’s counter was cut short when Barney caught the frontstretch wall and flipped violently. Barney was shaken up, but able to walk away from his badly-damaged car. Going back to the last completed lap put Poirier back into second, and he subsequently inherited the lead when a fuel leak during the stoppage forced Colagiovanni to the pit area and ended his bid for a second CSCN victory.

The race restarted just short of the halfway mark with Poirier leading, followed by Ryan Turner, Phillips, Kruchka, and Thomas. Poirier held the lead again, while Kruchka drove around the outside of Phillips to take third. Turner went after Poirier and took the lead as the two were lapping Dale Gosselin in turn two with 11 laps remaining, and Kruchka then took second from Poirier on the next lap. Another yellow flag appeared on lap 30 when Ryan Coniam spun in turn four.

The single-file restart with five laps left saw Turner, Kruchka, Poirier, Phillips, and Hebing in the top five. Turner doggedly stuck to the low side of the track while Kruchka searched for a way past on the outside. Kruchka made a bold move on lap 34 diving low between Turner and the inside wall in turn one, but Kruchka slid high and Turner drove back around him. Poirier got a shot at Kruchka while Turner drove under the white flag, but Phillips stopped high in turn four to bring out the yellow flag and force a one lap dash to the finish.

Turner had a good restart and drove to the win with Kruchka settling for the runner-up spot. Hebing slipped past Poirier on the last lap to claim the final podium spot, while Mitch Brown rounded out the top five. Josh Hansen, Cory Turner, Jordan Thomas, Glenn Styres, and Baily Heard rounded out the top ten.

The unique circumstances of 2022 allowed Turner to claim two Canadian Sprint Car Nationals wins in one season, a feat that is unlikely to ever be possible again. He also did it with two different cars and two different teams following his move to the No. 15 in August.

“I think we’ve just been gaining speed and winning this race shows just how much we’ve really been gaining,” Turner exclaimed. “Our crew killed it all night; they were thrashing right before we went out, changing tires, changing rims. They worked their butts off.”

Kruchka wasn’t unhappy with second and the $5,000 payday, but wished the race had stayed green. Still, it was a good finish for the veteran driver who has had his share of CSCN heartbreak in the past.

“It’s frustrating because we only get typically one shot at this a year, and then to come so close…” lamented Kruchka. “I’m sure I had a better car running around the top; I just I knew it was going to be a long race and I packed it full of fuel but I was scared to pack it too much because sometimes you get a stumble at the start. I didn’t need that last caution…with the momentum I think we would have been alright, but (on the restart) I got a couple bumbles and I was just praying to hang on to second.”

“We survived…a couple of the guys had trouble up front,” Hebing observed. “We were better on cold tires than we were on hot tires; you know we haven’t been up here in so long and we will make some changes for next time, but it was good to be back.”

Jacob Dykstra took the lead and was looking to regain some of the advantage he lost in the AST points standings following his disqualification on Friday night. The only major incident of the race occurred when John Cadman clipped the frontstretch wall and flipped hard. The veteran of pavement racing emerged uninjured and vowed to return for more fun on the dirt.

AST championship contender Mathieu Bardier brought out a yellow flag just past the halfway mark, briefly heading to the pit area before salvaging a 16th place finish. Bowman had fallen back early in the race but charged forward after the yellow flag, using traffic to catch and pass Smith, Steve Murdock, and Dykstra to take the win and sweep the weekend. Dykstra settled for the runner-up spot, followed by Murdock, Smith, and Darren Dryden, another AST championship hopeful. 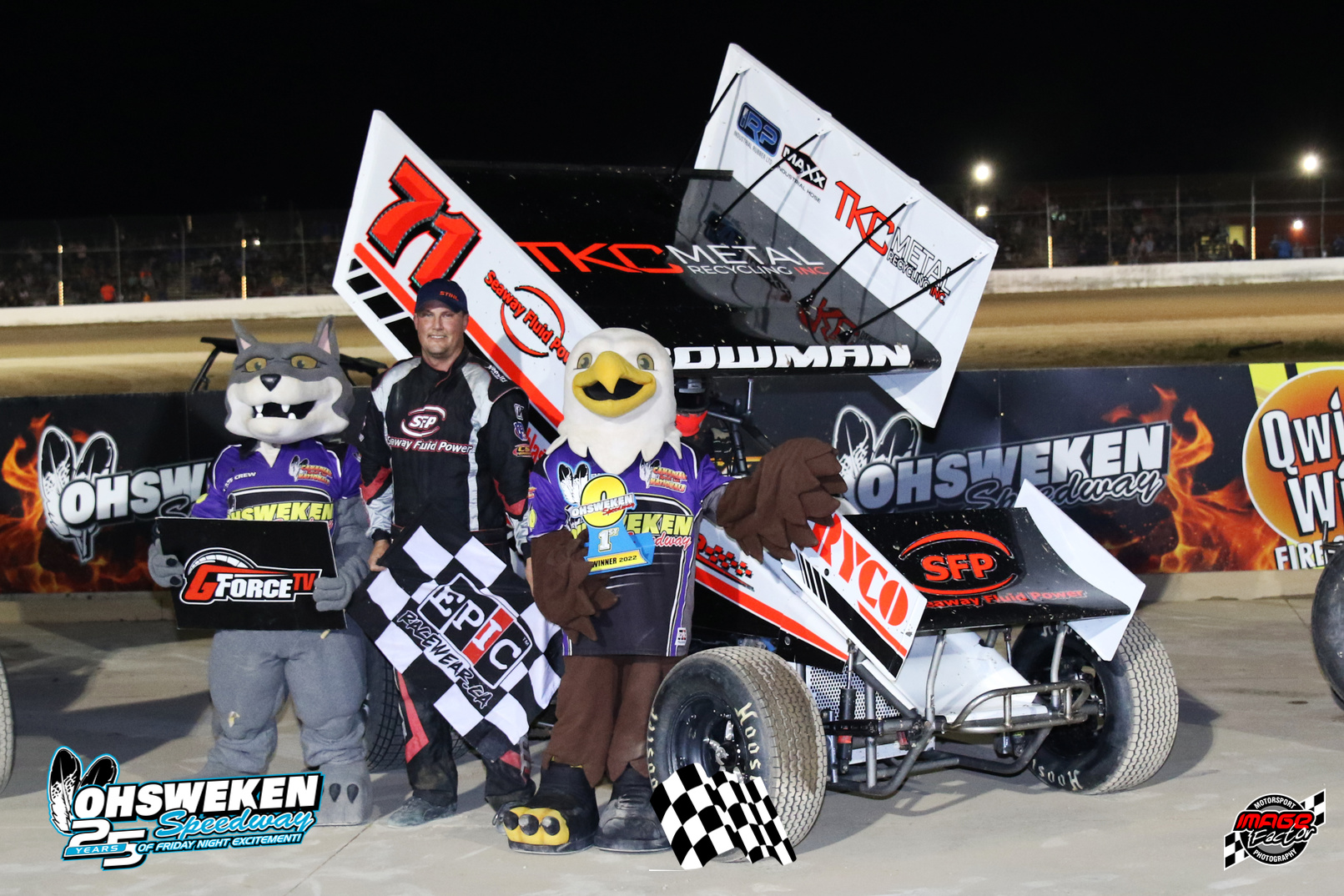