RoC vs. DIRTcar Sportsman Modifieds
Bill Bleich and Noah Mamo made up the front row to start the 30 lap Race of Champions vs. DIRTcar Sportsman Modified A-Main. A five car pileup caused a red flag to come out as the safety crew rushed to the scene. No one was harmed and the racing resumed after a lengthy stoppage. A three-way battle for the second position began to heat up between Adam Leslie, Cody McPherson, and Jay Mallory.

Leslie took advantage of a second restart and took the lead, however Nelson Mason applied pressure, following closely behind in second. Unfortunately another red flag came out as Greg Panunte flipped after colliding with the inside wall of turn one. Panunte was shaken up, but pulled himself out of the wreck as the fans applauded.

After the third restart of the race, Leslie continued to lead until Mason overtook him for the win with two laps to go. Mason proved his versality to everyone, as the former driver of European formula cars is getting it done in a totally different racing discipline. Rounding out the top five were Leslie second, James Friesen third, Bleich fourth, and Brad Rouse in fifth.

DIRTcar 358 Modifieds
The front row of the grid featured Todd Gordon and Scott Wood to start the 35 lap 358 Modified A-Main. Gary Lindberg took the lead on the eleventh lap after stalking Wood. Mike Bowman began to work himself closer to the top three as Brad Rouse and Wood began to lose touch with the leader while they battled for the second position.

After biding his time, Bowman took the second position with five laps left to go. Lindberg on the other hand had a commanding win over the field, leaving only four drivers left on the lead lap and a nine second gap to second place. 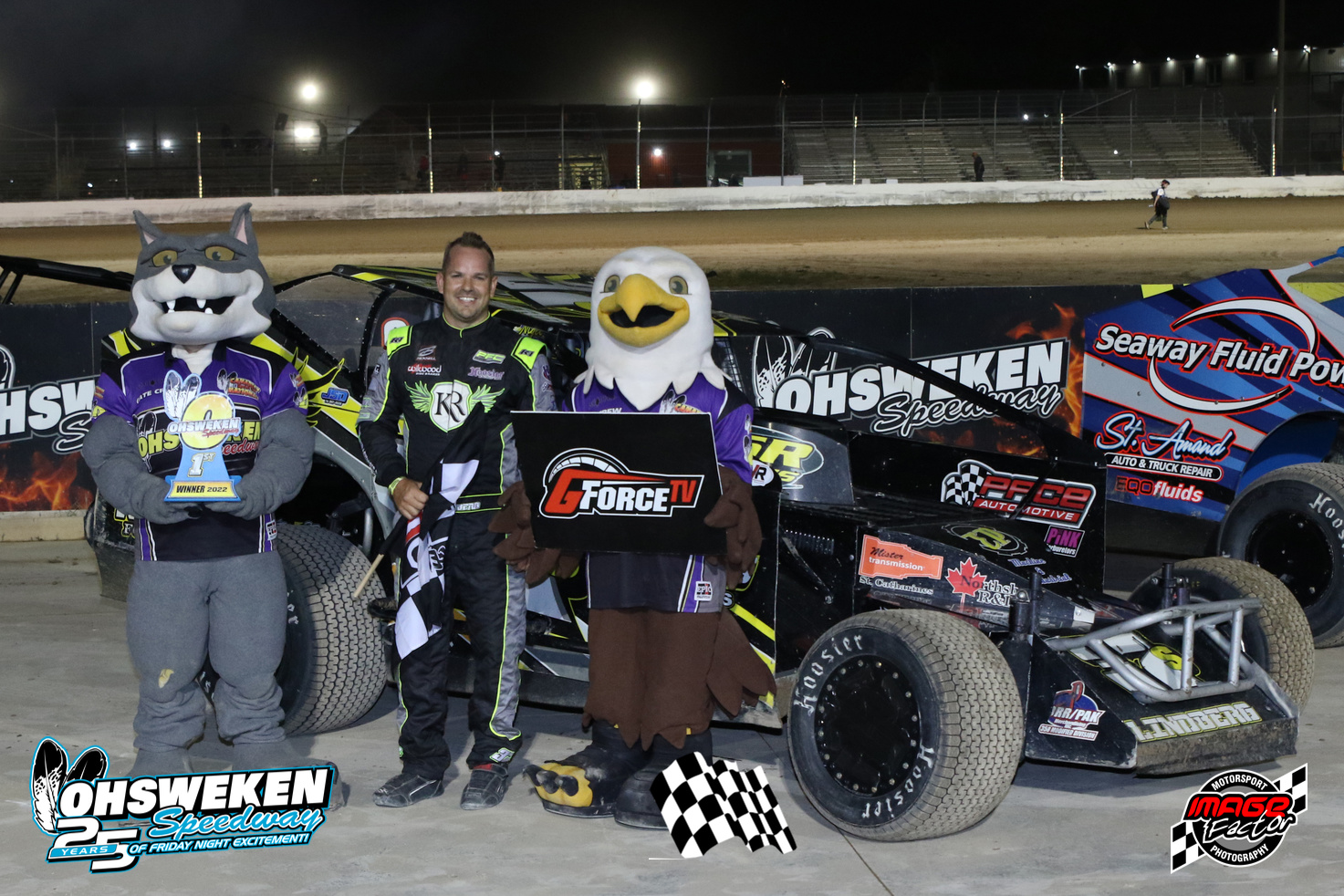 Middleport Mechanical Thunder Stocks
Frank Turkey and Kacey Huffman led the grid to start the 25 lap Thunder Stock A-Main. Tim Phalen took an early lead after starting in the third row. The other driver moving through the field was points leader Dave Bailey, who had advanced to the eighth position. Bailey’s main title rival Ryan Beagle was able to capitalize on two late race restarts and assume the lead. The laps were ticking down as Beagle had a two second lead over Phalen and Kyle Wert, who were battling for the second position.

Bailey drove a conservative race, sitting comfortably in the top ten. Beagle crossed the finish line first to claim wins in consecutive weeks at Ohsweken for the first time in his career. 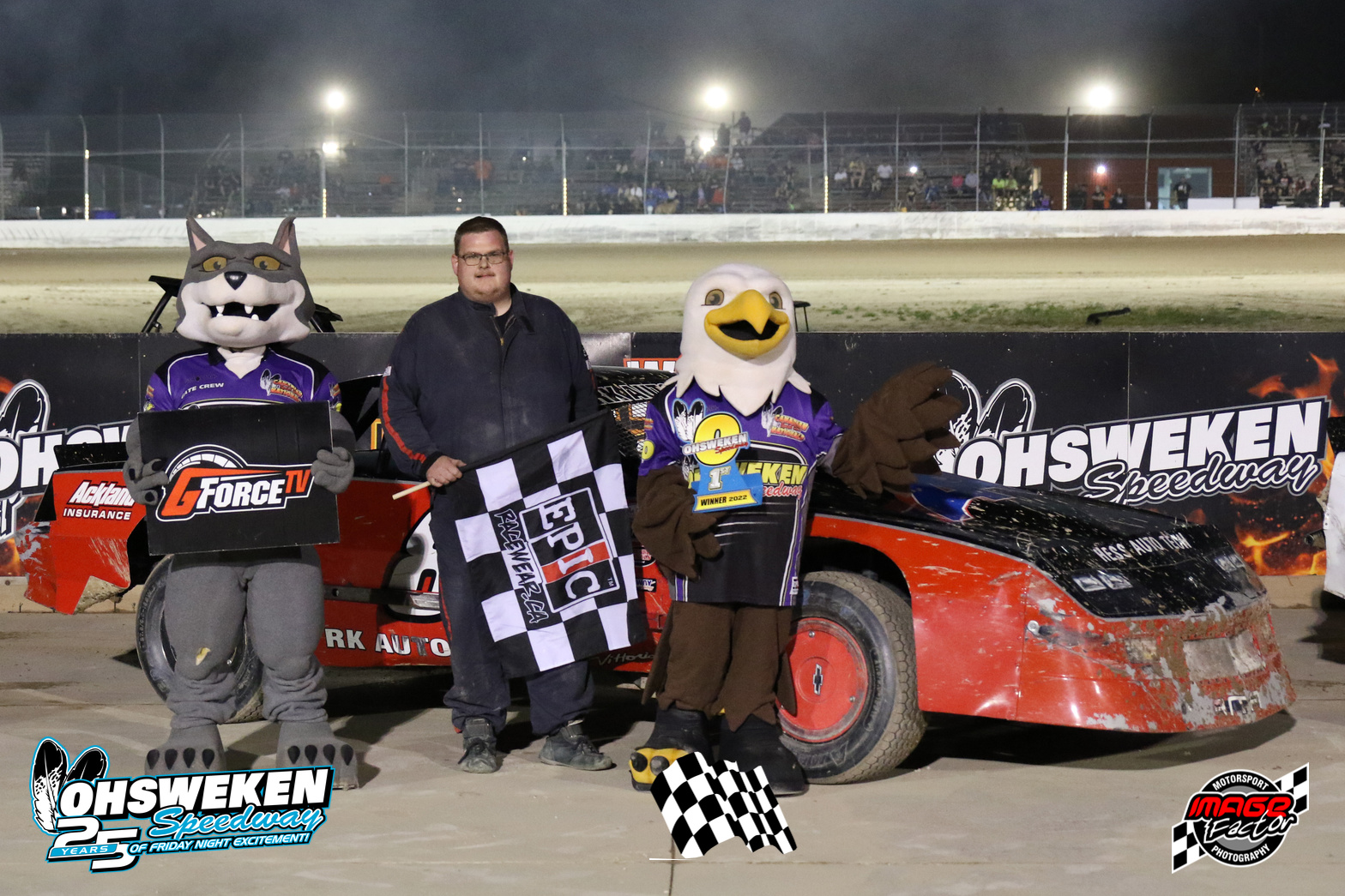 Phalen edged out Wert for second, with Wert taking the final podium spot. Rounding out the top five was Trevor DeBoer in fourth and Christopher Hale in fifth. Bailey clinched his sixth Thunder Stock track championship in a row at Ohsweken Speedway with a sixth place A-Main finish.

HRW Automotive Mini Stocks
Steve Miller and Aaron Dickie led the 28 car field to green to start the 20 lap Mini Stock A-Main. A red flag came out early in the race for a crash involving multiple cars, however all the drivers that were involved were unharmed. Jeremy May had moved himself into the lead just before the red flag and restarted the race in the lead. May’s lead was short-lived as row 13 starter Rodney Rutherford had a better restart and took over. 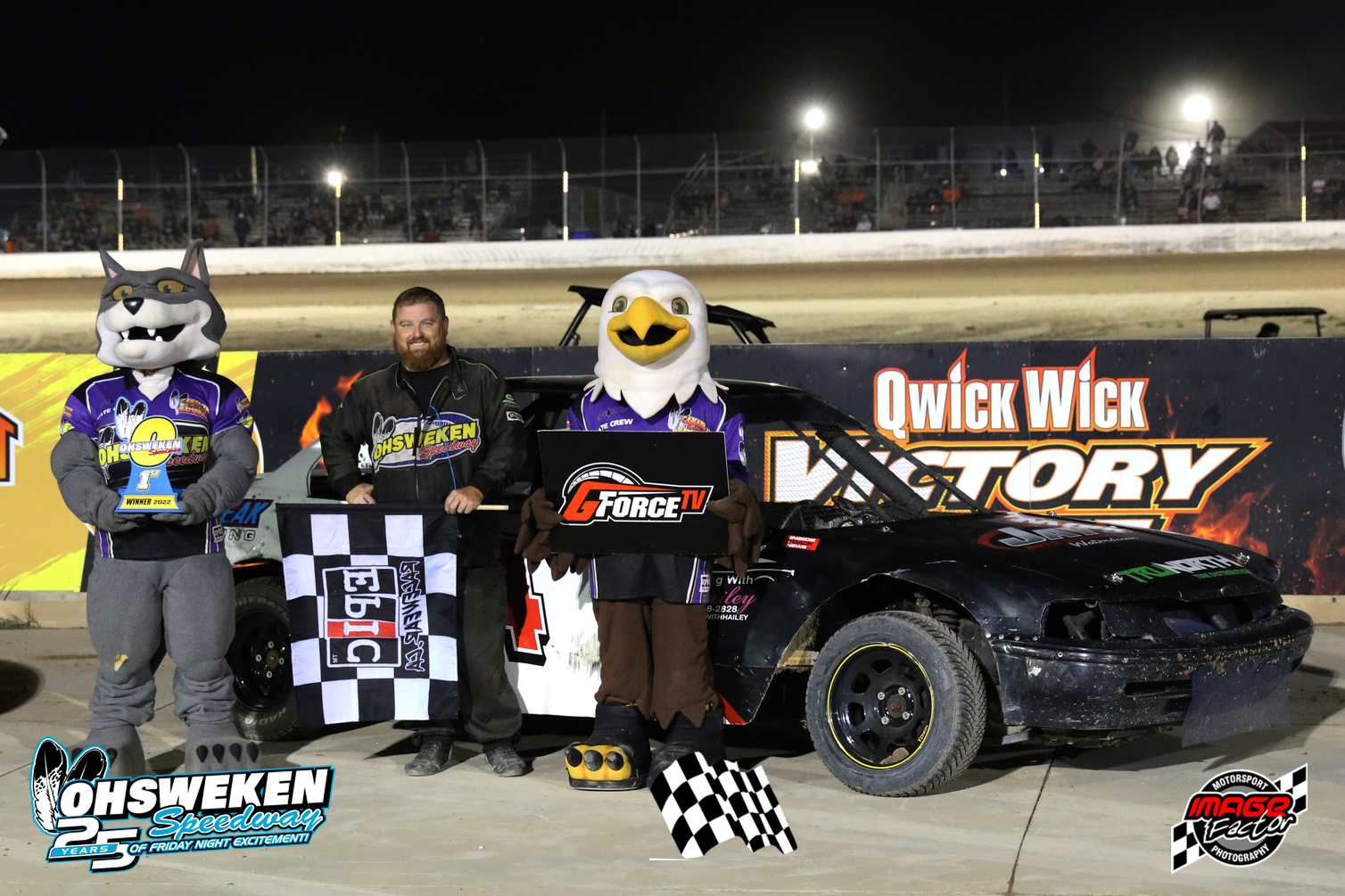 Another red flag appeared with seven laps to go for another multi-car accident, and once again no one harmed but a lot of tension arose between the drivers involved. The dust finally settled after a very exciting race; crossing the line in first was Rutherford for his second Ohsweken win of the season. Rounding out the top five were May, Dusty DeBoer, Nick Erskine, and Tyler Lafantaisie. Lafantaisie clinched his second Mini Stock Track Championship at Ohsweken Speedway and first since 2014.