Kool Kidz-Corr/Pak 360 Sprint Cars
Glenn Styres – who raced earlier in the day in the NASCAR Pinty’s series race at Toronto – drew the pole position, while Liam Martin started second in the 20 lap 360 Sprint Car A-Main. Josh Hansen quickly got around the leaders after starting third while Nick Sheridan worked himself to second and applied pressure to Hansen as they both tried to earn their first career win. A caution flag came out with four laps left to go, setting up an exciting finish with Hansen and Sheridan throwing slide jobs on each other. Hansen didn’t fully clear Sheridan on one of the attempts and clipped him, sending Sheridan spinning off turn four and ending any momentum for the victory. Hansen claimed his first career 360 Sprint Car victory and became the sixth different driver in six races to win this season. Martin finished second, Mitch Brown third, Jacob Dykstra fourth, and Mikey Kruchka fifth. Even though Ryan Turner didn’t finish in the top five he will still remains the division leader, 18 points ahead of his brother Cory Turner.

Strickland’s Crate Sprint Cars
Adrian Stahle and Steven Beckett led the 28 drivers to start their 20 lap Crate Sprint A-Main event. Modified star Mike Bowman gained the early lead, showing that he is becoming very comfortable with his new discipline of racing. Last week’s winner Lucas Smith began to chip away at Bowman’s lead; Bowman courageously defended his lead while navigating through traffic but it was not enough for the Crate Sprint rookie as Smith got around him with nine laps left to go. The final caution of the night came out with eight laps to go, bringing everyone back for a sprint to the finish. Smith’s great restart ultimately saw him winning the race by well over a half straightaway. 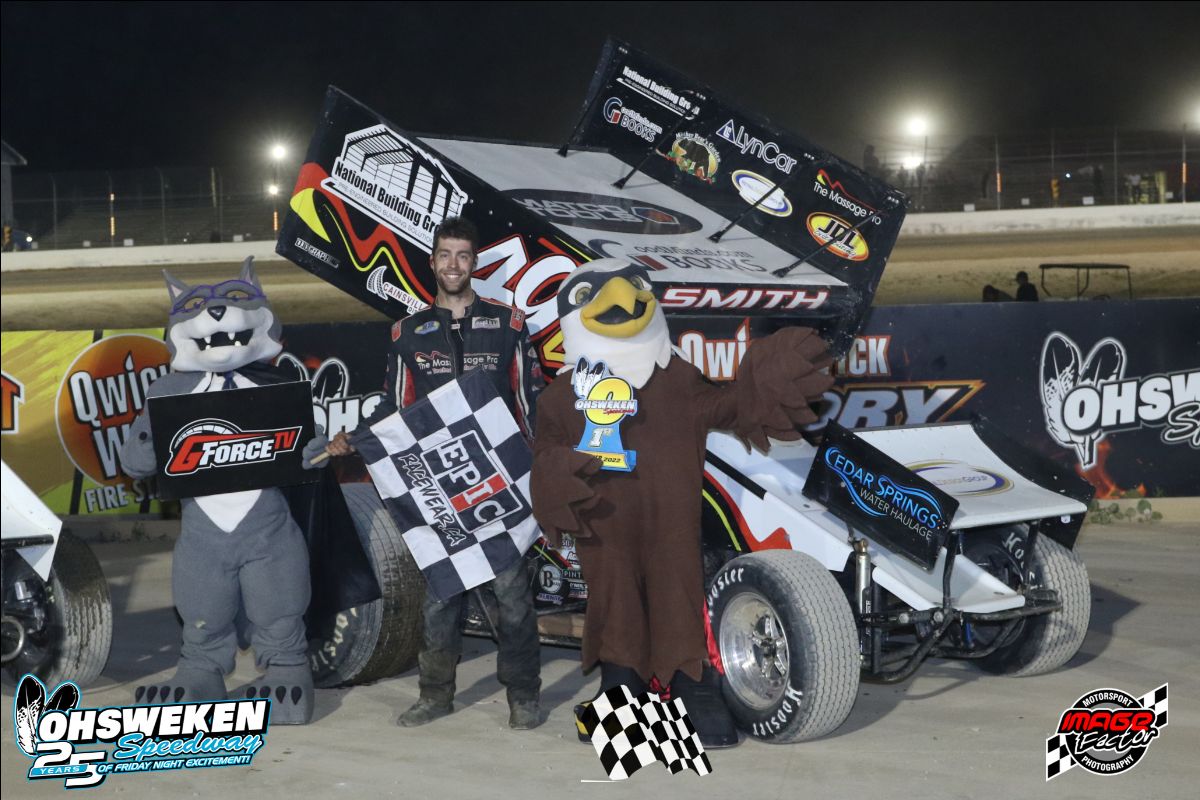 Bowman settled for second, while Eric Gledhill finished third on the podium. Rounding out the top five were Jesse Costa and Brett Stratford finishing fourth and fifth. Smith’s second straight win helped him remain the division leader, now 15 points ahead of Gledhill.

Middleport Mechanical Thunder Stocks
Gofast Teeple and Kyle Andress led the 27 driver field to the green flag to start the 20 lap Thunder Stock A-Main. Mark Fawcett immediately became the driver to beat as he quickly gained the lead within the first lap from row four. Polesitter Teeple suffered a punctured tire after contact with Ryan Berry, ending his race. Two quick cautions had the field reset and allowed Dave Bailey to capitalize on the restarts and enter into the top five. Bailey however pushed a bit too hard and clipped the wall, neutralizing his surge for the lead. Amazingly it was Ryan Beagle who began to challenge for the lead while sporting major body damage. 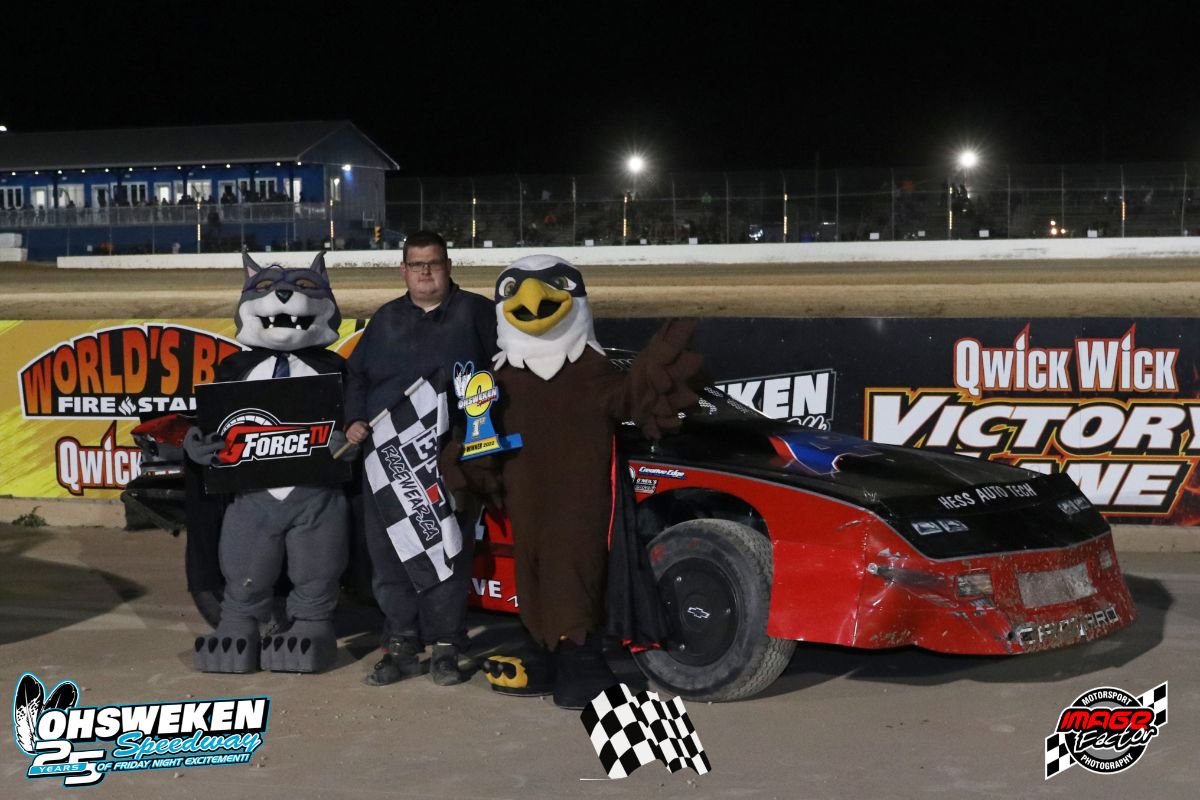 It became apparent that the damage wasn’t slowing him down as he gained the lead and cruised to his first win of the season. Fawcett came agonizingly close to his first Ohsweken victory but had to settle for second, while Bailey finished third and kept his top five streak going from the start of the season. Christopher Hale and Ron Loggie rounded out the top five. Bailey remains the division points leader, ahead by 34 points over Hale.

HRW Automotive Mini Stocks
The front row of the grid featured Tim Nuell and Mike Giberson to start the 15 lap Mini Stock A-Main. The saying “rubbing is racing” was in full effect during the first three laps as drivers battled for positions. Just like last week, Wade Thorne took an early lead until a caution came out due to mechanical problems for Jason Tolton. It looked like Thorne had no one to challenge him for the rest of the race, however Tyler Lafantaisie caught up and took over the lead as he has done so many times already this season. Lafantaisie drove to his fifth victory of the season and sixth straight top five finish. 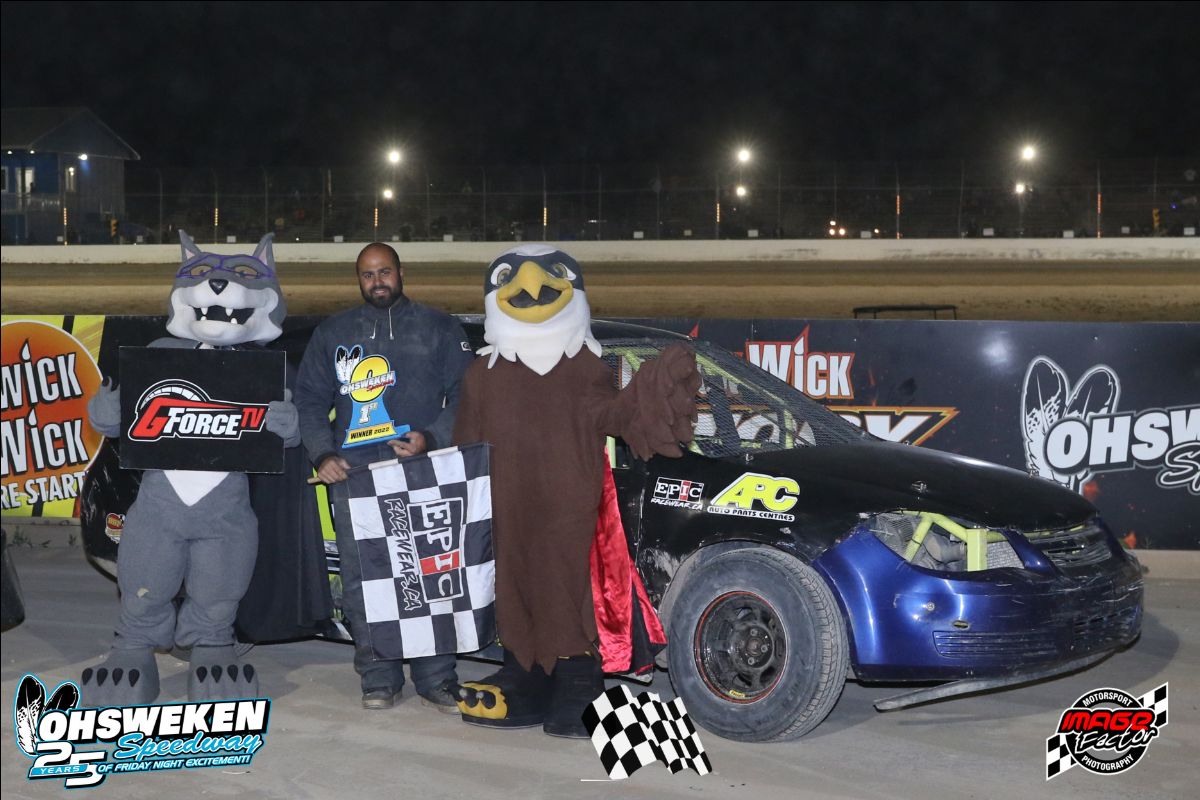 Ryan Hillar finished second, while Matt Nuell rounded out the podium. The top five finished with Thorne and Mike Sarantakos respectively. Lafantaisie left the night with the $1,000 grand prize and a 78 point lead over Nick Erskine.