Kool Kidz-Corr/Pak 360 Sprint Cars
Cory Turner and Nick Sheridan started on the front row to begin the 20 lap 360 Sprint Car A-Main. Sheridan gained a huge lead in the first few laps as the pole sitter while Cory Turner began to be consumed by the pack. Josh Hansen, Sheridan’s rival in recent weeks, caught up and passed Sheridan for the lead. Things got really exciting when a caution came out with ten laps left to go, allowing Sheridan to try to regain the lead from Hansen. Fans had their eyes on these two for the restart, as these drivers have history together; this time however, Hansen was able to hold off Sheridan without incident. Three more cautions ensued within six laps, leaving only four more laps of green flag racing. No one was able to compete with Hansen on the restarts as he cruised his way to his second career victory at Ohsweken Speedway. The win was especially sweet for Hansen after a blown engine last week. Mitch Brown got around Sheridan on the last lap and scored a second place finish, leaving Sheridan to take third. Rounding out the top five were Jim Huppenen and Jake Brown in fourth and fifth respectively. Cory Turner’s eighth place finish allowed him to still retain as the division points leader by five points over his brother Ryan.

Strickland’s Crate Sprint Cars
Eric Gledhill and Ashton VanEvery brought the 28 car field to the green flag for the 20 lap Crate Sprint Car A-Main. Gledhill was penalized for jumping the start, allowing Darren Dryden to restart as the polesitter. Dryden had a perfect restart and quickly put a significant gap between himself and second place. By lap five, Dryden had to begun to navigatetraffic while maintaining race pace. The second caution of the night allowed the rest of the field to catch up and try to challenge Dryden for the lead, but to no avail; Dryden was able to hold off the pack for three more restarts before he saw the checkered flag and picked up his fourth win of the season. 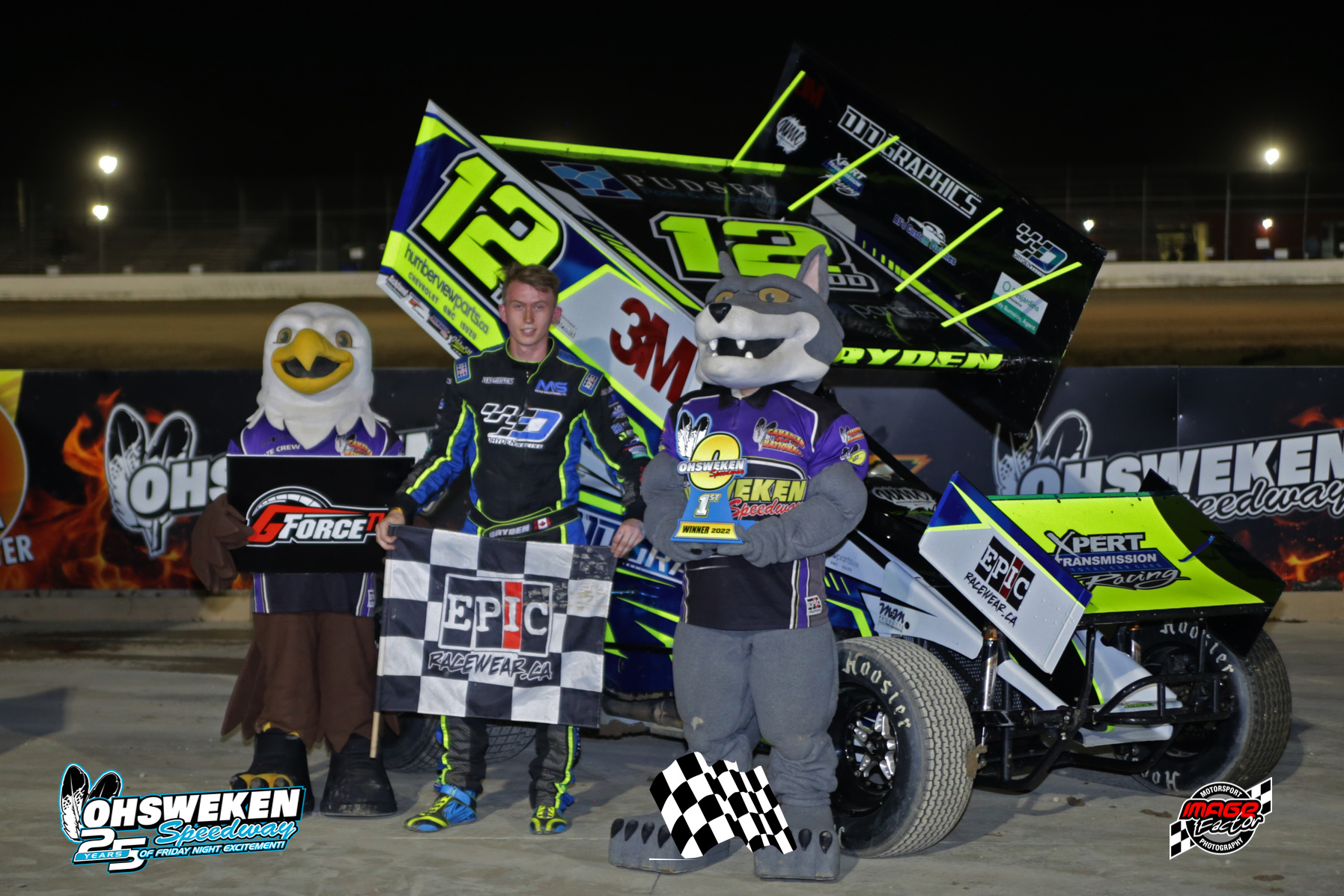 Middleport Mechanical Thunder Stocks
Gofast Teeple started on pole with Kyle Andress next to him for the 20 lap Thunder Stock A-Main. A caution came out on the first lap as several cars got tangled up on turn three, however all the drivers were able to carry on. Points leader Dave Bailey navigated around the wreck, gaining precious positions early in the race. Logan Shwedyk quickly gobbled up Teeple’s lead on the restart and opened a commanding lead over the field. Shwedyk’s lead was short-lived though, as Bailey challenged and overtook him for first with twelve laps left go. 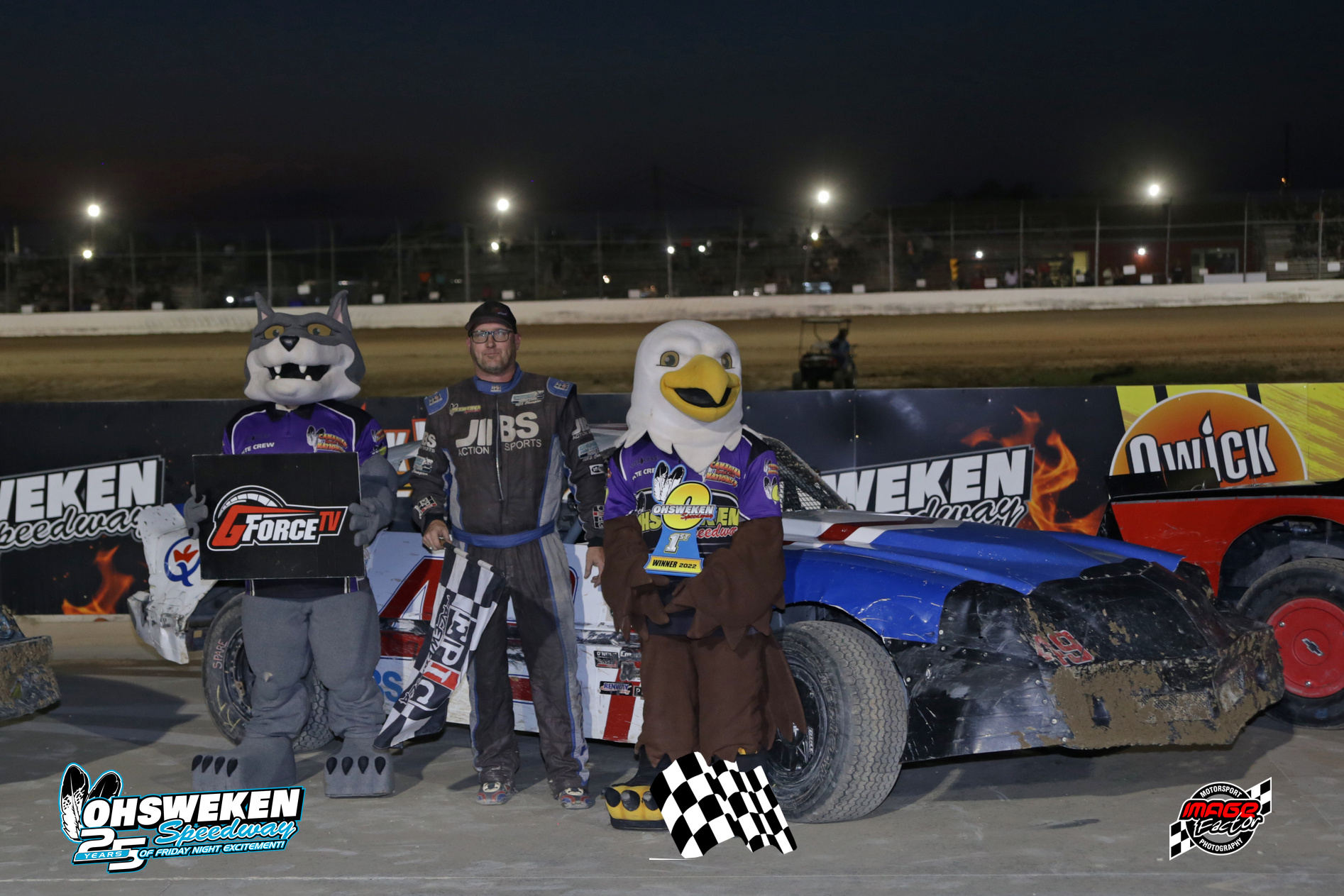 The other title contender, Ryan Beagle, could be found lurking through the pack making his way to third by lap ten. Lap eleven saw a caution for debris on the track, allowing Beagle to gain track position for the restart. Once again the two main title contenders were racing neck-and-neck, much to the enjoyment of the fans. With Mark Fawcett still searching for his first Ohsweken win, he began to close on the leaders with five laps left go, making it a three-way battle for the win. An untimely late caution came out, setting up an epic green-white-checkered finish. Bailey proved once again why he is the current points leader after he held off Beagle and Fawcett for his sixth win of the season. Crossing the finishing line next was Beagle in second, Fawcett third, Trevor DoBoer fourth, and Christopher Hale in fifth. Bailey remains the points leader over Beagle by 41 points.

HRW Automotive Mini Stocks
The front row of the grid featured Paul Longboat and Mike Evers to begin the 15 lap Mini Stock A-Main. Jason Tolton had a great start as he gained the lead within the first few laps after starting sixth. However a caution came out on lap four which allowed Rodney Rutherford to assume the lead after the restart. Points leader Tyler Lafantaisie made his way up to second place after starting 18th due to the weekly handicapping system. Lafantaisie was not close enough to make a run at first place as he had a formidable Wayde Thorne right behind him, allowing Rutherford to maintain a commanding lead. The final caution came out with two laps to go, but Rutherford denied Lafantaisie the victory. 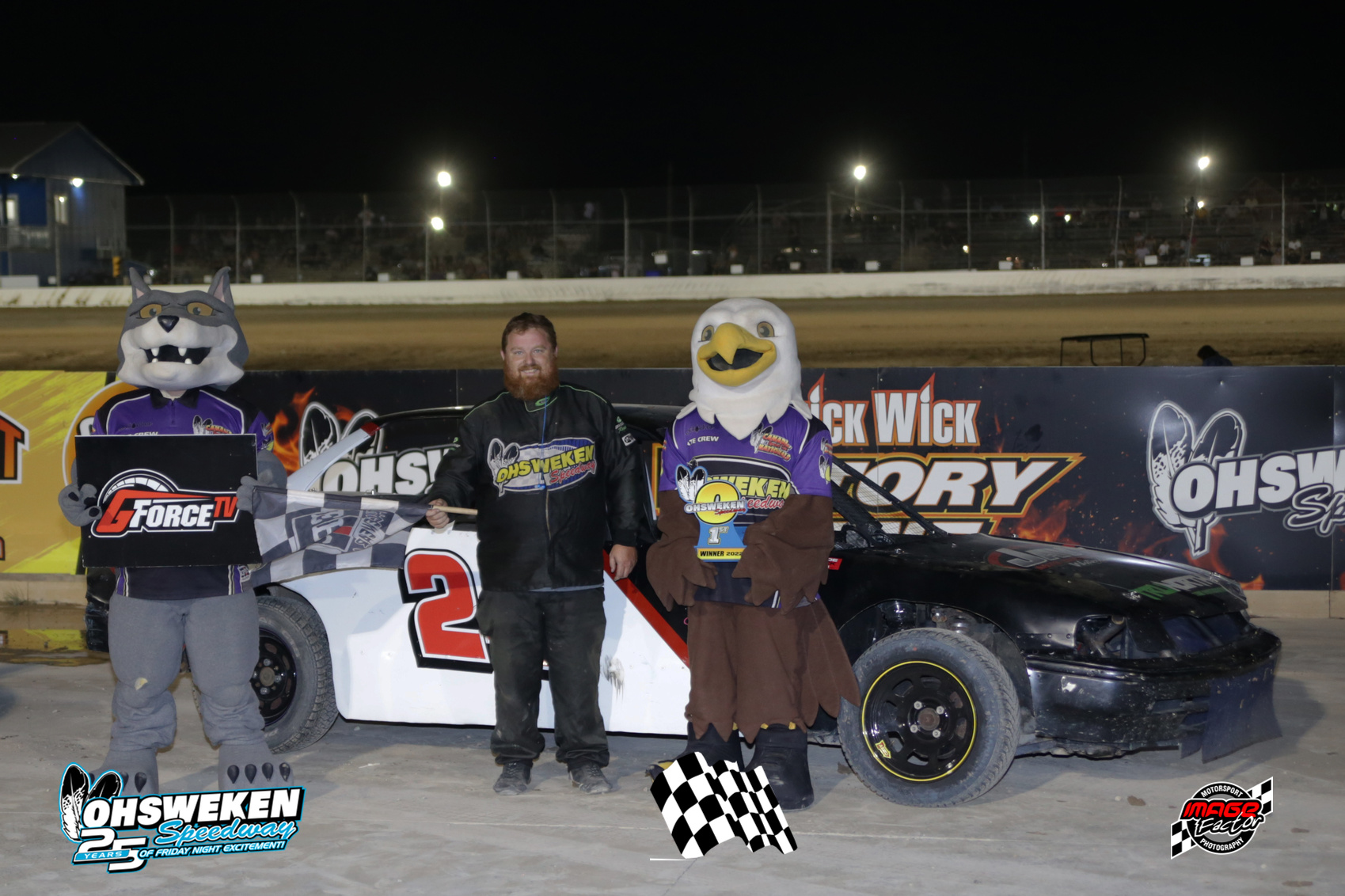