Middleport Mechanical Thunder Stocks
Trevor DeBoer started on pole with Tim Phalen next to him for the ninth running of the Brock Leonard Memorial 50. A caution came out on the fourth lap, nullifying DeBoer’s gap over the field; Ohsweken points leader Dave Bailey was involved in the caution and had to restart in the rear, however his rival for the championship lead Ryan Beagle capitalized on the restart and made his way into the top three. Justin Ramsay finally got around DeBoer for the lead on lap twelve; in the meantime Bailey had passed 16 cars since the caution, making himself a threat again to win his first Brock Leonard Memorial. Beagle however was able to hold off Bailey throughout the entire race amongst the lapped traffic. Justin Ramsay was the driver to beat and picked up the $1,000 victory, becoming the first multiple time winner of the Brock Leonard Memorial 50. The rest of the top five from second to fifth was Beagle, Bailey, Jim Lampman, and Mark Fawcett. Bailey remains the point leader over Beagle by 37 points.

Race of Champions Dirt 602 Sportsman Modified Series
Adam Leslie and Justin Sharp brought the 23 car field to the green flag for the 30 lap Sportsman Modified A-Main. Leslie could not hold off the hard-charging Sharp for the lead after two quick cautions and restarts. Sharp was not able to pull away however, which allowed former Ohsweken Thunder Stock champ Cody McPherson to catch up and take the lead on lap seventeen. McPherson checked out for the rest of the race, even holding off the pack after a late restart to take the $2,000 win. 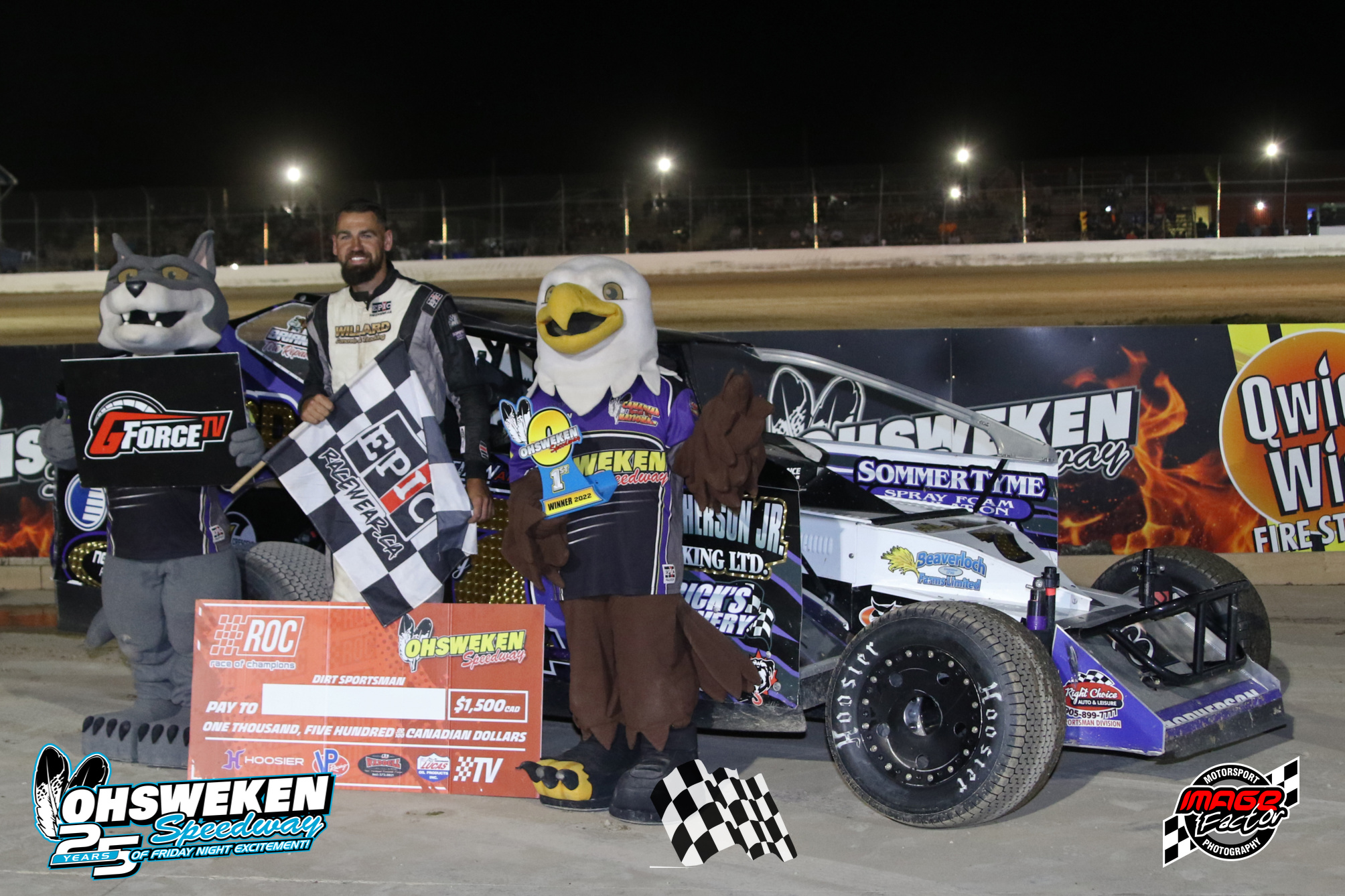 Sharp and Bill Bleich rounded out the podium in second and third respectively. Polesitter Leslie dropped three positions, crossing the finish line in fourth with Ohsweken Wall of Famer Jay Mallory in fifth.

Strickland’s Crate Sprint Cars
Mack DeMan and Lucas Smith brought the 28 car field to the green flag for the 20 lap Crate Sprint Car A-Main. DeMan got off to an amazing start as he already began to encounter traffic by lap five, however Smith was able to close the gap until a red flag came out for a Darren Dryden flip. A dejected Dryden was able to pull himself out of the wrecked vehicle under his own power. The crash put Dryden’s championship hopes in jeopardy after already picking up four wins this season. DeMan held off Smith for three more restarts before the checkered flag came out for DeMan’s win. 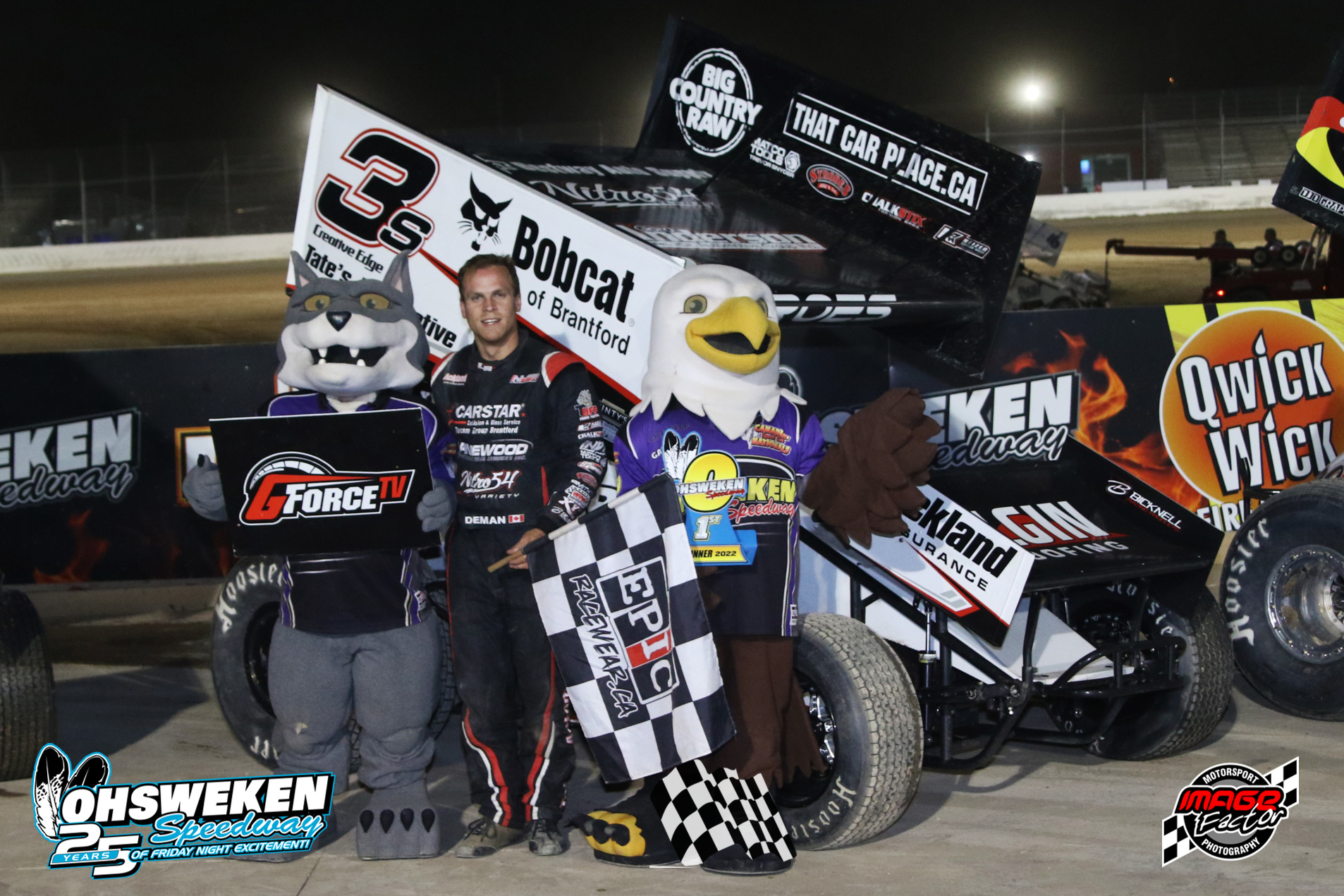 Now a 360 Sprint Car regular, DeMan was filling in for Ackland Racing teammate Austin Roes to work out any problems in the car for the upcoming Action Sprint Tour races on Monday and Tuesday at Ohsweken. The win was DeMan’s 13th in Crate Sprint Car competition at Ohsweken, which leads the all-time list. Lucas Smith finished second, Jacob Dykstra third, Jesse Costa fourth, and Eric Gledhill fifth. Smith once again left the night as the division points leader with 30 points over Gledhill.

HRW Automotive Mini Stocks
The front row of the grid featured Paul Longboat and Jason Tolton to begin the 15 lap Mini Stock A-Main. In a repeat of last week, Jason Tolton had a great start as he overtook Longboat for the lead by lap two. A caution came out on lap six which allowed Tyler Lafantaisie to make his way to the third spot after starting in the nineteenth position. Jeremy Hughes saw his first victory of the season slip away as Lafantaisie passed him for the lead with three laps to go. 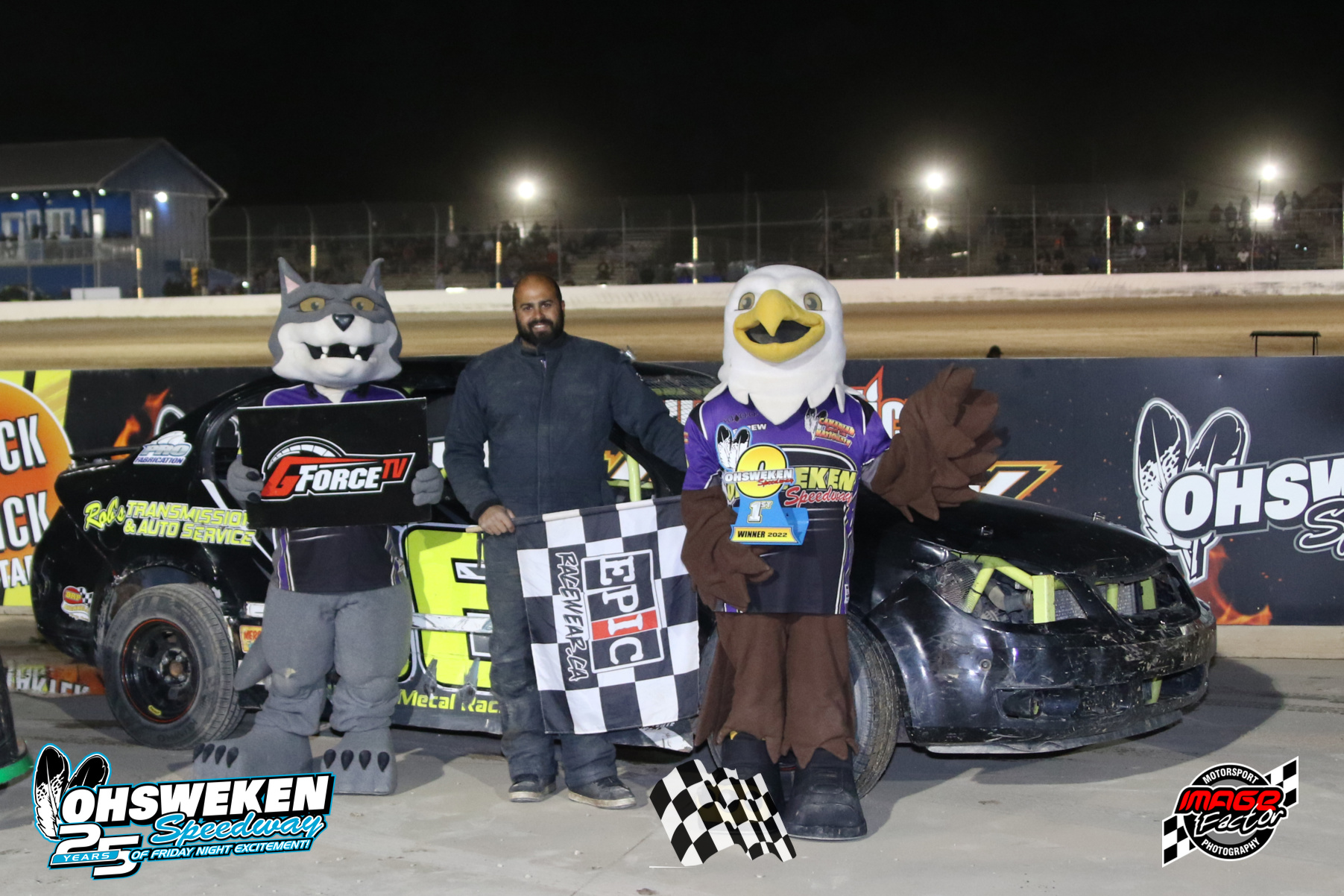 The win was Lafantaisie’s sixth of the season at Ohsweken. Hughes finished second, Tolton third, Wayde Thorne fourth, and Dusty DeBoer fifth. Lafantaisie added to his already comfortable gap in the championship standings over Fabio Oliveri, which now stands at 130 points.