OHSWEKEN, Ont. (June 24, 2022) – With $2,000 on the line, 41 drivers entered to race in the Gale’s Cash Blast 50 for Middleport Mechanical Thunder Stocks at Ohsweken Speedway, but it was Dave Bailey who won the race and left with his pockets full of cash. The other three classes saw Liam Martin, Eric Gledhill, and Fabio Olivieri take victories.

Kool Kidz-Corr/Pak 360 Sprint Cars
Cory Turner and Liam Martin led the pack to the green flag for the 20 lap 360 Sprint Car A-Main and quickly battled for first. Mitch Brown appeared to have braking issues in the early going as his brakes began to spark, however he was able to keep the pace up. The caution came out on lap six when Mack DeMan made contact with the inside wall of turn two, causing major wheel damage. Martin made the winning move on Cory Turner as they encountered traffic with nine laps to go, passing both Turner and a lapped car. Martin raced his way to his exciting first career 360 Sprint Car race win. Nick Sheridan used the outside groove to earn a solid second place as he passed four cars in the last three laps. Ryan Turner gained valuable points with a third place finish, moving him to the top of the championship standings and two points ahead of his brother Cory. Josh Hansen moved up to race in the top three before settling for fourth, while Cory Turner rounded out the top five.

Strickland’s Crate Sprint Cars
Jesse Costa and Eric Gledhill started on the front row for the 20 lap Crate Sprint Car A-Main. Lucas Smith quickly showed dominance as he made his way from fourth to first in a matter of two laps. It seemed like Smith had the race under control as he was able to fend off the pack through cautions, but a broken nose wing mount caused handling issues for Smith. Gledhill was able to capitalize on the third restart and gain the lead. Gledhill had to hold off the wild card of Modified veteran Mike Bowman for three more restarts to gain his first career Crate Sprint win after coming so close last year. 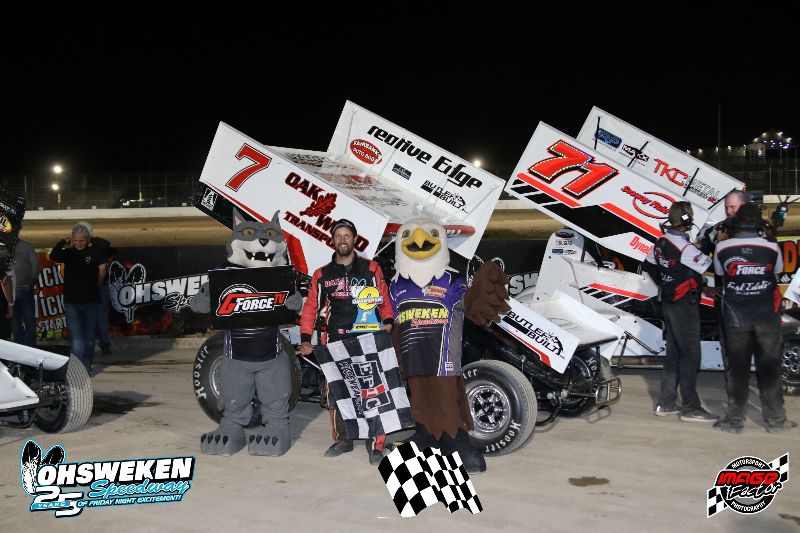 After all the dust was settled it was Bowman – also with nose wing issues – and Smith who joined Gledhill at the Qwick Wick Victory Lane. Matt Billings took the fourth spot in his first Ohsweken appearance of 2022 and Brett Stratford rounded out the top five. Darren Dryden finished ninth and remains the overall points leader of the Crate Sprint Cars by one point over Eric Gledhill.

Middleport Mechanical Thunder Stocks
Tim Phalen started on pole with Ron Loggie next to him for the 50 lap Gale’s Cash Blast Thunder Stock A-Main. With a $2,000 prize for the winner on the line everyone was trying to get to the front of the pack, leading to the first caution on lap two for a melee involving many drivers. Unfortunately for Adam Plazek, Mark Fawcett, and Rob Hoskins, their cars sustained the most damage and they were unable to continue with the race. Dave Bailey made quick work of the pack to move up 15 positions within five laps to gain the lead, creating a gap of over two seconds by lap 12. 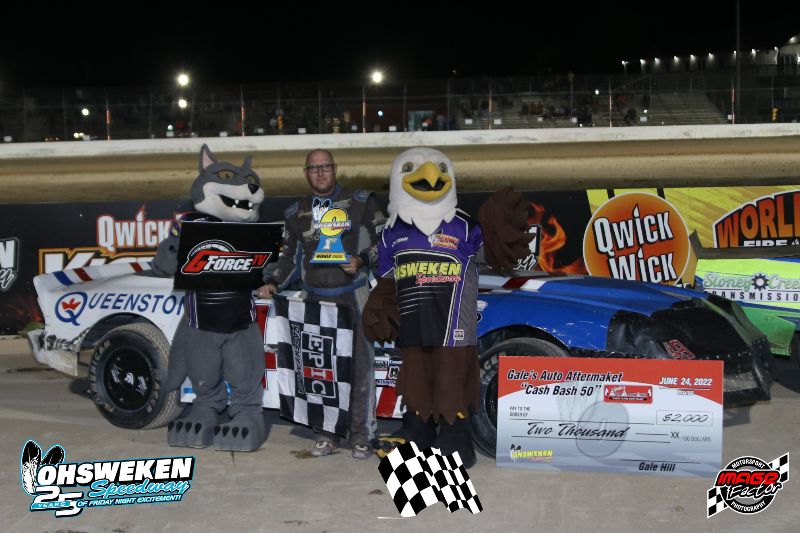 However the main battle was between Kyle Wert, Ryan Beagle, and Jim Lampman for the third position, while B-Main winner Christopher Hale marched forward until Ron Loggie spun from contact with Trevor DeBoer to bring out the second caution. Once the race got underway Bailey took a commanding lead over the pack, but all eyes were on Beagle as he overtook Hale for second and began gnawing away at Bailey’s lead. With only six laps left to go, Beagle was basically banging at the back door of Bailey when the unthinkable happened – polesitter Phalen got loose just as he was going a lap down and clipped Beagle. Beagle suffered a cut down tire which took him out of the running to win the race. Hale made a last minute charge for the win but came up short by only 0.063 seconds to Bailey, while Loggie was able to recover for third place. Bailey left the race not only $2,000 richer but also 21 points ahead of Hale in the championship standings.

HRW Automotive Mini Stocks
Rob Twitchett and Wayde Thorne were on the front row to begin the 15 lap Mini Stock A-Main. The first caution of the night came out on lap two when Tim Nuell got sideways and Ryan Hillar clipped him, also collecting Christopher French and Matt Nuell. French was unable to carry on due to the damage from the incident. Fabio Olivieri was on a mission, gaining nine positions to take the lead away from Thorne. The second caution came out for Ashton Dickie as he experienced steering issues and came to a stop on the high side of turn four. Tyler Lafantaisie wanted to maintain his streak of winning each race this season, but Olivieri managed to hold him off for the win. 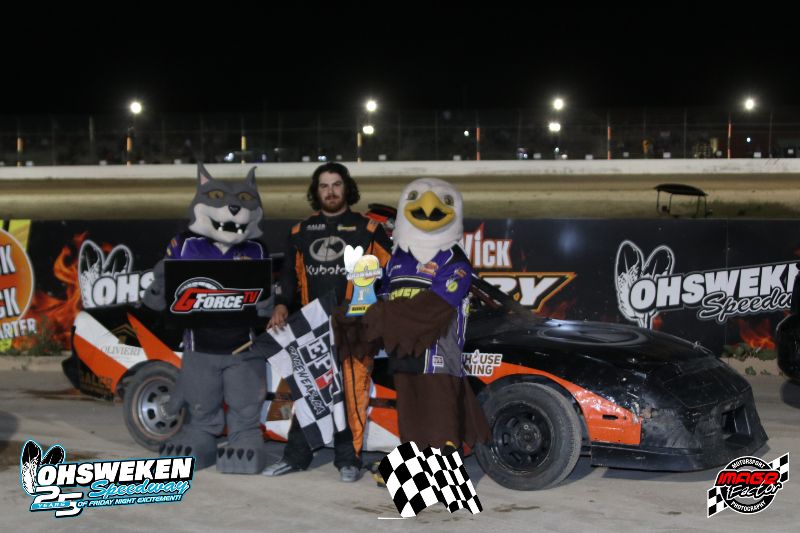 Lafantaisie was able to maintain his podium streak with a second place finish, with Thorne finishing third, Eric Yorke fourth, and Tim DeBoer fifth. Lafantaisie had a good points day and maintained his lead in the Mini Stock standings, 41 points ahead of second place Jason Tolton.