In the January 8th edition of Spencer Lewis’ Short Track Notebook, we bring you up to speed on a returning OSCAAR tour champion, Paul Maltese’s brand new endeavor for 2014, a Delaware Truck veteran that will find a new home in the Super Stock division this Summer and one of our most popular interviews of the year with a multi-time Thunder Car champion.

Sunset Speedway Super Stock regular Paul Maltese has announced he will compete for Rookie of the Year honours in the speedway’s Ltd. Late Model division in 2014. Maltese, a former Sunset champion and Autumn Colours Classic winner, has acquired a chassis formerly campaigned by Late Model veteran Steve Laking. The chassis has received a litany of upgrades from noted chassis specialist Mike McColl and McColl Racing Enterprises in recent weeks. Jamie Sutton will serve as Crew Chief for the team, after departing Sean Grosman’s SMG Motorsports at the conclusion of 2013. In addition to a full schedule of Ltd. Late Model racing at Sunset, the Innisfil, ON driver will compete in select Pro Late Model events throughout the Summer. Maltese has announced that longtime sponsors Presto Appliance Repair, Ontario Steel Sales, Curbex Signs, South Simcoe Police, M.A.D.D, Crime Stoppers, Wix, Gunk, NGK Spark Plugs, Permatex and TSS Top Shops will return to sponsor their 2014 effort. Maltese will debut the new look Ltd. Late Model in a future Short Track Notebook update, fans can follow Paul on Twitter @PaulMaltese28 for updates on the team in the coming weeks. 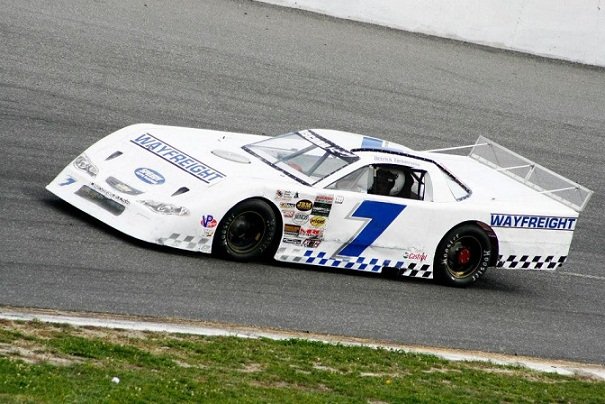 2007 OSCAAR Super Late Model champion Derrick Tiemersma (above, by Dan Little Jr.) has confirmed he will return to the tour fulltime in 2014 to chase a second championship. The Newmarket, ON driver – a former Don Biederman Memorial champion – is in the process of mounting a new-look body on his familiar #7, and will return to action in the Spring with an engine package powered by Matt Pettit and Speedy Auto Machine. Tiemersma joins a growing list of drivers that have committed to following the tour fulltime in 2014, including Brad Corcoran, Dave Taylor and Dave Doucette. With Brandon Watson’s announcement at the conclusion of 2013 that he would not return to the tour this season, OSCAAR is guaranteed not to have a repeat champion for the first time since 2012. 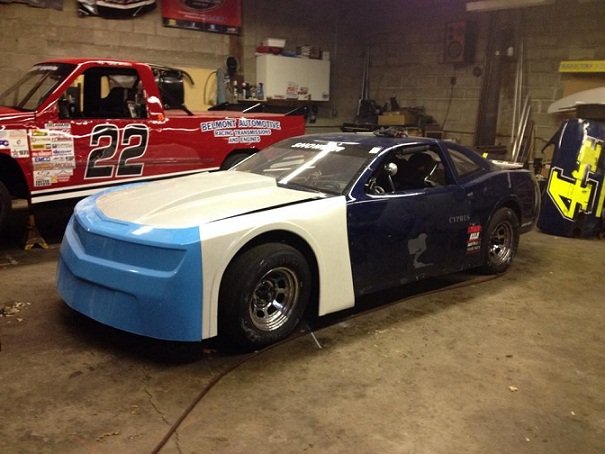 2013 Delaware Speedway truck champion Gary Adriaensen has confirmed he will move to the Super Stock division in 2014, as he prepares a fulltime campaign in one of the province’s most talent-laden support classes. The Belmon, ON veteran dominated the Truck division this season, earning 6 feature victories en route to his second straight division title. Adriaensen has acquired Jeff Showler’s 2013 championship-winning Super Stock and is in the process of making his final updates before readying the car for paint in the coming weeks. Marketing support for Adriaensen’s Rookie of the Year crusade will come from Dowler Karn Fuels, Concorde Distributing, Jim’s Speed Equipment, Ultimate Sandblasting & Coatings, Speedpro Imaging of London, IBEW Local 120, Belmont Automotive and Great Lakes Photography. Fans are encouraged to follow the team on Twitter @55GaryA for additional photos and updates as their ready themselves for the rapidly approaching 2014 season.

The 2013 Autumn Colours Classic provided the perfect backdrop for us to catch up with multi-time Thunder Car champion John Baker Jr. (above, by Thompson Photography). The second-generation driver, a divisional legend, speaks on his history in the Thunder Car class and the lineage of his current chassis. Baker also goes into detail about his views on the current state of Thunder Car racing and where he sees it heading in the coming years. This video became somewhat of a viral sensation when first released over the Christmas holidays and has quickly turned into one of our favourite interviews of 2013. Click here for the entire 8-minute long chat with JBJ.