OSCAAR Super Late Model tour regular Andrew Gresel has announced he will compete in the 2014 edition of New Smyrna Speedway’s World Series of Asphalt Stock Car Racing. The Hepworth, ON driver will file an entry for the Crate Late Model division, a class that has featured a wealth of Canadian talent in previous seasons. Longtime team member Gareth Gonder will return to Crew Chief the team’s effort, as they campaign the same chassis that Gresel utilized to win the 2011 Delaware Speedway Late Model championship. A New Smyrna veteran, Gresel will return to the World Series for the first time since 2012, where he earned a 12th place finish in the 9-night championship standings. Marketing support for Gresel will come from Sauble Falls Tent & Trailer Park, London Recreational, Shoreline Property Management and HyGrade Roofing. Fans can follow the team on Twitter @SaubleFalls81 as they make the final preparations for the February 14th-22nd mini-season. Milton, ON veteran Brad Corcoran (above, by Dan Craik) has announced he will race fulltime on the OSCAAR Super Late Model tour in 2014. The Former Pro Late Model standout competed in 6 OSCAAR events in 2013, highlighted by a 3rd place finish at Peterborough Speedway on August 24th. Corcoran joins Dave Doucette on a growing list of drivers who have committed to running a full schedule this season. With OSCAAR’s annual rules meeting in the rearview mirror, expect to see that list grow in the coming weeks. Ontario Pro Challenge Series regular Kyle Batty has sent along these ‘in progress’ shots of his newly acquired Ltd. Late Model, offering a sneak peek of his plans for the 2014 campaign. The Markham, ON driver acquired the Chuck Lawler-built chassis from veteran Andy Kamrath at the closing of 2013. Batty will return to the Ontario Pro Challenge Series fulltime in 2014, but will make part time appearances in his Ltd. Late Model at Sunset Speedway in order to gain as much seat time as possible. Follow Kyle on Twitter @KyleBatty38. 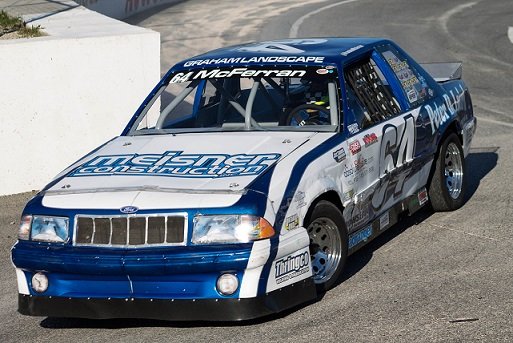 We recently had a chance to chat with Mini Stock division standout Brandon McFerran (above, by Thompson Photography). ‘The Astronaut’ tells us all about his 2013 season, his decision to compete for a Sunset Speedway championship in 2014, his divisional goals before moving to the Super Stock division and his views and predictions for the much-hyped OSCAAR Mini Stock Nationals. Click here for the interview and follow Brandon on Twitter @BrandonMcFerran.