In the December 4th edition of Spencer Lewis’ Short Track Notebook, we break the news on the newest edition to the OSCAAR Super Late Model roster, follow up with a Canadian headed for 5 Flags Speedway’s Snowflake 100, chat with Modified competitor Justin Jones and feature the OSCAAR Modified Tour edition of our Bench Racing series featuring Dave Gainforth, Shane Stickel and Davey Terry.

Thunder Car veteran Dave Doucette has announced this week he will head out on tour with the OSCAAR Super Late Models in 2014. ‘The Deuce’ earned a division title at Barrie Speedway in 2007 as well as an Autumn Colours Classic championship in 2009, competing for his family-owned Xtreme Racing team. The Angus, ON driver has liquidated his Thunder Car assets, and obtained a Howe chassis to begin preperations for his inaugural venture into the Super Late Model division. Doucette hopes to contend for 2014 Rookie of the Year honours, and if marketing support can be found, plans to follow the tour across Ontario. Doucette will offer Inside Track the first glimpse at the car later this off-season. 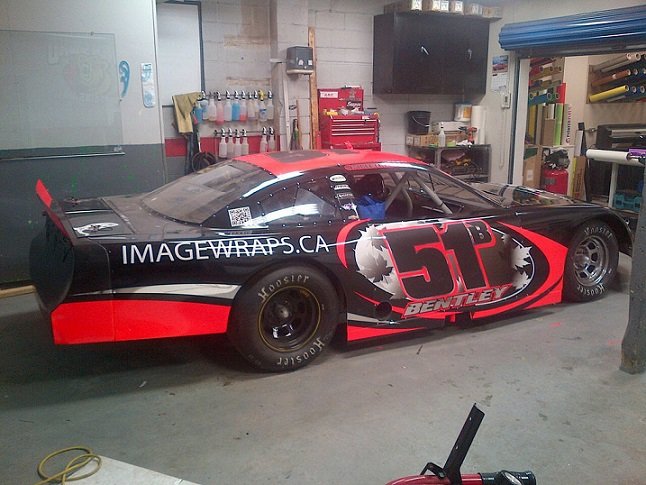 Here’s our first look at 2013 Sunset Speedway Ltd. Late Model champion Mike ‘Lights Out’ Bentley’s ride for the upcoming Snowflake 100 at Pensacola’s 5 Flags Speedway. The Guelph, ON driver will pilot a Grand American Race Cars chassis, out of Shaun McWhirter’s Streamline Race Products shop, for his first career venture outside of Ontario. ‘Lights Out’ will enter the marquee Pro Late Model event riding a wave of momentum, after earning his second straight Autumn Colours Classic title at Peterborough Speedway in October. He’ll be joined in the pit area by fellow Canadians Alex Guenette, Lonnie Sommerville, Alex Labbe and Cole Powell. The head-turning design comes courtesy of ImageWraps.ca founders Doug & Craig Kamrath, and is sure to contend for ‘Best Appearing’ honours before the weekend is through. Fans can follow Bentley on Twitter @MikeBentley51.

Earlier this season, we had the opportunity to catch up with Sault Ste. Marie, ON Modified driver Justin Jones (above, by Thompson Photography). The former Mini Stock standout – and Laird International Raceway regular – finished the tail end of 2013 with the OSCAAR Modified Tour and hopes to do more travelling in 2014. Jones also speaks candidly about the beginning of his career, his versatility as a driver, familiarizing with the OSCAAR tour and the comparison between Laird Int’l and the rest of Ontario. Click here for the video. 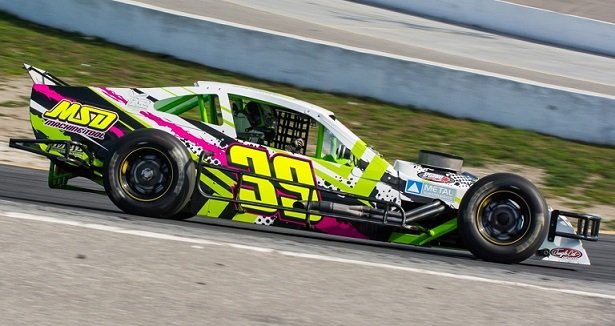 The 11th edition of our Bench Racing series is now online, and it focuses heavily on the sophomore OSCAAR Modified Tour. We sit down with tour president Dave Gainforth, 2012 Rookie of the Year Davey Terry and 2013 rookie contender Shane Stickel (above, by Thompson Photography) and discuss the tour’s first two seasons, its future in the province, the different chassis combinations represented on the roster, the budget required for a start-up team and much, much more. Click here for the episode, and be sure to check out our Youtube channel for more Bench Racing content.