GRAND BEND, ON – Although it wasn’t as dominating of a performance as he put on during his win last month at the Canadian Nitro Nationals, Paul Noakes still managed to put his best foot forward en route to claiming his second NDRA Alcohol Funny Car Series presented by Ohsweken Speedway victory during the Stratford Spectacular Hot August Nationals in Grand Bend, ON, this past weekend.

After qualifying number one by just four one-thousandths of a second over series points leader Larry Dobb’s, Noakes and tuner Les Mellows mastered the tricky Grand Bend Motorplex race surface, running a 5.73 in the final, just one one-hundredth of a second off of their first round elapsed time. “It was a tough race track and it got us in the second round,” said a pleased Noakes. “Luckily we had a bye and the track came around and showed us what we could do in the final.”

“It’s a testament to the hard work of all my crew and my sponsors,” noted Noakes. “Ive gotta give a special thanks to Jay Johnson and his son Ian for helping me find my sponsors Meritor and Euclid. And I’ve definitely gotta thank my wife and my daughter for putting up with me all summer long. I don’t spend a lot of time with them because I spend all of it working on this race car.”

In winning the race and qualifying number one, Noakes kept his perfect record alive in NDRA competition, having qualified number one and winning the event in both of his appearances with the series this season. “Hats off to Les again. He saw the challenge the first run and we made a change for the second (during qualifying),” said Noakes. “We came out today and ran just as fast in the final as we did in the first round which just goes to show all the different conditions and that he can adapt to anything. We really hit our stride today.”

For Ron Bankes and his Bankes Marine Services team, Sundays showing was one of storybook proportions as he not only made his first race day start, after suffering through parts breakage at the first two events, but he showed steady improvement all weekend long and managed to take home a runner-up finish. “Just to see the car go down the track for the first time this year, all the work we’ve done. It’s great,” said an emotional Bankes. “We tried to tune it up a little bit (in the final). Not that we were ever gonna run close to him (referring to Noakes) but we just wanted to see if we could get it to run a little bit quicker to leave the race with a better pass.”

In winning the event Noakes made a significant move towards the top of the series point’s standings but with sponsor obligations to run the NHRA U.S. Nationals in Indianapolis, Indiana, rather than the final NDRA Alcohol Funny Car Series event at Cayuga Dragway, over the Labor Day Weekend, the points chase still remains wide open. 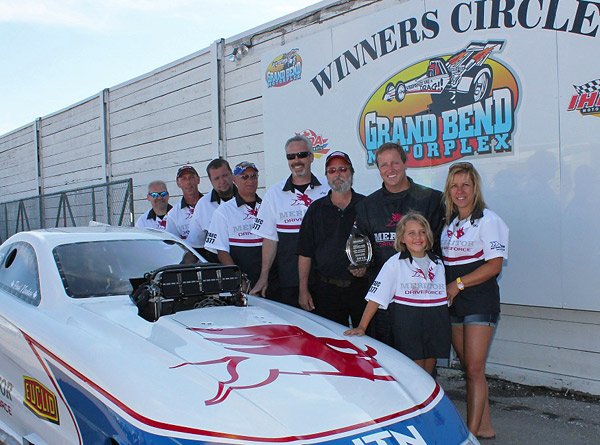 The next and final event in the 2012 season for the NDRA Alcohol Funny Car Series presented by Ohsweken Speedway is scheduled for September 1 – 2 at Toronto Motorsports Park in Cayuga, ON. For more information about the NDRA and for full race results and points standings visit www.ndra.ca.