KITCHENER, ON – The NDRA Alcohol Funny Car Series presented by Ohsweken Speedway will be a featured part of the Stratford Spectacular Hot August Nationals, presented by NAPA Auto Parts & Ideal Supply, at Grand Bend Motorplex August 10-12, along with the PMRA, Quick 32, PBSS and a handful of nitro methane burning machines.

The third event in the four-race NDRA Alcohol Funny Car Series marks a return to the track that hosted the first event in series’ history earlier this season. “We’re very happy to be returning to Grand Bend for the second time this season and with the momentum we gained at our last race we’re looking forward to putting on a great show at the Stratford Spectacular,” said Series President & Director of Operations Dale Boeru.

The last event yielded an impressive performance from Paul Noakes and his Meritor/Euclid sponsored Mustang, adding another angle to the already tight series championship chase. The current point’s leader is Larry Dobbs of Welland, ONwho won the first event in series history back in May. Dobbs is followed by Vince Rastelli of Gasport, NY, runner-up at the first event, and Brian White of Cicero, NY, sits third after a runner-up finish at the Canadian Nitro Nationals in June. Noakes currently sits fifth in the standings, having attended only one event thus far, and could make things interesting should he be able to repeat his performance from the last event. 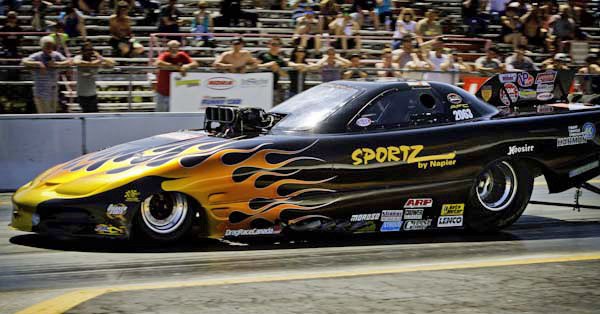 Joining the NDRA Alcohol Funny Car Series presented by Ohsweken Speedway at the Stratford Spectacular Hot August Nationals will be a plethora of nitro methane fueled vehicles. The line-up will include a trio of Nitro Harley Davidson motorcycles, the fastest of which is piloted by Rob Brown, as well as the Pony Up Mustang Nostalgia Nitro Funny Car of Gary Kraus. Smax Smith will also take some shots at the quarter-mile with his Leverich Racing Top Fuel Dragster.

This event will also be the sixth, in the seven race Pro Modified Racing Association series, and will include the Quick 32 Series presented by NAPA Auto Parts, as well as the Wiseco Pro Bike and Sled Series, all mainstays on the Ontario racing scene.

For more information about the NDRA and for full race results and points standings visit www.ndra.ca.

Camirand steals the show at GP3R