Pinty’s Knights of Thunder 360 Sprint Car Series
Paulie Colagiovanni and Jordan Thomas started first and second respectively to begin the Knights of Thunder A-Main. 30 drivers qualified for the 35 lap race, all of them racing to be the champion of the 17th Running of the Canadian Sprint Car Nationals. Colagiovanni put a commanding lead on the field while Cory Turner and Thomas contended for the second spot. NASCAR Truck Series driver Stewart Friesen began to make his way through the pack from row five and began to challenge for third place with nineteen laps left. Dylan Westbrook ended a bid to win his first CSCN early with mechanical problems. It was all smooth sailing for Colagiovanni until the only caution of the night came out with nine laps to go, as Shone Evans spun and came to a stop on the track. Friesen gave everything he had left in the tank but Colagiovanni prevailed and crossed the finish line first, taking his first CSCN win after being the runner-up in his last attempt. Friesen finished second, Cory Turner third, Jordan Thomas fourth, and Mitch Brown fifth.

Notes
-Dylan Westbrook’s quick time in Qualifications earned him both the Qwick Wick Fastest Qualifier Award and the Fastest Canadian Qualifier Award.
-Liam Martin won the Larry Gartly Memorial Last Chance Hard Charger Award presented by Doddey Creek Agri Services for advancing from the B-Main and gaining the most combined positions between the B-Main and A-Main. Martin started fourth in the B-Main and drove from 27th to 16th in the A-Main.
-Nick Sheridan won the Nitro 54 Variety Hard Charger Award for his drive from 20th to sixth in the A-Main.

Action Sprint Tour Crate Sprint Car series fueled by Pinty’s
The Action Sprint Tour Series returned back to Ohsweken Speedway for the second time this season, and Mathieu Bardier and Jacob Dykstra brought the 24 car field to the green flag. Mike Bowman shot out of a cannon and quickly overtook Bardier and Dykstra for the lead. Bardier quickly began to fall down the order as Lucas Smith moved up to the third position. With two laps left go Bowman was driving as if he was on rails, well over eleven seconds ahead of the pack; Bowman was about to put the sixth place car a lap down when a red flag came out for a collision between Smith and Joshua Hill. Hill’s car flipped on its side; both drivers were unharmed but the vehicles sustained too much damage to carry on racing. The race ended on a green-white-checkered finish; Bowman was again untouchable and sped off for the win making it his fourth Crate Sprint Car victory of the season, and first at Ohsweken. 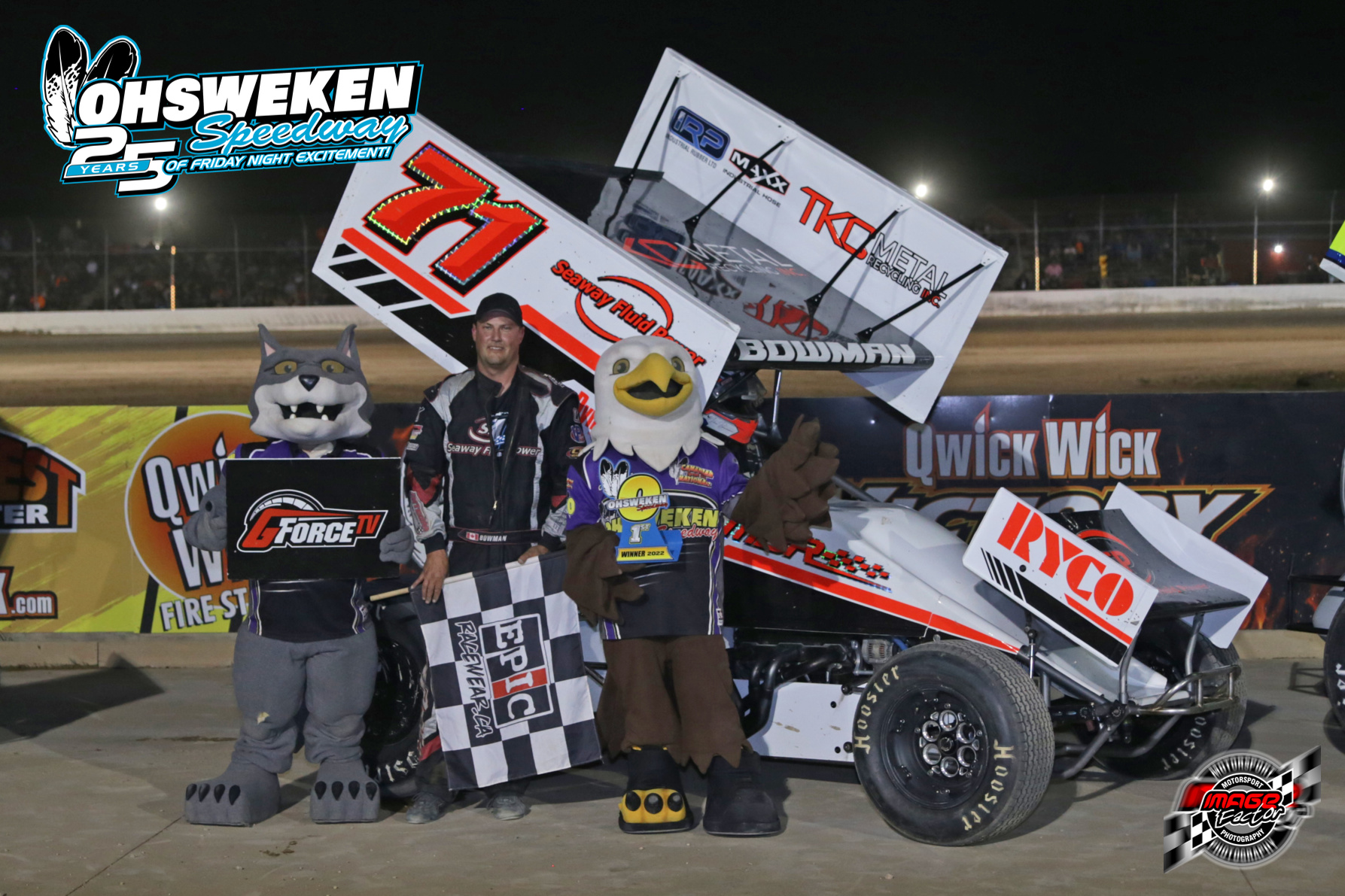