<< Every issue of Inside Track Motorsport News features news, features, profiles and commentary about Canadian motorsports that you can’t get anywhere else. Subscribe today. >>

The third-generation star scored a career best 4th place finish at Toledo in 2010 in an ASA North Crate Late Model event. The Stayner, ON driver will campaign the same Hamke by Brian MacDonald chassis that earned a podium finish in February’s Bruce Gowland Memorial at New Smyrna Speedway.

Marketing support for Watson will come from Shear Metal Products, Royal Distributing, Barrie Frame & Alignment, The Smart Exchange and Knightworks Designs. Fans can keep up with Watson’s preparations in the coming days via his @BrandonWatson15 Twitter account, or his brand new Brandon Watson Racing Facebook page. 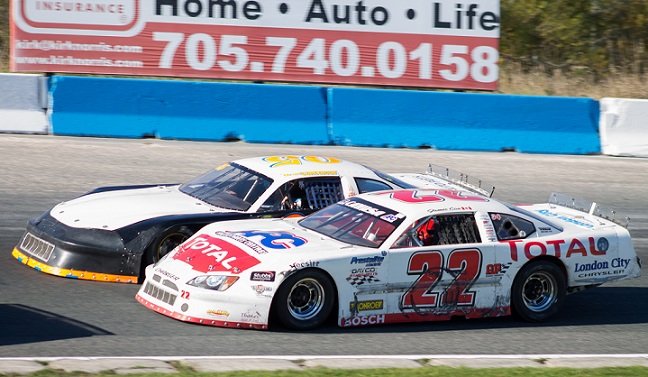 2013 Delaware Speedway Late Model champion Jamie Cox (above, by Thompson Photography) has filed entry for Sunset Speedway’s APC Pro Late Model 100. The $5,000-to win event is expected to draw some of the biggest Pro Late Model names in the province, as well as a number of hometrack Ltd. Late Model competitors. The Dorchester, ON driver was long considered one of the top Open Wheel Modified drivers in the province, earning 9 track championships in the division before moving to the Pro Late Model class in 2011. ‘The Flamethrower’ will enter with help from sponsors APC and Total.

2011 Grisdale Triple Crown champion David Elliott has announced he will return to active competition in 2014. The Ancaster, ON driver took a hiatus from racing in 2013, after finishing 4th in points at Delaware Speedway in 2012.

The second generation wheelman will race a 6-race limited schedule at Flamboro Speedway. Elliott will be supported through his 2014 campaign by ATD Hydraulic and Mechanical, Selectronic Technical Services and Hickory Dickory Decks. David’s complete 2014 schedule is listed below.

Here’s our first look at Flamboro Speedway Mini Stock competitor Hudson Nagy’s ride for the upcoming season. The second generation racer hopes to contend for 2014 Rookie of the Year honours, after graduating from the Waterloo Regional Kart Club.

We recently caught up with Bridge, and the veteran competitor had this to say about the upcoming event.

“I can’t wait to fly around that big wide oval alongside some of the best in the province. This event is huge for the Mini Stock division. The hype surrounding the Nationals is massive, it’s all that any Mini Stock competitor can talk about…and when you have guys talking this much, you know it’s going to be huge. Bringing home the hardware would be one of the biggest honours of my career. It’s likely to be the biggest and most well attended Mini Stock race to date. I’m looking forward to going up against some of the best in the province. I feel as though I have a lot to prove after my showing at the Velocity last season”.

To date, Bridge is the lone Sauble regular registered for the event, against a very strong Peterborough and Sunset Speedway contingent.