BRIGHTON, ON – A full house filled the stands at Brighton Speedway on Saturday as Watson Building Supplies and Aaron Auto presented the first ever SOS Showdown brought to you by Ultramar. Up for grabs was a top prize of $2,500.00 to the winner of the 25-lap main event, which as the biggest payout ever for an SOS event.

The action on the track was as hot as the weather; the track was super-fast for the heats that saw Warren Mahoney and local favorite Charlie Sandercock take home the heat wins assuring themselves of spots in the redraw. However it was the #0 Glen Styres who by virtue of a third place finish in his heat was in the redraw and was able to pull out the poll position pill to start up front in the main event. Styres who has ten feature wins to his credit at Brighton would start alongside current point leader and 2011 Champion Lee Ladouceur.

For the initial green flag of the first ever Watson Building Supplies, Aaron Auto and Ultramar SOS Showdown, Glen “the Ohsweken Flyer” Styres would start on the bottom with Ladouceur on the high side however it didn’t take long for the two drivers to switch positions and Styres would go right to the top while Ladouceur would drop to the inside and run right down on the tires where there was still some bite.

The two would stay that way for some time while #42 Rick Wilson would be close in tow trying both the high side and low side trying to find a line that would allow him to gain on the two leaders. #57 of Charlie Sandercock in only his third sprint car race was working to improve on his sixth place starting spot and would make his way around the #25 Warren Mahoney and #30 Adam West. Sandercock would then start to apply pressure to Wilson and would try and work underneath him.

Sandercock was actually able to pass Wilson coming out of turn two and going into turn three however Wilson would rocket of the high side of turn four and take back the advantage. The duo waged this exciting battle for a number of laps and Wilson would actually have to change his line and move to the bottom of turns 1 and 2 in order to take Sandercock’s line away and keep him behind him. Meanwhile out front Styres was cruising along with a 4 car lead over Ladouceur however the two would start to encounter lapped traffic.

The slower cars would slow Styres up just a bit as he moved around the #15 of Mike Farrell and the #66 Frank Baranowski. Ladouceur was closing in and charging hard with two laps to go as Styres would close in on #2 Brad Lodge and #9 Jim Munsie. Styres would pass Lodge on the high side as they came to the white flag as and would come up behind Munsie. Styres would have to lift going into turns one and two and Ladouceur was right on his back bumper.

The three cars would race up the back straight going into turn three and Munsie would push up a little high into turn for opening up the bottom for Ladouceur where he had been so good all night. Coming out of turn four it was a drag race to the finish line in a photo finish! The crowd sat silent waiting in anticipation for announcer Huck Flindall to let them know the official scorers decision and moments later there was a roar from the crowd as they announce Styres was the official winner.

The win marked Styres 11th win all time at Brighton Speedway but his first win since Labour Day Saturday of 2009. Ladouceur’s strong run allows him to strengthen his points lead five points events left on the SOS schedule. The two drivers also qualified for the 10 lap “Ohsweken Shootout” on September 14th during Canadian Sprint Car Nationals weekend. The shootout pits two drivers from each of the 5 co-sanctioning Canadian Nationals organizations plus two “Wild Card” entries in the first race of the weekend. Wilson would hold of Sandercock to come home third and fourth respectively while #5 Keith Dempster would round out the top five.

Other winners on the night included #25 Greg Belyea picking up his second win of the season in the Vanderlaan Building Supplies Late Models over second place finisher #5 Steve Baldwin who had his best finish of his rookie season. #11 Dan Ferguson returned to victory lane in the Bainer’s Radiator Canadian Modified division over point leader #19 Zeke Mckeown. Doug Anderson showed his muscle again in the Brighton Automotive Pro Stocks however #7 Todd MacDonald who only has a handful of races under his belt come home a strong second. #66 Mark Packer picked up the win in the Bill’s Johns Comp 4 division. It was his first feature in in what has been a hard luck season for the #66 team and their hard work has earned them the Campbellford Chrysler Driver of the Week honours. 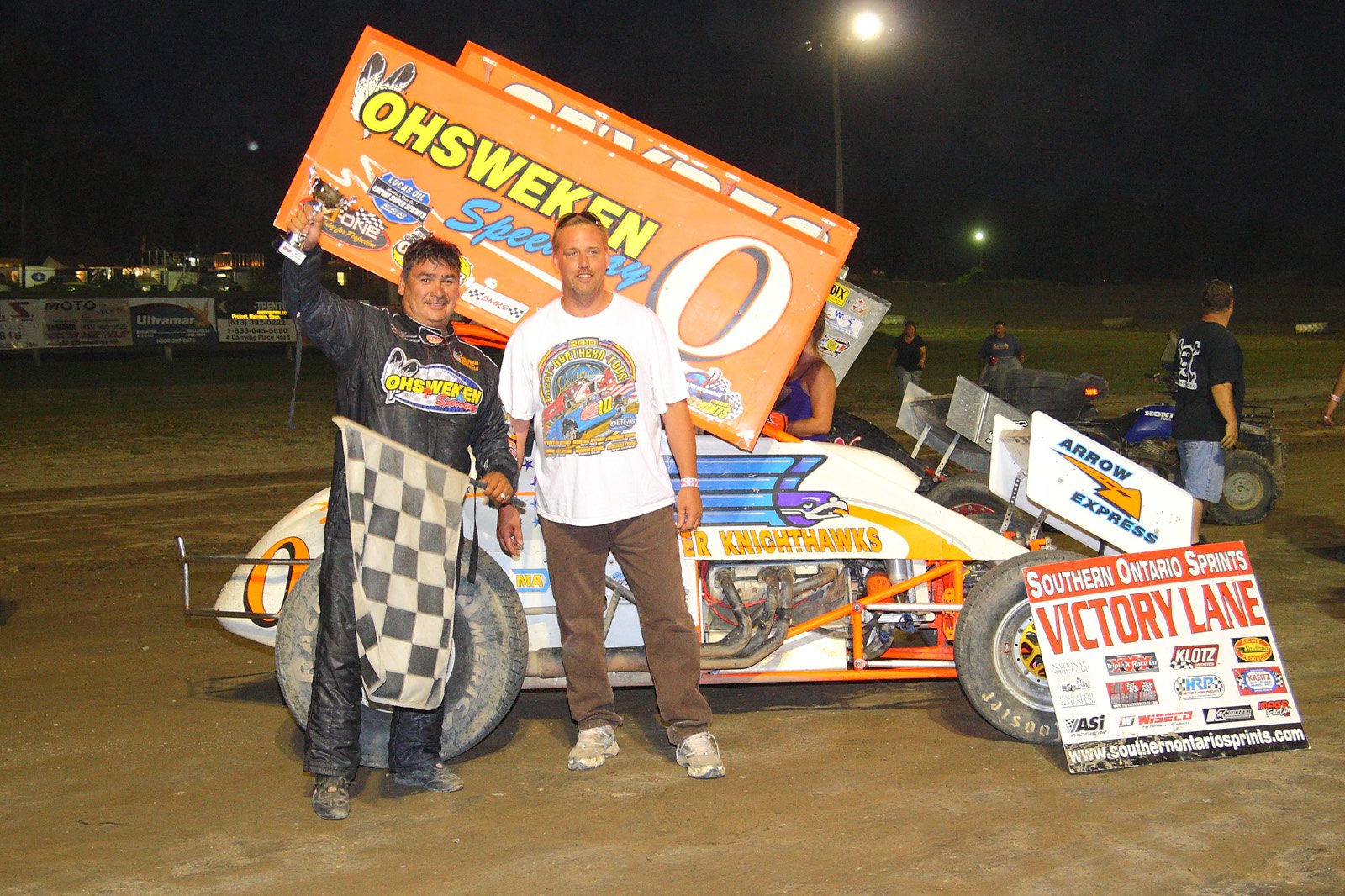 For the first ever Watson Building Supplies, Aaron Auto and Ultramar SOS Showdown, Glen “the Ohsweken Flyer” Styres takes the #0 to Victory Lane and the $2500.00 pay cheque at Brighton Speedway Saturday night.

This coming week Hotch’s Auto Parts presents a complete race program of Late Models, Canadian Modifieds, Pro Stocks and Stingers plus a 30 lap endurance race at the end of the night. The top five finishers in this week’s enduro will qualify for the 250 lap $10,000.00 to win monster enduro on August 26th adding some extra incentive to finish well. Gates open at 5:30 and racing starts 7 pm sharp. For complete details on this event or more visit www.brightonspeedway.com