RCR RACING: Cox enjoys his day at The Beach

DORCHESTER, ON – Jamie Cox and his Stubbs Communications / APC / Total Lubricants / London City Chrysler – Dodge Charger headed north for the Civic Holiday Weekend. Sauble Speedway in Sauble Beach was the destination for the APC Presents the ‘Beat the Heat’ 150 Open Late Model event, with some of the top drivers in Ontario on hand for the action. 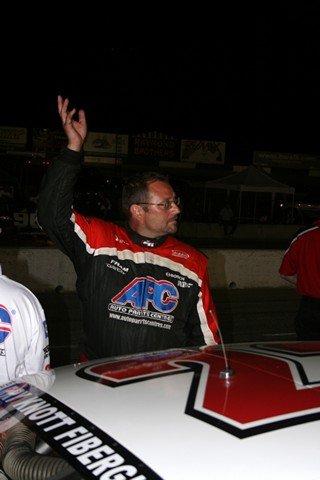 The night started with heat race competition and Cox was able to start fifth and bring home a fourth-place finish.

In the main event, Jamie rolled from the outside of row four, and was running seventh through the early portion of the event, as the field restarted after a lap 16 yellow flag. The field would go green again as Jamie settled into line, moving into the top five by the halfway break in the race when a mandatory yellow was flown to allow teams to change tires for the second half of the race.

The RCR Team jumped into action, adding a little fuel, making some adjustments to try and improve the handling of the car, and changing two tires.

The second half of the event would go yellow free, and towards the end of the race the car was a handful as the brakes faded and a few cars were able to pass him. Jamie would finish in sixth position on the race track, but rose to fourth as two cars had problems in tech lane. Jamie was pleased that they had finished, but puzzled by the performance. “We thought all day that we had a pretty decent car. We made a lot of adjustments to the car during the day, and somewhere we over-adjusted,” he said. “We also ran out of brakes which made it very tough to get into the corner. Looks like its back to the drawing board.”

Exactly one week later, the team was back in action at Flamboro Speedway for the final round of the Grisdale Triple Crown series at the Hamilton-area oval, after a Saturday night rain out moved the race until Sunday.

Cox finished fourth in the first heat, and brought home the checkers in his second qualifier. “We only had one practice, because it was still raining on Sunday morning, but we ran the fastest times we’ve ever run there in the heat races,” he said.

After racing his way into the top-five early, Cox got into Steve Laking, turning him around as both would restart at the back of the pack. Jamie climbed back up to seventh by lap 40, but was turned by Scott Lyons, ending up in the fence. The damage was significant enough to end the afternoon for the team. “We tore up some bodywork, and had a hole in the radiator, which was enough,” Cox said. “There was a positive from today. We were so far out of the points that we tried a different setup today, and it worked. The car was fast – we just got involved in a couple of incidents.” 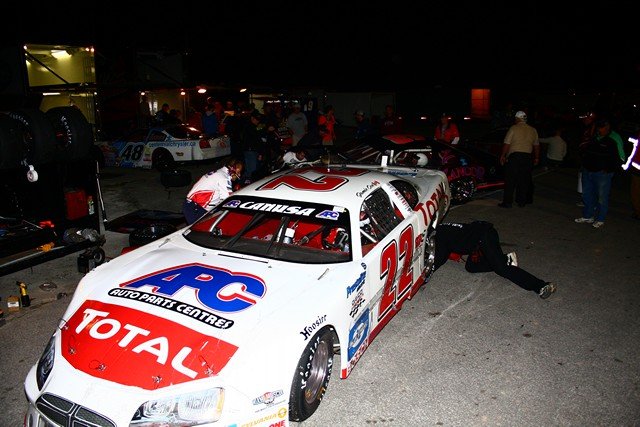 Watson won his second big feature in a row with a victory over Mike Bentley, with Jason Shaw joining them on the podium to round out the top three.

Release and photos from www.maudsleymotorsports.com

Matt Pritiko enjoys solid results in first half of 2012 season