GRAND BEND, ON – Eric Latino returned to the winner’s circle today, capturing the Pro Modified Racing Association event held as part of the IHRA MOPAR Nitro Jam Nationals at the Grand Bend Motorplex. The race was the fourth of seven on the 2012 PMRA tour. Latino’s win was his fourth in PMRA competition.

Driving his Team Green 1969 Chevy Camaro Pro Modified, Latino, of Whitby, ON, bested Rocky Di Lecce of Mississauga, ONn in the final round held on the Grand Bend quarter-mile strip. Latino qualified fourth in the event with a 6.057-second, 238.09-mph posting. Di Lecce qualified his 1968 Camaro third with a 6.005 run, just behind number two qualifier Jeff Roth of New Dundee, Ontario with a 6.004 in his Willys, while number one qualifier was Bruce Boland of Hamilton, ON, with a 5.979 posting in his Willys. 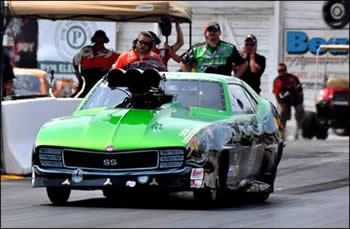 With his win, Latino has moved into second place in the Pro Modified Racing Association 2012 Championship Point Award Series presented by Global Emissions Systems, Inc. with 1049 points. Leading at present is three-time PMRA champion Boland with 1074 points. Boland also set the low elapsed time (5.979) and top speed (240.47) of the meet. Third in the series is Roth with 1033 points fourth is Grainy with 1016 points, and Di Lecce is fifth with 1014 points.

The next event is the South Coast Community Weekend August 3-5 at the Cayuga Dragway of Toronto Motorsports Park. The PMRA’s two companion series, the Quick 32 Sportsman Series presented by NAPA and the Pro Bike & Sled Series presented by Wiseco Performance Products will also compete at this event, offering a colorful and exciting package of drag racing action.

The Pro Modified Racing Association, www.PMRA.ca, competes with its two companion series, the Quick 32 Sportsman Series, www.Quick32.ca, and the Pro Bike & Sled Series, www.PBSS.ca, and travel and compete together throughout the racing season, offering an exciting and diverse package of drag racing action.