CHATHAM, ON – Shawn Jones kept telling everyone that his little brother was going to be ‘the one’ who breaks ‘the streak.’ And over the last couple of weeks, he said he wouldn’t be surprised if Trevor’s name was engraved on the Cory Schives memorial trophy. Both of Jones’ predictions came true when his 14-year-old brother pulled off a win for the ages on Saturday night at South Buxton Raceway.

Trevor Jones led the final 17 laps to win his first career feature race in the Tirecraft Comp 4s at South Buxton Raceway. And it wasn’t just any feature race, it was the memorial for a special friend of the Jones family. “To win my first feature, and have it be Cory’s race … it’s really special,” said the shy Jones.

Schives passed away three days after his 17th birthday in 2009 after a long battle with cancer. Cory worked on Shawn’s pit crew when he started racing in 2008, as the two were best friends growing up in Blenheim. Cory’s brother Jeff, who is now 17, works with the Jones’ race team today. “It’s great to keep it in the family, Cory and Jeff are like one of us,” Trevor said.

Shawn won the third memorial race last year after teammate Nate McNally won the first two. McNally, who doesn’t race any more, also works on the Jones’ race team. Going into Saturday’s action, Shawn Jones, with 17 wins, and DeSerrano with eight, combined to win every Comp 4 feature race since the start of the 2011 season. And the 20-year-old Jones had won the last five feature races going into Saturday’s action.

But a new feature winner was guaranteed early as DeSerrano didn’t even start because his car wouldn’t fire while the elder Jones exited three laps in after getting taken out – by little brother! “I felt really bad about it,” Trevor said. But Shawn was so excited for his brother’s success, he didn’t want, or need, an apology.

“He came in and apologized and I told him, ‘don’t apologize to me, you just won a race!’ ” Shawn exclaimed. Besides, Shawn knew the incident wasn’t his brother’s fault.

“(Rob) Quick drove over the front of my car and bent the tire rod,” Jones said of contact between turns three and four that got his car loose. “It ripped the wheel right out of my hand. I was trying to figure out what was wrong with the car and was already sideways when I knew someone was going to get into me. I didn’t even know it was Trevor until I got to the pits.”

Trevor said he had no chance of avoiding contact.

“I got hit too and was just getting back on the gas when I saw him and it was too late to get on the brakes,” he said of the crash that sent big brother to the pits for the night. On the restart, Jones won a three-wide battle as he threaded the needle between Quick on the bottom and Chatham’s Randy McKinlay on the outside to take the lead coming out of turn two.

And to prove that it was no fluke, Jones pulled off the same move on a restart two laps later, this time with Tilbury’s Ryan Beaulieu up top. Jones said he learned the move by watching his brother battle Quick while he was running third in last week’s feature.

“I saw the way he (Quick) pushed last week and as soon as he did, I saw the hole and just drove through it,” Jones said.

Jones was able to widen his lead as Quick had his hands full in a battle for second with McKinlay. When the checkered flag fell, Jones had about a 12-car length lead over Quick, who held off McKinlay for his third straight second-place finish. Blenheim’s Brett Hope and Ridgetown’s Jerry Ramaut rounded out the top five. Jones had five top-five finishes in his first 10 features, including finishing third the previous two weeks.

Ironically, Jones had to watch his brother win last year’s Schives memorial race from the grandstands as he was too young to go to the pits. He turned 14 on March 13, the minimum age to enter the pits and drive a race car. 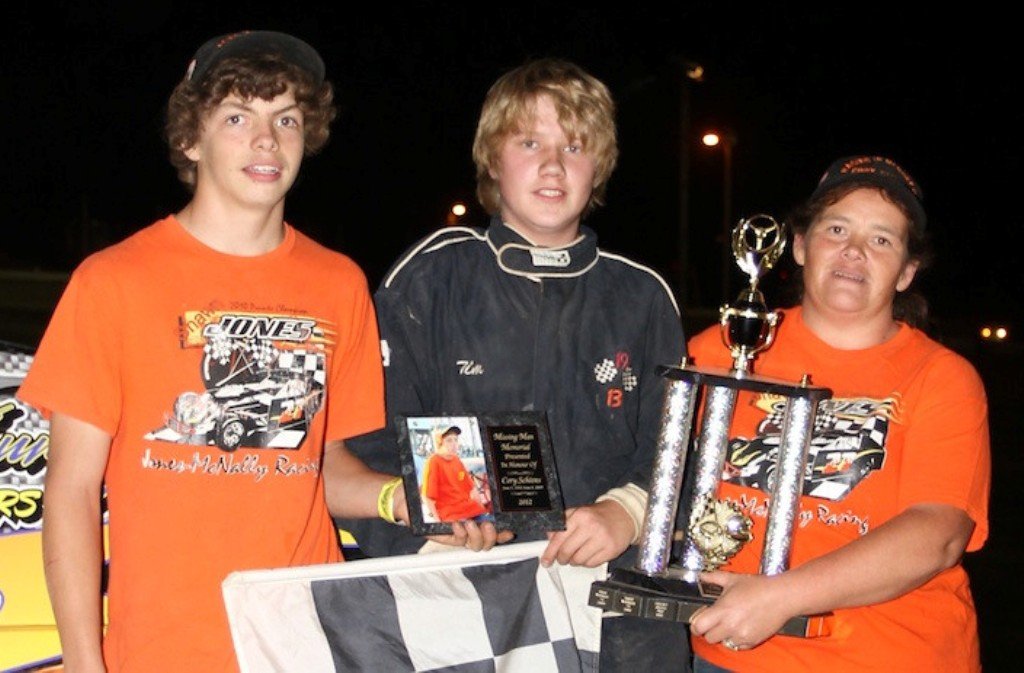 Dale Jr. held off an early challenge from Chatham’s Louis Clements and then Louisville’s Jim Fletcher in the later laps to win for the fifth time in the last seven weeks. He also won his heat and dash for this second sweep in three weeks. Fletcher finished second, followed by Chatham drivers Brian Speelman, Eric Vanderiviere and Darryl Hoekstra. Vanderiviere ran second for seven laps before taking the lead with eight to go when the leader Tyler Lozon, of Grande Pointe, got loose in turns three and four. Wallaceburg’s Willy Vyse finished second, followed by Wheatley’s Steve Clements, Merlin’s Steve Shaw and Lozon.

Meanwhile, Chris Ross intended to watch the races from the stands but after arriving at the track, decided to return to his home in nearby Charing Cross to get his race car. He wound up winning the Glencoe Auto Recyclers UMP Late Model feature by passing Chatham’s Jim Jones with under two laps to go. Rounding out the top five were Chatham’s Brent Colby, Wallaceburg’s Mike Lewis and Chatham’s Brad Authier, who had a four-feature win streak snapped.

Dain Naida, of Tecumseh, Mich., led all 25 laps to win the Can-Am wingless sprint feature, with Mark Casella, of Weirton, W. Va., second. A total of 14 cars from the Ontario Topless Sprints, Michigan Traditional Sprints and Buckeye Outlaws made the trip to South Buxton.