EDMONTON, AB – There is nothing like winning one for momma. With his 80-year-old mother watching from the sidelines and all of his family and friends cheering him on, Alberta native Tim Nemeth drove his beautiful 1977 Pontiac Firebird to a win in the AMSOIL Prostalgia Nitro Funny Car class and in the process ended Tim Boychuk’s three year reign at the IHRA Mopar Rocky Mountain Nitro Jam Nationals presented by Good Vibrations Motorsports all on championship Sunday at Castrol Raceway.

With Edmonton native Boychuk riding a three year winning streak at his home track in IHRA’s premier event, Nemeth (above) came out of nowhere and blasted to the No. 1 qualifying position and ran that momentum all the way to an IHRA Ironman, giving the man known better as the “Iceman” his first-ever Rocky Mountain Nationals win.

“This win is for my mom. She is 80 years old and she is here with us this weekend and I really couldn’t have done any of this without her,” an emotional Nemeth said. “Since we switched to the new chassis and body last year everything has really come together for us. We have found a window to work in and the car has really been responding well to the adjustments. To be honest she is just really fun to ride right now.” 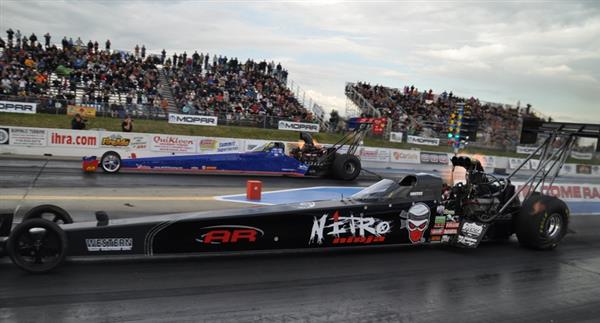 Joining Nemeth in the winner’s circle on Sunday was Bobby Lagana Jr. (above) in Top Fuel, Joey Steckler in Rocky Mountain Nostalgia Funny Car and Nathan Gagnon in Nitro Harley.

Nemeth’s remarkable weekend began with a track-record pass of 5.752 seconds at 231.91 miles per hour on Saturday to propel him to the top of the fan-favorite nostalgia Funny Car class. On Sunday Nemeth avoided the man of the weekend as final round opponent Cameron Ferre dispatched of Boychuk in the semifinals while Nemeth took care of Mike Halstead. Ferre, behind the wheel of the “Twig Zeigler” tribute ’74 Satellite, defeated the three-time Rocky Mountain Nationals champion on a holeshot with a 6.030 to a 6.004 to advance to the money round.

Following the win Nemeth was joined in the winner’s circle by his mother and crew in an emotional scene as she was helped to her feet and took hold of the Ironman, all with tears streaming down her face.

“We love coming to Edmonton. This is my home province and I always like to come home and do well for these fans,” Nemeth said. “We haven’t had much luck at this race in the past, but this year everything came together for us. What an unbelievable weekend and to share it with my mom, what more could you really ask for.” 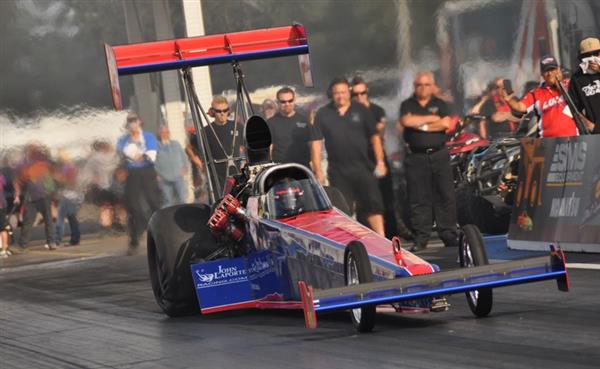 In IHRA’s other premier class Bobby Lagana Jr. swept Top Fuel with wins over Bruce Litton on Saturday and Ike Maier (above) on Sunday to give the Scarsdale, New York native his first weekend sweep since 2011. Lagana had a tremendous weekend in his first IHRA action of the year behind the wheel of the “Nitro Ninja” machine, defeating Kyle Wurtzel in round one before putting on a tremendous show in the final against Maier.

Lagana’s win was made even more special by the unique crew assembled especially for this weekend. The mish-mash crew consisted of his brother Dom, Nitro Harley riders Jay Turner and Mike Scott, Funny Car driver Mark Sanders’ son Jake Sanders and others all helping fill in while Lagana’s father recovers from a heart attack suffered earlier this year.

“All of these round wins are for dad. The poor guys is at home, but as hard as it is for him to be away right now he just needs to heal. This win is for him,” Lagana said. “We got this crazy crew together, Jay, Jake, Mike Scott, Tracy – they are a great group and we were glad to have them on board.

“This win is also for the fans. We love coming up here and we are really excited to get both wins here this weekend.”

In the consolation pairing Bruce Litton went two-for-two in round wins when he took the green light against a broken Kyle Wurtzel. Maier added a near-track speed record pass of 324 miles per hour Saturday night. 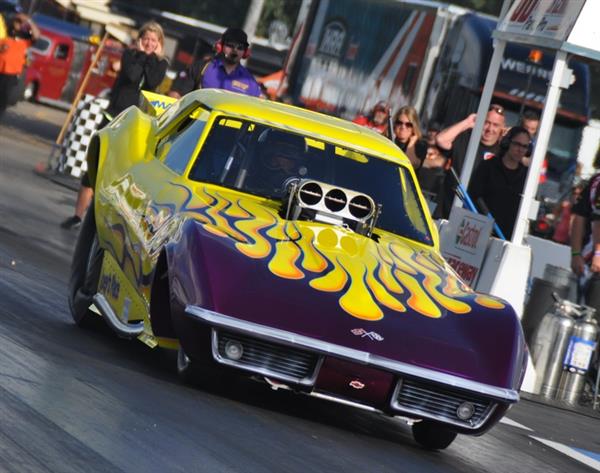 Sunday’s only winner to call Edmonton home was Joey Steckler (above) who won the Rocky Mountain Nostalgia Funny Car class during a wild weekend that included a number of upsets. Steckler eliminated two of the top five qualifiers – including top qualifier Cal Tebb – on his way to the final all after qualifying last on the charts.

“When we came in on Friday things just weren’t going our way. We forgot to fuel the car in our first pass and ran out of fuel and just never had any luck, but we really turned it around today,” Steckler said. “This is my second event that I have won in the last couple of years and it is just awesome. I can’t thank IHRA enough for coming up and putting on this race. It really gives a lot of credibility to our group and our track. It was a long day with all of the rain, but in the end it all came together.”

Nemeth had wins over top qualifier Cal Tebb and David Brant on his way to the final. 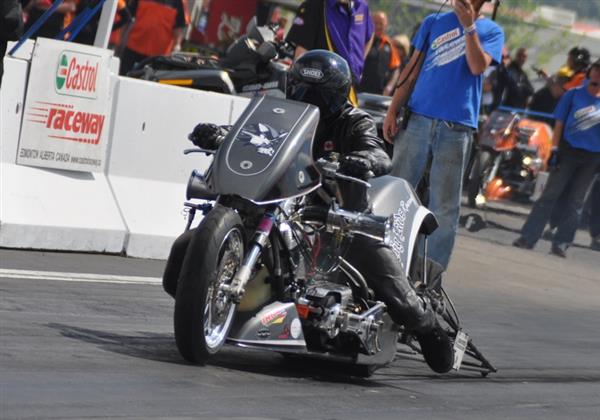 Wrapping up Sunday’s professional competition was Nitro Harley as Nathan Gagnon (above) of British Columbia drove to his first Rocky Mountain Nationals wins over Andy Beauchemin. From the No. 2 qualifying position Gagnon defeated Lyle Newton and Ben Ground on his way to the final, saving his best for last with a tremendous .0126 light and a 6.733, 207.94 in the final to defeat Beauchemin who had to get off of the throttle early. 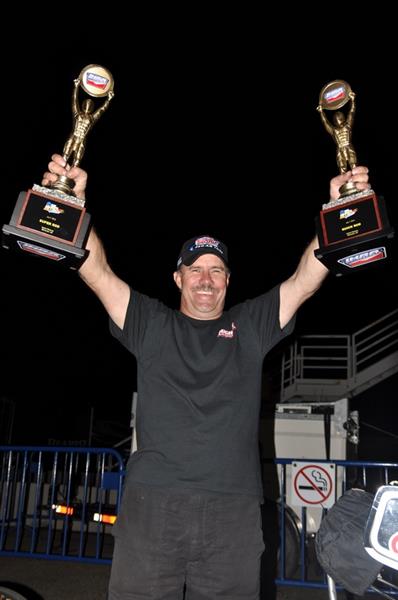 In sportsman competition Mike Shannon (above, Kelowna, British Columbia) highlighted Sunday’s winners with a double win in Quick Rod and Super Rod just a week after doing the same at an IHRA Division 6 race in British Columbia. Shannon recorded wins over Brian Malcolm and Tom Patterson to record his second double in two weeks. 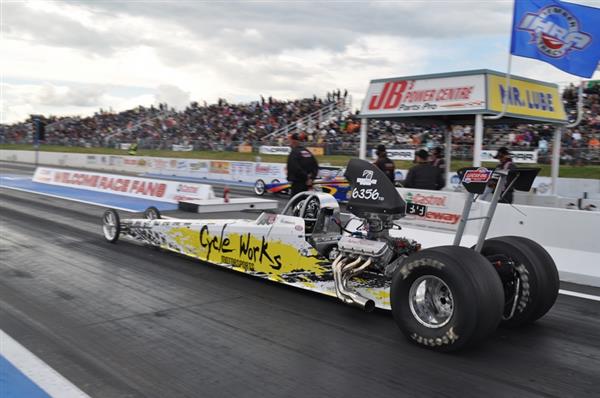 Edmonton’s native Jodi St. Arnaud (above) , in only her second ever drag race, recorded the win in IHRA’s quickest and fastest sportsman class, downing Scott Taylor in the final to give the young lady her first ever drag racing victory all at the biggest race of the year at Castrol Raceway.

In exhibition action Jason Rupert had a number of tremendous passes in the Synoil Alcohol Funny Car and Kyle Hough put himself in a position to take a win in Nostalgia Fuel Altered, but rain forced the cancellation of the finals of that class.

Next up for the IHRA Nitro Jam series is a stop at the Grand Bend Motorplex in Grand Bend, Ontario as the series continues its Canadian tour July 19-21.

Outlaws and Outlaw Midgets in action at ‘The Beach’