by Greg MacPherson
in Current Issue
0

Disappointed and frustrated that Kawartha Speedway sat virtually unused in 2013, former racer Andrew McFadden has leapt into the realm of motorsports promotions and has put together an eight date stock car schedule for the Fraserville, ON track.

‘The big pieces were still in place, it was a matter of organizing the background bits,” explained McFadden. “I spoke with the drivers, as well as (Peterborough Speedway owner) JP (Josiasse) and (former Kawartha Director) Derek Lynch to get some organizational advice and decided that putting together a racing program was something I could do.”

With the decision to go with the eight race dates, McFadden was unsure whether to proceed with the traditional Friday night slot or attempt Sunday afternoon events. Eventually, he decided to try both.

“No one could give me the definitive answer of which night was better,” said McFadden. “Some drivers like the option of running Friday nights to leave the weekend open, while others would rather race Sundays so that they don’t have to miss work to get to the track on Friday in time for practice. Ultimately, it will be the fans who decide when we run.” 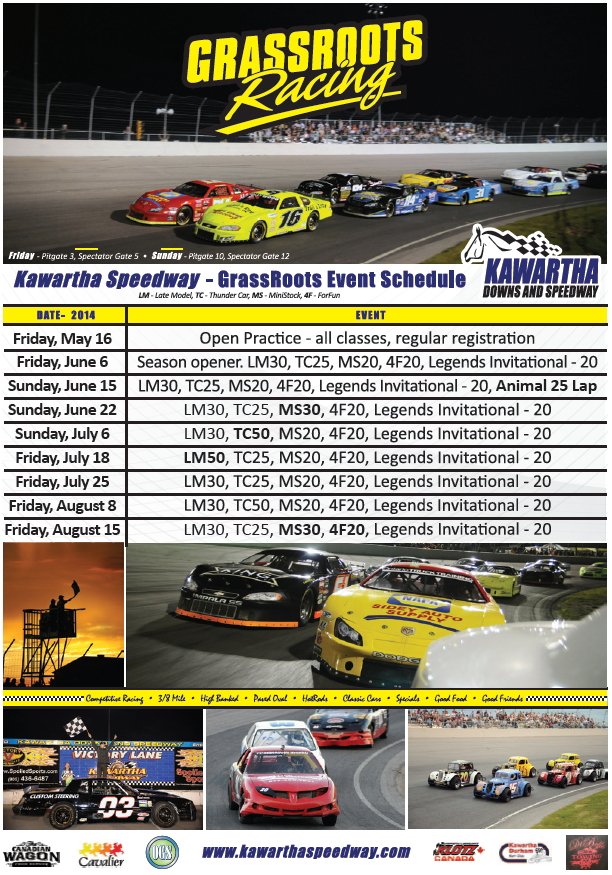 For the first season at the reborn Kawartha facility, McFadden has produced an ambitious calendar with competition each night featuring the Late Models, Thunder Cars, Mini Stock and Four Fun divisions, as well as a nightly Legends Invitational. Each class will be provided a trio of races per event, with twin heat dashes coupled with a feature contest.

“So far our numbers look really solid. The Four Funs are a little light, we may run them alongside of the Mini Stocks until their numbers build up.”

Father’s Day (June 15) will mark a deviation from the regular schedule as McFadden has created what he calls his ‘Kawartha’s Call of the Wild Animal Open Shootout.’

“This will be a ‘Run Whatcha’ Brung’ type of racing, open to virtually any type of safe race car. It’s something different for the fans, and I think it will appeal to a really wide range of racers. I have no idea exactly how many, or what kind of cars, we’ll have showing up.”

McFadden’s primary goal this year, and the reason he has dubbed this ‘Grass Roots Racing,’ is to keep the fun in the sport.

“I’ve always been told to never turn your hobby into a business or you’ll lose the passion. Grass Roots racing is where everybody started, back when all most of us had was passion. If we can keep the fun in it for the racers, and provide some decent entertainment for the fans. I think we’ll have accomplished our goals.”