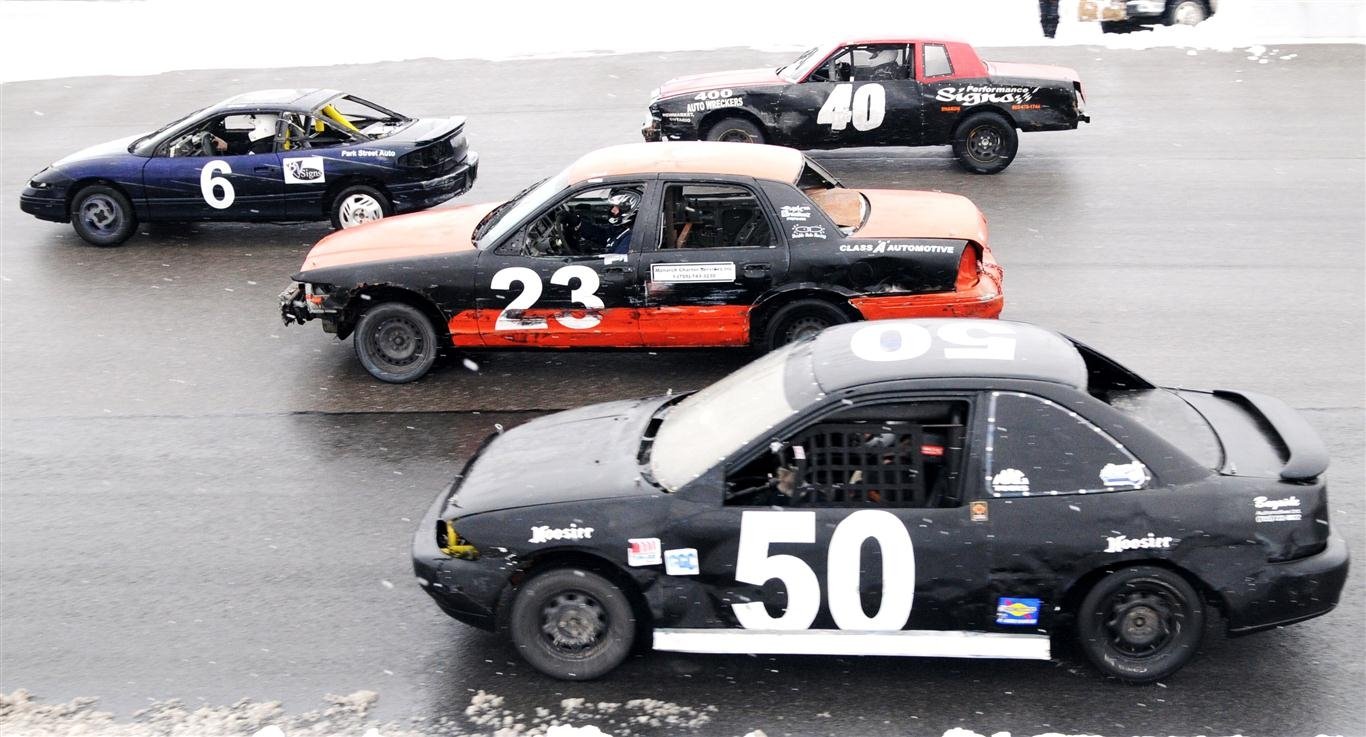 Love it or hate it, there’s no escaping a Canadian winter. You just have to make the best of it. Fans of battle at Kawartha Speedway have been longing for a taste of action since the 2011 season wrapped-up in September and Sunday, February 5th the 3/8th mile Fraserville, Ontario oval will throw its best at old man winter with the 3rd annual running of the Long John 200 Endurance event.

With categories for 4, 6 and 8 cylinder competition, the midday mid winter marathon is the perfect opportunity for loyal supporters to get their racing fix long before the return of the Friday night fights in June…and even a couple of weeks prior to the Daytona 500 starting the NASCAR Sprint Cup season Sunday, February 26th. Track General Manager/Promoter Derek Lynch says Kawartha Speedway is the perfect venue to host the cold weather epic.

“Unlike some facilities who stage a winter event, we’re fortunate enough to have an enclosed grandstand to keep the spectators out of the elements,” said Lynch. “Even still, there are a few hearty souls who just couldn’t bear to come to watch a race at Kawartha without being close to the action and will chose to brave the conditions and sit or stand outside. Either way, we’ll make sure there’s plenty of coffee, hot chocolate and warm food to kill the chill.”

The first car across the line in the combined 4 and 6 cylinder class will receive $300.00, with the same payday waiting for the 8 cylinder winner. Second and third place in each grouping pays $200.00 and $100.00 respectively. No matter what the division, the overall winner pockets a $300.00 bonus. There is a $25.00 entry fee for each participant. Full rules and information can be found on the track web-site. Even though this is the 3rd edition of the race, Derek Lynch confesses that he and his team are constantly tinkering with the format to find the perfect formula.

“Every time we open the gates, the goal is to give the fans the best possible show and the Long John 200 is no exception,” according to Lynch. “We’re always looking for a solid car count and strong support from the crowd. There’s no telling what will happen until the green flag drops, but we’re all looking forward to an amazing day.”

Pit gates and registration opens Sunday, February 5th at 11:00, with a warm-up session scheduled for noon and racing at 1:00. Spectator admission is just $5.00.

Kawartha klips: Kawartha Speedway will be part of the Canadian Motorsports Expo – presented by Inside Track Motorsport News – February 10th, 11th and 12th at the International Centre in Toronto. See www.CanadianMotorsportsExpo.com for details…Be sure to check www.kawarthaspeedway.com for the latest off-season news and updates on the complete 2012 schedule.