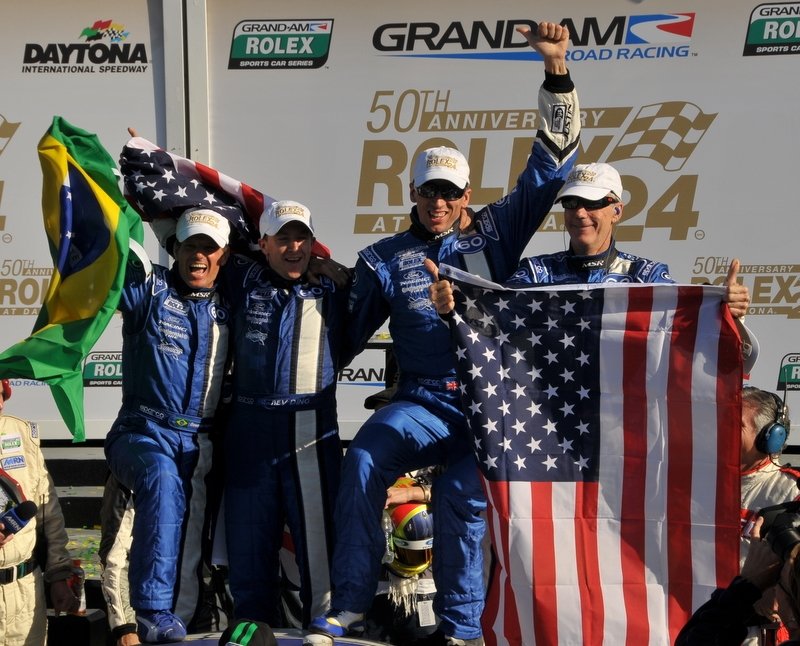 In his ninth try at winning North America’s most prestigious sports car race, team owner Michael Shank put his faith in a stock car driver. And that driver – A.J. Allmendinger – put in three grueling hours at the wheel of the No. 60 Michael Shank Racing with Curb-Agajanian Ford/Riley Daytona Prototype to win the 50th Anniversary Rolex 24 at Daytona.

Allmendinger, who recently signed to drive for legendary owner Roger Penske in the NASCAR Sprint Car Series and was in his seventh run in the 24 with Shank, outran second-place Ryan Dalziel in the No. 8 Starworks Motorsport Ford /Riley.

First-timer Felipe Nasr, the young Brazilian who until last December’s test at Daytona had never driven a DP, finished third in the second Shank car, the No. 6 Ford/Riley. Nasr secured the ride by virtue of winning the Sunoco Rolex 24 at Daytona Challenge championship for competitors in five European series.

Allmendinger shared the winning ride with Ozz Negri, John Pew and Justin Wilson. And while the final time sheet shows a winning margin of 5.198 seconds, Allmendinger’s closing stint was not without drama. He rubbed fenders with veteran sports car racer Allan McNish in the No. 8 Ford and later had to go 20 feet wide in turn one to avoid a GT car as the laps wound down.

Celebrating in Victory Lane he admitted the strain of the final run. “I’m so worn out,” he said. “We wanted to win this for Shank. The motor was so fast. I am so drained.