Jeff May and Josh Sliter led the TUSA Mod Lites to the green flag for their 20 lap feature event with Sliter taking the lead. Derek Wagner took over the lead coming off turn four to complete the opening lap. Dean Pronovost spun in turn three to bring out the races first caution on lap two. Jamie Gilbert would take over the lead off the restart green as Wagner would challenge to regain the lead. Paul Klager would work his way into third place. Wagner would challenge Gilbert but Gilbert was able to hold him off and score the win.

Gary Lindberg and Matt Sharpe led the PC Works DIRTcar Sportsman to the double green flags for their main event with Lindberg showing the way over Cody McPherson. Jeff Armstrong would pass Sharpe to move into third place. Brad Rouse would work to the outside to move into the top five. Adam Leslie would pass Armstrong to take over third place and Rouse would move into fourth. The leaders would hit lap traffic on lap 10.

While working lap traffic, Lindberg and Darrell Farraway made contact and both would spin in turn three to bring out the caution. Lindberg would start at the rear of the field for the restart as Farraway was sent to the pits for the contact. With Lindberg going to the back of the field, that would put McPherson being scored as the leader with Adam Leslie and Brad Rouse in the top three.

The restart would see McPherson and Rouse go at it for the lead and Rouse would take full advantage of his opportunity as he went to the outside and passed McPherson for the lead on lap 21, after McPherson suffered a flat right rear tire, which brought out the caution. The last four laps would see Rouse pull away from Leslie and would drive on to win in back to back weeks, bringing up his feature win count to five on the season at Humberstone. 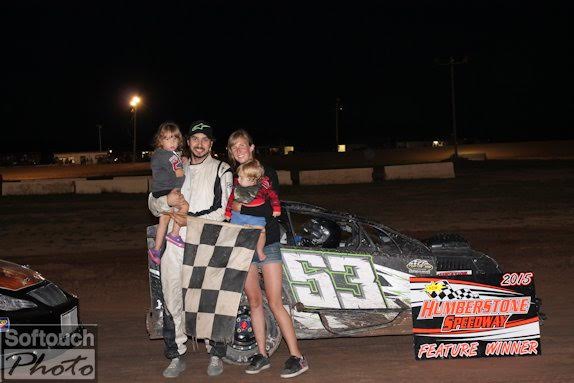 Dennis Lunger Jr and Jeff Dayman shared the front row for the Pinty’s RUSH Late Models feature event and it was Lunger jumping out into the lead. Rob Pietz would battle Dayman and move into second at the end of the first scored lap, Doug Gavette would pass Colton Ledingham to move into fourth place. Lunger would open up his advantage over Pietz with Dayman running in third. Gavette would spin in turn four and Ledingham would make contact with Gavette, causing the caution to come out on lap 17, erasing Lunger’s lead over Pietz. The three lap shootout would see Lunger pull away from the rest of the field as he would score his tenth win of the season.

Bill Bleich Jr led early on in the feature event for the JC Auto Street Stocks. Jim Lampman battled Bryce Richardson for second for several circuits and would move into the second position before the halfway point. The leaders would hit lap traffic on lap 11 as Lampman and Chris Crawford tried to reel in the leader Bleich. After a caution on lap 13 for a spin by Mickey Bridges in turn four, Bleich and Lampman shared the front row with Crawford, Jason Fontaine and Richardson racing inside the top five. Lampman battled Bleich for the lead as Fontaine passed Crawford for third. Bleich would score the win,

Teeple and Tyler Lafantaisie led the Cosco Haulage Mini Stocks for their feature and it was Lafantaisie showing the way. Lafantaisie would open up the lead as Teeple, Rob Goulding and Iudiciani raced hard for several circuits for the third spot with all three drivers having the third position at one time or another during the main event. Lafantaisie would drive on to score his first feature win of the season.

Frank Perry and Dylan Llord led the Mike Knapp Ford Pro 4 Trucks to the green flag for their 15 lap feature event with Llord showing the way. Danny Wurster charged through the field to pick up the second position with Adam Nicholls and Mike Toovey raced in the top four throughout the feature distance. Llord would be stout throughout the night and would hold off Wurster to pick up his first career feature win.

Verge Insurance will present the rescheduled appearance by the Go Nuclear Late Model Tour. A full card will also be on the program. Gates will open up at 4:30pm with racing getting underway at 6:30pm sharp In just two weeks will be the anticipated return of the Mighty Modifieds to the speedway for the Pete Cosco Memorial..

The New Humberstone Speedway is located just two miles East of Port Colborne on Highway 3, just 17 miles west of the US/Canadian Border at the Peace Bridge (Buffalo/Fort Erie). For more information, please visit us on the World Wide Web at www.humberstonespeedway.com as well as follow us on Twitter @NewHumberstone and like us on Facebook. Don’t forget to bring your portable FM radios and listen to all the action on 90.3FM. You can also call the speedway at (905) 834-4002 or the speedway office at Cosco Haulage (905) 935-2886