Olivier Bédard has clinched his fourth and fifth wins of the season.

@MicraCup • @nissancanada • ST-EUSTACHE, QC – This past Saturday at the Autodrome St-Eustache track, the Nissan Cup Grand Prix consisted of two spectacular Nissan Micra Cup races. Both rounds were won by Quebec driver Olivier Bédard, who now has sole ownership of the number one spot in the championship standings.

Free practice and qualifying were condensed into one day, and the two races did not allow the drivers nor their teams any rest on Saturday, but delighted the spectators that packed the stands to watch this event at Autodrome St-Eustache.

Starting with the free practice, the drivers pushed their Nissan Micras to the limit in the intense summer heat, once again proving the first-rate reliability of the 25 entered Micras. The mechanically stock Nissan Micra race cars concluded the season’s ninth and tenth rounds on St-Eustache’s 1.9 kilometre track without any issue.

Having made his series debut two weeks ago at the Grand Prix de Trois-Rivières, Antoine Bessette earned himself the pole position during a qualifying session that had the top drivers swapping fastest times on multiple occasions. Olivier Bédard finished second, ahead of Valérie Limoges, Jacques Bélanger, Stefan Rzadzinski and Marc-Antoine Demers.

The start of the first race saw Antoine Bessette execute a perfect launch, but as of the second lap, Olivier Bédard had made his way to the front of the pack, on the path to victory. Bessette finished second, ahead of Valérie Limoges, Kevin King, Jacques Bélanger, Jean-Michel Isabelle, Marc-Antoine Demers and Nissan GT Academy driver, Thanaroj Thanasitnitikate. Thanaroj’s teammate, Abhinay Bikkani, wasn’t as lucky and had to retire following a collision, which then eliminated him from the hunt for the title. It was one of the few unfortunate incidents in the race and despite the intensity on the track, a very friendly spirit dominated the Autodrome St-Eustache paddocks. 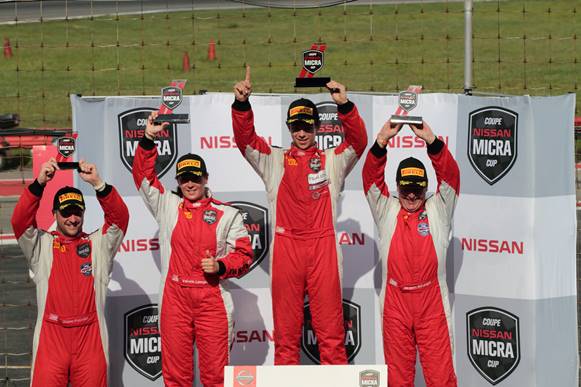 From left-to-right: Olivier Pelletier (first rookie), Valérie Limoges, Olivier Bédard and Jacques Bélanger, on the podium for the second race.

The second race presented a very similar scenario to the first, at least during the first few laps. Once Bessette retired, Bédard was expected to claim a second victory without any problems, however, this was not taking into consideration Valérie Limoges’ fantastic race. Among the front of the pack throughout the entire race, Valérie caught up to Bédard and challenged for the win right up until the final meters. Finishing in spectacular fashion, the two drivers were only separated by four tenths of a second when they crossed the finish line. With this result, Valérie Limoges earned the best result ever recorded by a female driver in the Nissan Micra Cup.

After this action-packed day, where the drivers once again captivated the crowd with their identical and essentially stock Nissan Micras, only two drivers – Olivier Bédard and Thanaroj Thanasitnitikate – can still fight for the championship title.

The next Nissan Micra Cup race weekend will take place September 25, 26, and 27 at Circuit Mont-Tremblant. These two races will mark the conclusion of the Nissan Micra Cup’s inaugural season, and crown the series’ champions.

For more information on the Nissan Micra Cup, please go to the website nissan.ca/micracup. Don’t miss series news and updates on the Coupe Nissan Micra Cup Facebook page and live tweets/results during practice, qualifying, and races on Twitter: @micracup

For all the latest Micra Cup News and photos, visit: http://nissannews.com/en-CA/nissan/canada/channels/ca-canada-2015-nissan-micra-cup

About the Nissan Micra Cup: Sanctioned by Auto Sport Québec (ASQ) and presented by JD Promotion & Compétition with the support of Nissan Canada, the Nissan Micra Cup exclusively features the stock Micra 1.6 S M/T model with minor modifications, including NISMO suspension – to render it race-ready.

Unlike most motorsport events, each competing Nissan Micra race vehicle will have the exact same specifications, resulting in a competition that truly reveals the most skilled drivers. The Nissan Micra Cup race vehicles remain equipped with the Nissan Micra’s stock 1.6-litre DOHC 4-cylinder engine with dual fuel injection and Twin CVTC (Continuously Variable Timing Control) and stock 5-speed manual transmission. More than 25 Nissan Micras will compete on each race weekend which will include two hours of track time consisting of: a 30-minute trial, a 30-minute qualifying session and two 30-minute races.

Young karting drivers, the average Canadian looking for an entry point into motorsport competition, or anyone who wants to experience the rush of adrenaline inherent with racing cars are all well-suited to this series. In summary, the Nissan Micra Cup is for people who are passionate about motorsports, want to experience all the fun and thrills of racing, but without spending staggering amounts of money.

About the Nissan Micra: In 2014, the Nissan Micra returned to Canada after 23 years as an all-new model, offering Canadians unbeatable value with the lowest starting Manufacturer’s Suggested Retail Price (MSRP) in Canada at $9,998. One item that sets the 2015 Micra apart is its agility. Micra is easy to drive and park, thanks to excellent all-round visibility and turning radius, electric power steering and a power to weight ratio that surprises. Powering the front-wheel drive Micra is a DOHC 1.6-litre 4-cylinder engine rated at 109 horsepower @ 6,000 rpm and 107 lb-ft. of torque @ 4,400 rpm.

About Nissan Motor Co.: Nissan Motor Co., Ltd., Japan’s second-largest automotive company, is headquartered in Yokohama, Japan, and is part of the Renault-Nissan Alliance. Operating with more than 244,500 employees globally, Nissan sold almost 5.2 million vehicles and generated revenue of 10.5 trillion yen (USD 105 billion) in fiscal 2013. Nissan delivers a comprehensive range of more than 60 models under the Nissan, Infiniti and Datsun brands. In 2010, Nissan introduced the Nissan LEAF, and continues to lead in zero-emission mobility. The LEAF, the first mass-market, pure-electric vehicle launched globally, is now the best-selling EV in history with almost 50% share of the zero-emission vehicle segment. For more information on our products, services and commitment to sustainable mobility, visit our website at http://www.nissan-global.com/EN/.

About Nissan Canada Inc.: Nissan Canada Inc. (NCI) is the Canadian sales, marketing and distribution subsidiary of Nissan Motor Limited and Nissan North America, Inc. With offices in Vancouver (BC), Mississauga (ON), and Kirkland (QC), NCI directly employs 250 full-time staff. There are 187 independent Nissan dealerships, 38 Infiniti retailers and 45 Nissan Commercial Vehicle dealers across Canada. A pioneer in zero emission mobility, Nissan made history with the introduction of the Nissan LEAF, the first affordable, mass-market, pure-electric vehicle and winner of numerous international accolades including the prestigious 2011 European Car of the Year and World Car of the Year awards.

More information about Nissan in Canada and the complete line of Nissan and Infiniti vehicles can be found online at www.nissan.ca and www.infiniti.ca.