In the September 27th edition of Spencer Lewis’ Short Track Notebook, we examine the latest news and notes heading into Sunset Speedway’s crown-jewel ‘Velocity 250’ event. The entries have poured in in the final days before the gates are scheduled to open, and we’ll bring you up on exactly who will be in competition on September 28th & 29th across a multitude of divisions.

When the OSCAAR Modified Tour takes to the track this weekend, the field will have a very ‘northern’ feel to it. A pair of Laird Int’l Raceway competitors have announced they will make the 8+ hour trip from Sault Ste. Marie to Innisfil, for their first career Modified appearances at Sunset. For Justin Jones (below), the event will mark his second time competing in Southern Ontario this month, after he competed in Night 1 of the Rick Woolner Memorial at Varney Speedway Motorplex on September 14th. OSCAAR veteran Jeff Dunford has confirmed he will return to the Terry Snyder-owned 7T entry, after leaving the team at the conclusion of the 2012 season. Dunford, of Callander, ON, will fill the seat vacated by Rookie of the Year contender Sean Cronan several weeks ago. The team has struggled all season long, and will look to Dunford to secure a pair of strong finishes to close out the 2013 campaign. Sponsorship for Dunford’s return courtesy of Tyler Dunford Chiropractic, Peacock Signs, Junior’s Tires of North Bay and Clover Auto. OSCAAR Super Late Model point leader Brandon Watson (above) will have a new look to his car when it rolls off the hauler Saturday morning. Knightworks Designs have sent along a sneak peek at Brandon’s new look, that will carry him through Sunset’s Velocity 250 weekend and into Peterborough’s Autumn Colours Classic on October 11th, 12th and 13th. The Stayner, ON driver will enter this weekend 40-points ahead of Andrew Gresel in the battle for the 2013 tour championship. Fans can follow Watson on Twitter all weekend @BrandonWatson15

Sunset Speedway regular ‘The Instant Classic’ Andy Kamrath (above, by Thompson Photography) recently took the time to offer up his preview of the 2013 Velocity 250. The Holland Landing, ON driver will once again campaign the Streamline Race Products house car, as his Shaun McWhirter-led squad search for their first career Crown Jewel victory. Kamrath will enjoy marketing support from All Star’s Ribs & Wings, Streamline Race Products, Duraflo Roof Vents, AM Roofing, CB Services of Bolton, Brandon’s Landscaping, GTA Racing and ImageWraps.ca. You can access Kamrath’s preview by clicking here. Former Delaware Speedway Pro Late Model regular Mat Box also discussed his Velocity 250 plans with our cameras recently. The Milton, ON driver has acquired a McColl Racing Enterprises chassis from Thane Woodside (above, by Thompson Photography), with plans to compete for the 2014 Sunset Speedway Ltd. Late Model championship. Box will make his divisional debut during the Velocity 250 weekend. The event will be a homecoming of sorts for Box, who began his stock car career at Sunset in the entry level Four Fun & Mini Stock divisions, before progressing to Delaware’s Pro Late Model class. His video preview can be found here.

Longtime Late Model competitor and team owner Roger Lajeunesse has announced a return to active competition, beginning with the Velocity 250. The former ALSTAR Super Series regular has purchased a chassis from veteran Steve Laking and, like Box, plans to race for the 2014 Sunset championship. Lajeunesse will hand crew chief duties for the weekend to son Jamie Sutton, who has worked with Sunset regular Sean Grosman for the past 2 seasons. Sponsorship for Roger’s return courtesy of Paragon Office Installation, Secondary National Moving and Linda Rodie iPro Realty. Off the strength of 7 feature victories at Barrie Speedway this season, sophomore Ltd. Late Model sensation ‘The Hillsdale Hurricane’ Thayne Hallyburton (above, by Dan Craik) has filed entry for the 2013 Velocity 250. Hallyburton will join fellow Barrie regulars Gord Shepherd and Al Inglis on the entry list, as they prepare to grapple with Sunset’s elite, including 2013 Sunset titlist Mike ‘Lights Out’ Bentley, 30-time champion Stompin’ Tom Walters and 2013 Garry Reynolds Memorial winner ‘The Bully’ Dwayne Baker. Hallyburton will enter his Hillsdale Service Center-sponsored ride this weekend, in search of his first career victory outside of Barrie Speedway. 30-time champion Stompin’ Tom Walters (above, by Dan Craik) will find himself at a slight disadvantage come feature day at the 2013 Velocity. The Bradford, ON driver will be forced to miss Saturday’s qualifying session, in order to take part in the 2013 Canadian Motorsports Hall of Fame Induction ceremony. Walters will join fellow Canadian legends Ron Fellows and Jimmy Carr in the class of 2013. His absence on Saturday will enter the 2012 Sunset champion directly into the B Main on Sunday morning, where the veteran will have to race his way in, should he wish to procure a starting spot in the 75-lap A Main Sunday afternoon. 2013 NASCAR Canadian Tire Series champion Scott Steckly has been forced to bow out of this weekend’s Velocity 250 event. The Millgrove, ON driver has been sidelined with a previous engagement, and will instead hand the driving duties of the Tim Schreinhert-owned #88 (above) to Steve Laking for the 2-day show. Sponsorship for Laking’s entry provided by DJ’s Furniture, The Murray Group, Spira Fire Protection, Revolution Race Products, Butchart Automotive & Transmission, Botanical Designs & Installations, Next Generation Forest Products and Varney Speedway Motorplex A bevy of strong contenders have filed late-week entries for the 50-lap Super Stock portion of this weekend’s event. After a big-stage victory during the Garry Reynolds Memorial at Barrie Speedway on September 22nd, Travis Hallyburton has confirmed he will be in competition. Hallyburton (above, by Dan Craik) joins a trio of Sauble regulars, as 2012 Autumn Colours Classic champion Smokin’ Joe Adams, Ron Lawrence (below) and Jason Legge will all make the long haul to Sunset, in search of unseating current track champion Randy ‘The Rocket’ Rusnell. 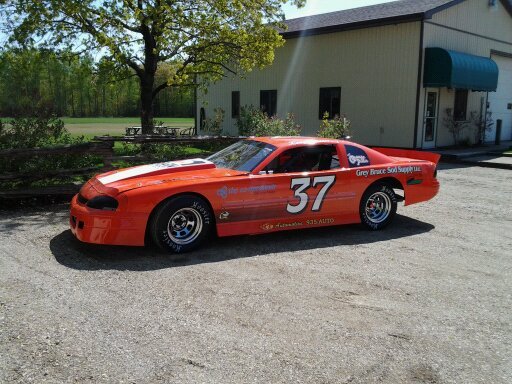