GRAND BEND, Ontario (July 12, 2013) – The 2013 IHRA Nitro Jam series returns to the Grand Bend Motorplex in Grand Bend, Ontario July 19-21 for the Mopar Nitro Jam Nationals presented by Parts Canada. This exciting 1/4 mile competition is one of the biggest drag races in Canada and will feature racing in several different classes with professional and sportsman racing taking place all three days.

This four-car exhibition featuring the cars of Pete Berner, Bob Bertsch, John Konigshofer and Toni Pontieri will mark the first time Mountain Motor Pro Stock cars have competed at an IHRA event since 2009 and one of the few times in the past four years they will run the full drag racing distance of a quarter-mile.

The event will also feature competition within the Pro Modified Racing Association pairing the two classes the IHRA invented together for the first time since the 2009 season. 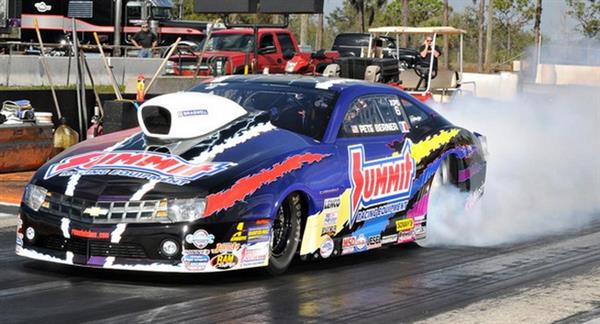 “The secret is out, we’re going back to IHRA,” said Berner, a two-time IHRA Pro Stock World Champion. “I’m really looking forward to racing again at what used to be the home for Mountain Motor Pro Stock. This four car, Chicago-style shootout is sponsored by Summit Racing Equipment and I want to thank Jim [Greenleaf] as well as Scooter [Peaco] for their efforts in making this a reality. I know that Pro Stock is a favorite class of many drag racing fans and I hope they are as glad to see us back at IHRA as we are to be back.

“The last time we ran quarter-mile we set the World Record. With the car and power we have now, we’ve surpassed our eighth-mile time on that record setting run, so depending on the conditions, we might have the opportunity to reset it again.”

The Pro Stock showdown will be a welcomed addition to the event as the four drivers join the stars of the PMRA series headlined by 2012 Mopar Nitro Jam Nationals winner Eric Latino. The eight-car qualified field is always an exciting addition to the Grand Bend weekend. 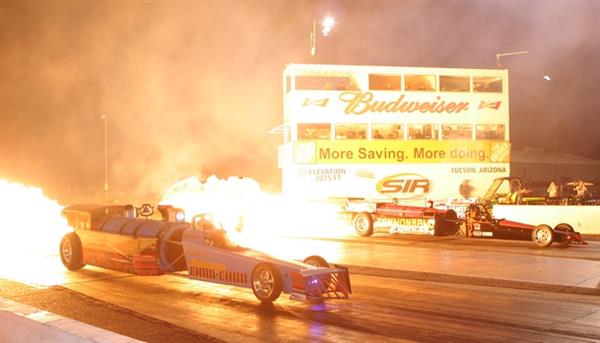 This year’s Mopar Nitro Jam Nationals will be run in conjunction with the Grand Bend Motorplex’s Jet Jam as three different jet-powered classes will join a jam-packed lineup of 16 nitro cars plus Pro Stock and Pro Mod in one of the biggest events in the 14 year history of the IHRA’s annual Ontario event.

The three jet classes will include the 30,000 horsepower “Super Shockwave” jet-powered ’57 Chevy, the Battle of the Jet Trains between the “Chattanooga Choo-Choo” and “Cannonball Express” and two of the fastest jet Funny Cars in the world. All of the jet-powered vehicles will light up the night sky with an impressive fire show and earth-shaking launches and will conclude with the IHRA’s famous Wall of Fire and pyrotechnics show. 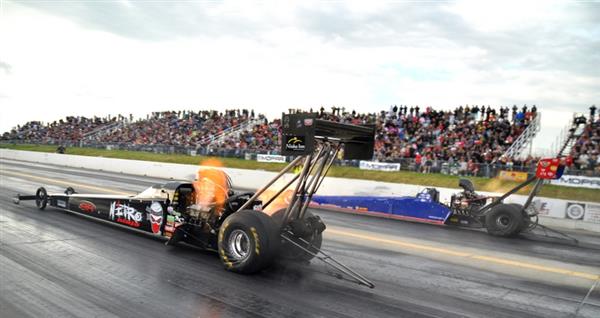 Following a weekend sweep at the Mopar Rocky Mountain Nitro Jam Nationals earlier this month across the continent at Castrol Raceway in Edmonton, Bobby Lagana Jr. will be looking to add a third and possible fourth win in a row in IHRA competition as he looks to repeat at Grand Bend.

The driver of the “Nitro Ninja” 8,000 horsepower nitro rail blasted to a huge win at last year’s Mopar Nitro Jam Nationals over longtime rival Bruce Litton and added the fastest pass of the weekend – 320.81 miles per hour – to his lengthy Grand Bend resume.

This year Lagana will have his toughest completion yet as Litton, Kyle Wurtzel and Canadian heavy hitter Ike Maier join the show. Maier came up just short of setting the Castrol Raceway track record two weeks ago at 324.75 miles per hour, covering the quarter-mile in 4.99 seconds, as he looks to do battle with the trio of American drivers and bring home a win for his home country. 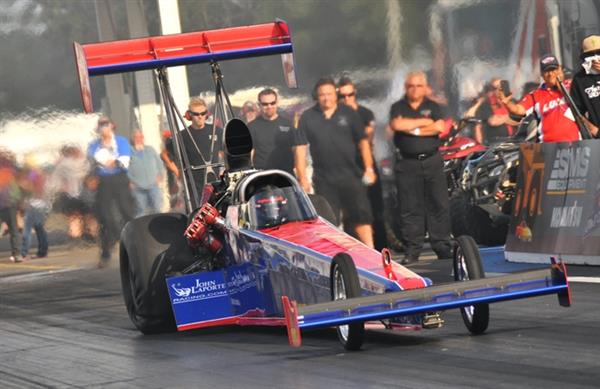 “This is one we really want to do well at. The car was great in Edmonton and we hope to continue that momentum at Grand Bend, a track that is known to hold some great speeds,” Maier said. “There is no reason to think we can’t put down some awesome numbers and challenge those guys for a win or two.”

Top Fuel will compete all three nights at Grand Bend with winners crowned Saturday and Sunday.

NEW LOOK FOR AN OLD FAVOURITE 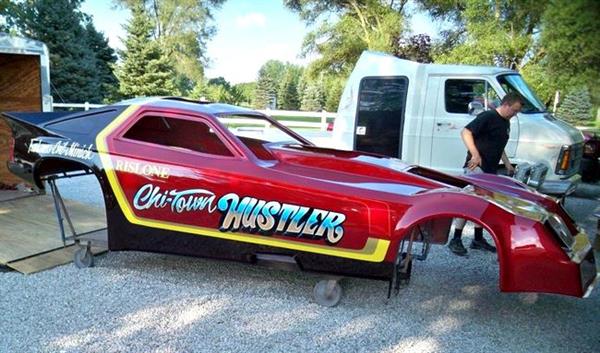 For years the famous “Chi-Town Hustler” nostalgia Nitro Funny Car has been easily identifiable by its silver and red design and Dodge Charger body.

But in Grand Bend the legendary machine, which has been wowing crowds around the world since the 1970s, will be sporting a brand new Monza body as the team looks to lose a few pounds and push the car to new levels of performance against a stout field of Funny Cars in western Ontario.

Gallen won one of the two races held last season at Grand Bend and paced the field with a weekend-best pass of 5.743 seconds at 247.57 miles per hour.

This year’s event will also mark the first time racer Rick Krafft has been back to the Motorplex since his injury at the track two years ago. Krafft’s legs were severely injured when the transmission broke in his nostalgia flopper sending the Indiana native into a long recovery. He returned to IHRA action in June for the first time piloting the “Bullet Bob” funny car in Pittsburgh and will be back behind the wheel in Grand Bend. 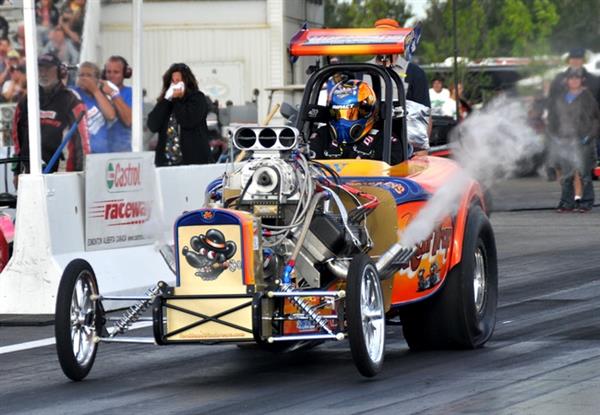 It’s not about the wins or the trophies for some racers, it is about the show.

But don’t let that fool you into thinking that winning doesn’t matter.

After three years of competition with the IHRA the legendary Ron Hope and his world famous “Rat Trap” Nostalgia Fuel Altered had put on show after show to the delight of hundreds of thousands of fans, but Hope had never tasted victory. Victories were instead reserved for some of the more modern Fuel Altereds in competition today, reducing Hope and his truly nostalgic – and truly tiny – Fuel Altered to the exhibition card.

But in Grand Bend everything changed.

Hope earned his first career IHRA Ironman on Saturday at last year’s Mopar Nitro Jam Nationals and then followed that up with another win on Sunday giving the oldest and most famous nitro machine on the property a weekend sweep at one of the biggest races of the year.

“That weekend was more than exciting. It is hard to find the words to describe what it meant to this team,” Hope said. “It was David versus Goliath both days last year. Some could say that sometimes you just get lucky and that is probably true, but the Ironman doesn’t say a word about that. It just says we got there first.”

Since last year’s weekend sweep Hope has failed to grab another Ironman will certainly be looking for a little luck when he returns to the site of his most successful weekend in years.

“Either we have that places number or it just really likes us,” Hope said. “Either way, we will take it.” 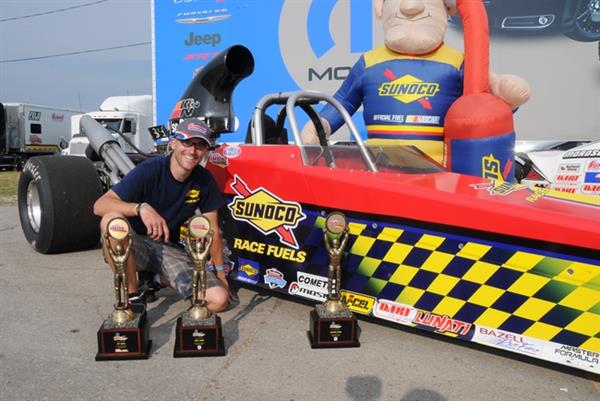 One of the biggest highlights of last year’s Grand Bend event was Harrod, Ohio native Jacob Elrod’s three wins in one day in sportsman competition. Elrod won the Quick Rod, Hot Rod and Top ET titles on Sunday of last year and, in the process, became the first IHRA racer to ever win three major classes in a single weekend in IHRA history.

Elrod went on to become one of the most decorated drivers of 2012 and earned IHRA’s coveted Sportsman Driver of the Year award in October.

Elrod will be back this year looking for similar success at the third of four Division 3 North Stars races on the Summit Racing Equipment Pro-Am Tour presented by AMSOIL. This year’s event will be the first time Grand Bend will host a Pro-Am doubleheader during the Nitro Jam Nationals weekend.