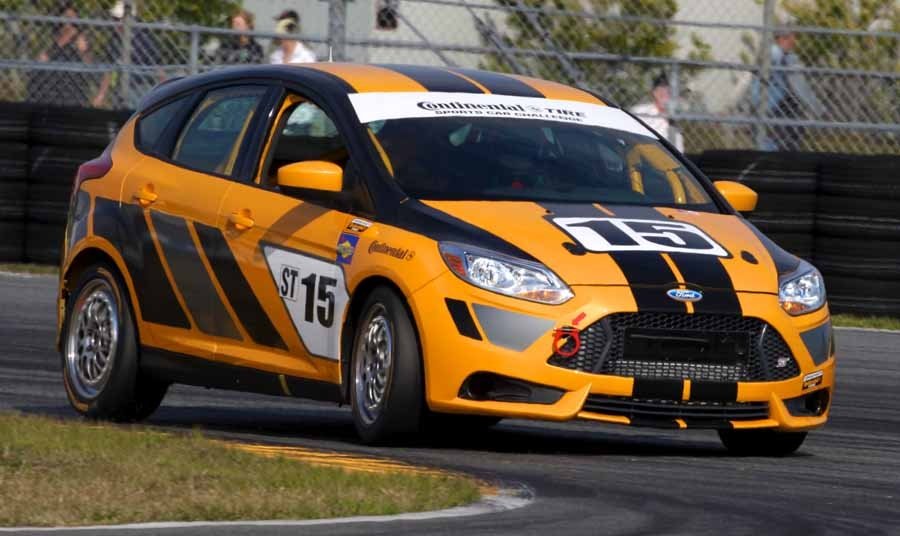 DEARBORN, MI – Ford Racing’s Focus ST-R will make its competition debut this Friday afternoon in the Grand-Am 200 at Daytona International Speedway in the Continental Tire Sports Car Challenge as part of the ST field during the Grand-Am weekend.

After nearly a year in development and countless tests, the newest offering in the line of Ford Racing turnkey race cars is ready to make its competition debut.

“The competition debut of all our FR family of turnkey ready-to-race cars has not been the completion of the journey but the transition to a new phase of the development process,” said Jamie Allison, director, Ford Racing. “Our partnership with Multimatic Motorsports has led to past success with the FR500C and the Boss 302R and their contribution to the product that will take the track at Daytona later this week has been critical.”

“Having delivered the successful Mustang FR500C and Boss 302R production-based race cars, we have a well-established process with how to develop such cars with Ford Racing. We employ the same approach for each – we start with the production car and go through each subsystem on the car and change what is needed (and allowed) to provide a competitive race car,” said Larry Holt, team principal, Multimatic Motorsports. “Really, the direction from Ford is that this car should be as close to the production car as it can be. Ford really wants to show that the Focus ST is a capable performance car.”

CTCC Back Under the Lights at GP3R

Don’t be fooled by its close resemblance to the Focus ST road car, which is intentional. The Focus ST-R is purpose-built for the track by Ford Racing in North America as a fully prepared competition car. It features a powerful 2.0-liter EcoBoost™ engine, FIA-regulation roll cage, uprated brakes and track-tuned suspension.

The all-new Focus ST-R has been crafted by engineers at Ford Racing – with technical support from Ford’s Global Performance Vehicles group – to allow it to compete in a huge variety of series, including Grand-Am ST, World Challenge TC and Canadian Touring Car Series. Ford also hopes teams will race the car in key European motorsport series and major national events such as the 24 Hours of Nürburgring.

Its linkage to the new Focus ST road car is no accident.

“From the beginning, the Focus and new Focus ST were designed to be drivers’ cars,” said Jost Capito, director of Global Performance Vehicles and Motorsport Business Development. “The road-going Focus features best-in-class brakes, handling and powertrains and the design and functionality of the various vehicle systems have helped us to develop a global technical specification for teams wanting to race the new Focus cost effectively. Ford Racing in North America has taken this effort and developed the new Focus ST-R. It is a perfect example of how a great production car inspires a competitive race car for enthusiasts.”

Initially targeted for homologation for American and Canadian touring car racing, Focus ST-R will be available to order from Ford dealers in North America by seasoned hardcore professional drivers, amateur racers and track-day enthusiasts as well. Ford’s vision is to broaden availability to additional regions in the future.

“We’re thrilled to be taking the Focus ST-R from concept to reality for motorsport enthusiasts initially in North America and potentially around the world,” said Allison. “The previous turnkey race cars we developed for North American racing have been hugely successful, so we are hopeful the ST-R will be the first such vehicle for global series and as a direct result of the company’s global platform strategy and our technical support program for motorsport applications of Focus and Fiesta models.

“This is a competitive turnkey race car that will allow our customers to compete successfully in multiple series around the world with minor modifications. And it shows the ongoing alignment of Ford Racing with our Performance Vehicles development group.

“Because the Focus ST-R is a production-based road race car, it features stock body panels and production parts where possible,” Allison added. “People who buy one will get a fully prepared race car that will only need communications equipment and the customer’s decals to go racing. Because of this, we’ve already had significant interest in this vehicle from numerous established race teams.”

For North American customers, the Ford Focus ST-R is the latest in a long line of turnkey race cars offered by the company including the Mustang FR500C, Mustang FR500S, Mustang Cobra Jet, Boss 302R and Boss 302S. The ST-R offers clear links to the Focus ST road car.

Development work on Focus ST-R will also result in a range of Ford Racing parts to be made available to racers and enthusiasts around the world.

Focus ST is powered by the 2.0-liter Ford EcoBoost engine, which offers an uncompromising mix of performance and efficiency. Ford’s lightweight, all-aluminum EcoBoost engine provides the power of a larger engine in a fuel-efficient smaller displacement using three key technologies.

The engine has strong torque levels in a broad, flat torque curve peaking at a projected 265 lb.-ft. The responsive torque output, a trademark of EcoBoost engines, is maintained despite the impressive peak figures.

Mated to the engine is a six-speed manual transmission, which has specially revised gearing to produce the maximum punch from each throw of the gearshift. The Global Performance Vehicles group paid significant attention to detail to ensure the ratio of sixth gear was perfectly in tune with the Focus ST, giving the driver optimum performance while remaining long enough to help maintain excellent fuel economy on longer runs.

Focus ST-R is part of an aggressive motorsports presence for Ford as its strategy to support motorsports development across its core global vehicle platforms gains traction. Ford is applying engineering and development expertise for vehicles like Focus ST-R to spur success in competition, similar to that being enjoyed by the Fiesta in RallyCross and X Games.

As the ST-R seeks to make its name on the track, the production Focus ST gives sporting enthusiasts an opportunity to enjoy a performance vehicle on everyday roads.

CTCC Back Under the Lights at GP3R

CTCC Races To Be Presented On TSN In 2021