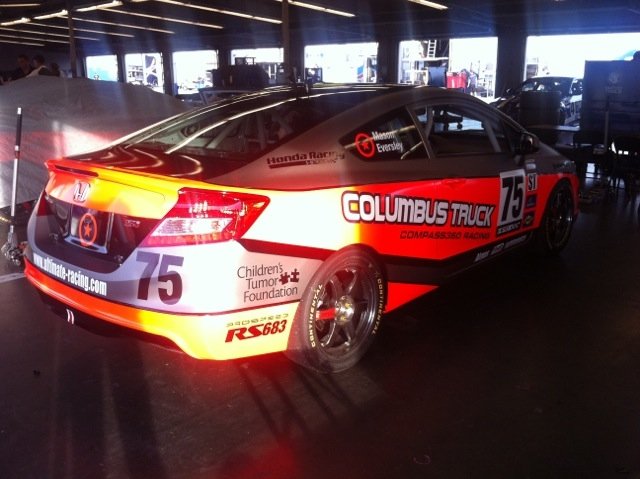 (Daytona Beach, FL) — Compass360 Racing (C360R) is no stranger to winning on the high banks of Daytona International Speedway, having been on the Street Tuner podium four straight years from 2007 to 2010. To extend that impressive result the team has assembled a driver roster for this weekend’s Continental Tire Sports Car Challenge race that’s arguably the strongest it’s ever had, counting three former series champions and one runner-up in the squad.

Grand-Am’s 2007 ST Champion Adam Burrows will share the #74 Dr. Kimberly Henry / Speed Secrets / HPD Honda Civic Si with Andrew Novich, who impressed the team in his rookie year the previous season. “I’m excited to be back with Compass360 Racing and all the guys, especially Andrew, who I think is going to impress a lot of people this year,” noted Burrows. “Coming into a series this competitive as a rookie is a real challenge, and I know Andrew finished fourth here last year, so we’re shooting for a podium finish in 2012.”

Burrows last ran with C360R in 2008, co-driving with 2007 ST Champion Trevor Hopwood, who will drive the #77 Joe Marina Honda / Luna-C / HPD car with Bo Roach. “Like Adam, I’m thrilled to be back in a C360R Honda after a couple of years in other cars.” remarked Hopwood. “These guys have always been at the front, and I have a really good feeling about this race.”

The Daytona event is particularly meaningful as Roach, promoter of Midnight Drags at Tulsa Raceway Park, is returning to Grand-Am racing after a two-year absence. “Running this race, with support from Joe Marina Honda in Tulsa, on the 50th running of the Rolex is just so amazing,” enthused Roach, who turns 50 this weekend. “It’s a 50-50 race for me!”

David Thilenius, the third former champ in the line-up, won the Grand-Am Street Tuner in 2010 with Compass360 Racing. He’s returning for his third straight season with the team, sharing the #76 Metropolitan Foods / HPD Honda with John Kuitwaard, who after a number of years doing select races has signed on for a full campaign. “I’m looking forward to driving last year’s car without the restrictor!” laughed Thilenius. “The Hondas have always been good cars at Daytona, and although we know the rest of the field is very strong I’m hoping to get a good points haul this weekend.”

Last year’s Street Tuner battle was a fight to the finish in the season finale, and if not for being spun out in the closing stages by a Mazda, Ryan Eversley might have won the title for C360R. As it was, he finished second, one better than in 2010. This year he’s aiming for the top spot, co-driving with veteran Grand-Am competitor Ray Mason in the #75 Columbus Truck / Children’s Wish Foundation / HPD car. “Ray (Lee) and the Compass boys have been working on this new 2012 Civic for the past six months and at the test a few weeks ago, I was really impressed,” exclaimed Eversley. “For a new car, I think it’s going to be ready to go right out of the box.”

The CTSCC Daytona race starts at 1:30pm on Friday, and will air on SPEED February 4th at noon.