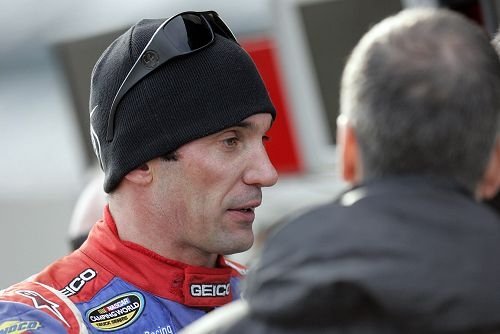 MOORESVILLE, NC (January 26, 2011) – This weekend will mark Max Papis’ 16th start in the Rolex 24 at Daytona. Having made his debut in 1996 with the Ferrari 333 SP with the late Gianpiero Moretti, Max Papis has ever since been known as “Mad Max.” He has competed in this historic race every year with the exception of 1997. The Rolex 24 at Daytona has always held a special place in Papis’ heart, from winning the 24hr race in 2000 in the SR class, and winning overall in 2002, this year he is ready for yet another victory, this time in the new #9 Action Express Racing Corvette DP.

This year is the 50th anniversary of the Rolex 24 at Daytona, and Max wanted to mark this anniversary with a special design on his Arai helmet created by Troy Lee Designs. Troy Lee and his group have painted Max’s helmets ever since he began racing in America. Unlike other times where Max has extensive discussions with the TLD designers about what to put on his helmet, he decided to let there creativity flow. After all, they paint helmets for the worlds fastest racers below is what they came up with.

The special livery Max Papis Rolex 24hr race helmet features an artsy hand drawn checkered flag pattern and pays homage to a couple of classic Corvette race cars from the past. The top right side of the helmet features the 1962 Gulf Oil Corvette which was raced by “The Flying Dentist”, Dr. Dick Thompson, in 1962 and went on the capture wins at Daytona and Sebring as well as take home the 1962 A-Production Championship. The top left side of the helmet features the 1972 Stars and Stripes BFG Lifesaver Radial Racers. During 1968-1976 racing Corvettes reached what some may argue as the peak of Corvette racing success. The John Greenwood BFG Corvettes made headlines by racing competitively at Le Mans, Daytona and Sebring in street tires against competitors using racing slicks. The Stars and Stripes Corvettes were an instant hit everywhere they went generating crowd appeal for being the fastest and nosiest cars.

“The Corvette is one of the most iconic cars of all time and the older Corvette race cars are just some of the most beautiful race cars ever built. We wanted bring back their spirit and let them race around the track once again so we put a couple old Corvette images on my good friend, Max Papis’s, helmet and I’m sure the winning tradition will continue to live on.” – Troy Lee

“I wanted to celebrate my overall 23rd 24-hour race and participation in the 50th anniversary of the Rolex 24 at Daytona with something special. After thinking about it, my helmet designs have been very special becoming my signature and my trademark since I was a young child,” stated Papis. “I talked with my good friend and great artist, Troy Lee, and his team at Troy Lee Designs and we came up with the concept that I wanted to celebrate the history of the race and at the same time keep the trademark colors of my helmet. I feel like this is a great way to celebrate the 50th anniversary of the Rolex 24 at Daytona and I’m happy to do it with such a special friend like Troy Lee who saw me develop from coming to America in 1996 as an unknown guy to establishing myself in the motorsports arena in America. I’m looking forward to bringing my TLD helmet to Victory Lane in Daytona and being that this is the 50th anniversary, the main goal and thought behind this special paint scheme was to pay tribute to this historic race.”

Max is one of the most versatile and accomplished race drivers in the world. A professional who through his career combined natural talent with hard work, focus and sheer determination to win as he climbed over each step, surpassing his limits and building an impressive résumé in the process.

In 1996, fresh out of Formula 1, young Max Papis came to America and made an immediate impact in the driving circles at the end of a particularly tough Daytona 24 Hours. At the wheel of a mended factory Ferrari prototype, Max put on a very spirited, ‘never-say-die’ drive to chase the leaders, which earned him the nickname “Mad Max” Papis. It has stuck ever since, and he has honored it taking part in 113 IndyCar Races with 3 victories and 15 podiums, winning the Grand Am Sportscar Championship in 2004 with Team Ganassi. Papis has participated in multiple 24-hour races and won the legendary 24 Hours of Daytona two times in 2000 and 2002). He has seven podium finishes in Le Mans and Daytona and won both the 12 Hour of Sebring and the Petit Le Mans for Corvette Racing two times. He won the SCCA GT Championship with Cadillac and became the first Italian after Mario Andretti to race full time in NASCAR. Max’s best result in NASCAR was a second place finish in 2010 Nationwide Series race in Montreal.

At a more personal level, Max is a man who is dedicated to his family, an avid cyclist, fitness enthusiast and committed to the causes that matter and touch him closely, such as the battle against cancer.