CAYUGA, ON – While qualifying took place for the Pro Modified Racing Association, the Quick 32 Sportsman Series presented by NAPA Auto Parts, and the Pro Bike & Sled Series presented by Wiseco Performance Products during the South Coast Community Weekend at the Cayuga Dragway of Toronto Motorsports Park, the eliminations scheduled for the Sunday had to be postponed due to the weather.

It was decided by track and race officials that the elimination rounds for the drag races will take place this coming weekend, August 10-12, during the Stratford Spectacular Hot August Nationals presented by Ideal Supply & NAPA Auto Parts at the Grand Bend Motorplex. 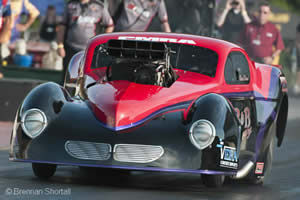 The postponed elimination rounds will be held during the three-day Stratford Spectacular event as well as a full package of qualifying and eliminations for all three drag race series.

The Pro Modified Racing Association competes with its two companion series, the Quick 32 Sportsman Series and the Pro Bike & Sled Series, and travel and compete together throughout the racing season, offering an exciting and diverse package of drag racing action.