Simmons’ ability to block out distractions and concentrate on her job as a driver was evident to all in attendance this weekend as she cut through the 16-car Top Dragster side of the Quick 32 Sportsman Series ladder. Simmons’ reaction times were consistent all weekend; with each of her round wins starting at the tree as she bested all of her Top Dragster competitors off the line.

In the Top Dragster final, Simmons defeated Buffalo, NY’s Jim Rubino. The win over Rubino paired her with another Buffalonian, Dan Flanigan, in the event final. Flanigan made his way to the finals by wading through his side of the Quick 32 Sportsman Series ladder by besting all the Top Sportsman competitors. In the event final Simmons took the win light with a 6.792 on a 6.68 dial. Flanigan was well off his previous pace posting a 7.934 on a 7.14 dial in.

“None of this would be possible without the support of my family especially my father, who years ago started me in a junior dragster, my crew, and all of my sponsors. No one knows how good this win feels! It couldn’t have come at a better time! Thank you to everyone who has made it possible! This has been the best day of my life… So far! Now I have a wedding to prepare for,” said an elated soon to be Mrs. Jon Salemi. 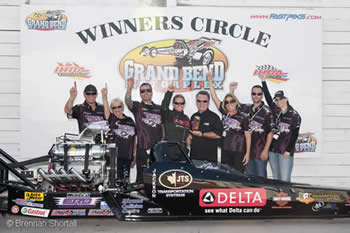 This weekend, Simmons also attempted to complete last week’s rain postponed event from Toronto Motorsports Park. Simmons made her way to the semi-finals of that event which was once again postponed and will be completed at the next Pro Modified Racing Association (PMRA), Quick 32 Sportsman Series and Pro Bike & Sled Series (PBSS) event the weekend of August 31 through September 2 during “Thunder at the Beach” back at the Grand Bend facility.