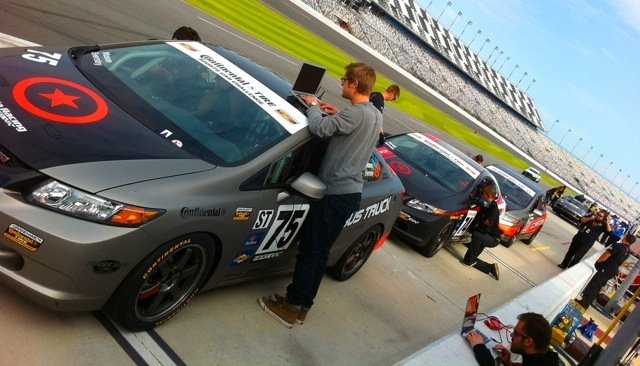 (Daytona Beach, FL) — The high-banks of the famed World Center of Racing, Daytona International Speedway, played host to the first Continental Tire Sports Car Challenge event of 2012 this past weekend, welcoming an impressive collection of competitors at the “Roar Before the 24” test days.

Compass360 Racing (C360R), winners of CTSCC Street Tuner championships in 2010 and 2009, brought two new 2012 Honda Civic Si Coupes to the test in the hopes of furthering the development of this new platform begun during the previous fall.

“The new car is a work in progress, but it’s going pretty well,” noted Technical Director Ray Lee. “The 2012 has a new 2.4L engine, and we’ve been working to turn a street car’s tune into something we can race with. We’re hoping to have a good package for the Daytona race in a few weeks’ time.”

The drivers were similarly optimistic. “It’s a change from the 2.0L motor we ran last year,” said Novich. “It’s got more torque but less horsepower, so you have to drive it a little differently. It’s good coming off the corners.”

“We’ve done a lot of testing with this car over the past four months,” remarked Team Principal Karl Thomson. “We ran it at Road Atlanta in October, and then did a very successful Press Launch at Willow Springs with HPD (Honda Performance Development). It then went to SEMA where it was featured in the Honda booth, and then back to HPD where additional fabrication of new parts and further testing was done.”

Also at the test were long-time C360R driver Bo Roach, who shared the #77 Luna-C Racing / HPD car with Remo Ruscitti, a young karting talent making his first CTSCC appearance. Both performed admirably at the helm of their 2011-spec 4-door Honda, turning the team’s fastest lap on Saturday.

“It’s great to have Bo back with the team, and Remo really impressed us,” said Thomson. “For a kid in his first time in a front-wheel-drive race car, with very little sports car experience, he got up to speed incredibly quickly. I hope to have him in a Conti race with us later this season.”

The team returns to its Toronto, Canada shop to prepare its four-car effort at the Daytona race, which will run January 26-27th, 2012. Details can be found at http://grand-am.com.