Greg Belyea of Excel Tower Service and driver of the #25 Late Model grabbed the checkered flag Saturday night at Brighton Speedway but the real winner’s are the children who will receive the 350 toys collected in support of the Toy Drive presented by Belyea and his family.

BRIGHTON, ON – Mother Nature must be a fan of Brighton Speedway this season. As impending clouds gave way to sunshine in the afternoon, drivers, crew and fans made their way to the 1/3-mile clay oval for another action packed night of excitement. The complete race program presented by Behan Construction kicked off with the Excel Tower Service Toy Drive and was successful in netting over 350 toys and $300.00 in cash donations to support local initiatives for Christmas.

“Brighton fans are the most dedicated and generous group of individuals I know and we are proud to be a part of such an amazing community,” said General Manager Angela Rinaldi . At around 7:30 p.m., clouds rolled in over the speedway and weather was threatening, causing officials to expedite the program and postpone the scheduled Fan Appreciation to August 18.

First to the track for the feature line up was the Quinte Septic 6 Cylinder Stingers. #17 Jeff Inia picked up his first ever feature win holding off some hard chargers in #15 Robert Farrell, #42 Andy Fletcher and #19 Del “Chili” MacGregor.

Quick to the follow was the Bill’s Johns Comp 4 Division with 24 cars in competition and 15 laps to the finish. #17 Jeff Humphry, coming off a win at Humberstone Speedway last Sunday continued his hot streak took the checkers at Brighton. He was followed over the line by #66 Mark Packer, #43 Tom Vance, #44 Brandon Wilkie and #81 Christian Gregory.

Without any hesitation the Bainer’s Radiators Canadian Modifieds hit the track for their 25 lap feature. #11 Dan Ferguson had a banner night picking up his second win in three weeks. Ferguson had a great start on the outside and by the end of lap two he was in fourth place. He methodically picked off the remaining three cars one at a time, taking the lead by lap 13. Ferguson’s recent hot streak has put the reigning champion on top of the points standings for the first time in 2012 with a slim lead over #19 Zeke McKeown. Ferguson was followed across the line by #12 Adam Whaley, #87 Andrew Hennessy, #18 Kevin Scott and #1 Shawn Gregory.

Next on the race card saw the Vanderlaan Building Supplies Pro Late Models in a 30 lap feature. Starting on the front row were #57 Charlie Sandercock and the #55 Mark Rayner. The competitors raced hard around the track and Sandercock was able to jump out to the front for significant lead like the week before. And just like the week before while it appeared he had the race in his hands when getting into lapped traffic it all came apart for Sandercock who has struggled in the middle part of the season.

Phillips Wins Another At Brighton With Southern Ontario Sprints

Just past the half way mark in the race Sandercock came up on the back of the #92 Adam Turner who was off the pace and seemed to catch Sandercock off guard caused him to spin for a caution and head to the pits for a quick check on the car. After the caution it would be the #36 of Brandon Mowat who would take over the top spot with #77 Caley Weese, #29 Phil Potts and Raynor all chasing Mowat. Weese would try the top side a number of times and then back down to the bottom to get around Mowat but Mowat would hold strong.

While the two battled it out it was late race hard charger #25 Greg Belyea that would go around the top making three wide to complete the pass for the lead. Shortly after Weese would get by Mowat for second and the top three would finish that way with Belyea picking up his second win of the season. #11 Corey Earl and #29 Phil Potts rounded out the top five. In his victory lane speech Belyea said, “I am happy for the win but even happier for the great support we got for the toy drive! The kids are the real winners here thanks to the Brighton Speedway fans and drivers.”

The night wasn’t over yet as the Brighton Automotive Pro Stocks took the green flag in race three of the home track Duel in the Dirt series. The 25 lap feature ended with the #72 Doug “Big Smooth” Anderson first to the checkered flag. Anderson started eleventh and took the lead on lap ten passing #36 Mitch Rosborough on the high side. Anderson would win his second in a row and tenth of the season. Anderson was followed by #07 Percy Walsh, Rosborough, #74 Mike Lucas and #83 Jay O’Hara. 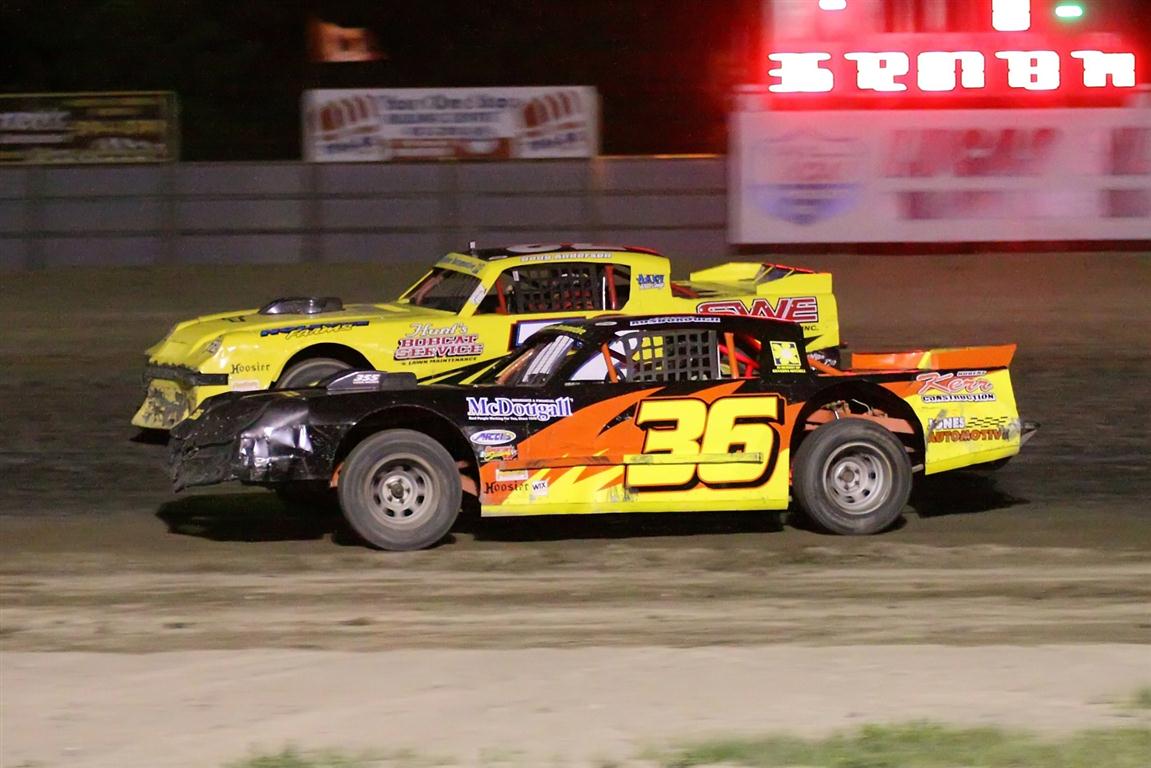 The #72 “The Big Smooth” Anderson battles with #36 Mitch Rosborough at the Brighton Speedway Saturday night but overtook him on lap 10 for Anderson’s tenth feature win of the season.

With the rain still holding off the Bainer’s Radiators Canadian Modifieds had an opportunity to put their crew in the car for the once yearly Mechanics Race. Pair of future Brighton Speedway wall of fame veterans was in this race with Richard Ferguson driving the #18 and Sam Hazelwood drove the #46 car. Ferguson who pits for his son Dan and son-in-law Kevin Scott looked like he had not lost his touch behind the wheel leading from green to checker in the eight lap event with Hazelwood coming home second.

Phillips Wins Another At Brighton With Southern Ontario Sprints