Wetter and wiser, Rana and Ferrari Enzo have unfinished business at Targa 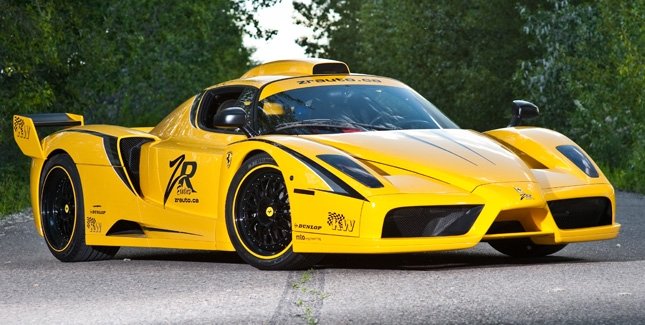 CALGARY (January 2, 2011) – He became famous overnight as the driver who sailed his million dollar Ferrari Enzo into the river, and now Zahir Rana is eager to get back to Targa Newfoundland to put his “little miscalculation” behind him and finish what he calls one of the most amazing motoring events in the world.

Rana, of Calgary, has entered the 2012 Targa Newfoundland in the Fast Tour category with the same Ferrari Enzo that became a world-wide sensation when he and co-driver Roland Linder of South Carolina, slid off the road on a Targa stage in Marystown and ended up in the river leading to Mortier Bay. Captured on video, the incident, the subsequent recovery of the car and thoughtful interviews with Rana and Linder were posted on YouTube and seen around the world. Rana was inundated by media and interviewed for print and broadcast stories about how a rare, $2-plus million Ferrari nearly floated out to sea.

Not only are Rana and his car coming back for Targa Newfoundland 2012, he’s updated the Ferrari with even more radical looks and increased power. The car was transported to a specialty shop in Germany almost immediately after its unscheduled plunge into the salt water, where the crash and water damage were repaired and the modifications completed. “It looks obnoxious,” Rana confides.

Rana’s candor about the incident is refreshing. “I learned a lot,” he says. “Obviously, it was unexpected. As a driver, I’ve had incidents on racetracks and that’s normal. But I wasn’t attuned to the changing nature of the roads in Targa. At first, I couldn’t believe this was something I didn’t control. But I’ve come to understand it and I’ve learned from the experience. It was a little miscalculation that made me famous.”

In fact, the exposure was actually good for his Calgary exotic car business. “It cost me $500,000,” he quips, “but it made me famous.” Early in December he released a DVD on his adventure which is now available through his website at ZRAuto.com.

He also approaches the 2012 event knowing what he wants. “These are fabulous cars,” he says. “The sound, the acceleration, the handling – unbelievable. But you don’t have to drive them absolutely flat-out all the time to thoroughly enjoy them. Just driving these cars on these roads gives me pleasure.”

Not only is Rana returning with the Ferrari Enzo in FXX trim, he’s bringing a posse of exotic car owners to join him. Far from dissuaded by his adventure, the group, including Rana’s wife, are eager to experience what he describes as “the best time you can have in the automobile world.”

“Not coming back never entered my mind,” he says. “I loved the experience. We made new friends, we drove through beautiful country that needs to be seen to be believed, we met the best people in the world – I was inspired!”

And when he gets to that fateful corner in Marystown that made him famous?

Owned and operated by Newfoundland International Motorsports Limited, Targa Newfoundland is one of three internationally recognized Targa motorsports events in the world. The 2012 competition starts in St. John’s on September 8 and concludes back in the capital on September 15. The 11th annual rally will cover more than 2,000 kilometres of the challenging, twisty roads of the central and eastern portion of Newfoundland, including up to 450 kilometres of closed-road, flat-out Targa stages

Targa Newfoundland Planning For The Future