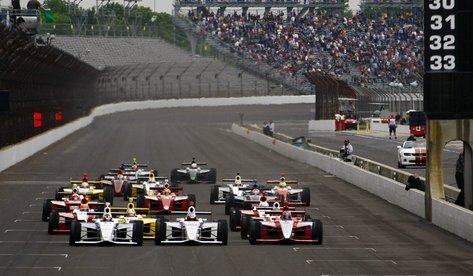 “Our goal is to prepare Firestone Indy Lights drivers to become successful IZOD IndyCar Series drivers,” said Tony George Jr., manager of business development for Firestone Indy Lights. “We’ve seen how this has worked recently with drivers having success after graduating from the series. The 2012 schedule continues to help us reach that goal by helping our current drivers gain experience and succeed on all types of racing circuits.”

Firestone Indy Lights teams will race at the Raceway at Belle Isle for the first time under INDYCAR sanction on the weekend of June 2-3 as part of the Chevrolet Detroit Belle Isle Grand Prix. The CART-sanctioned Indy Lights raced at Belle Isle from 1992-2000 with drivers such as Tony Kanaan, Robbie Buhl and Eric Bachelart among the race winners. The series’ return to the 2-mile oval at Auto Club Speedway in Fontana, Calif., on Sept. 15 will be the first Firestone Indy Lights race at the track since 2005.

Eight venues that hosted Firestone Indy Lights races in 2011 return and will be run in conjunction with the IZOD IndyCar Series and have additional support from the Mazda Road to Indy. Firestone Indy Lights returns as the headline event at the Grand Prix of Trois Rivieres on the streets of Trois Rivieres, Quebec. An additional event will be announced at a later date.

For the 10th consecutive year, the Firestone Indy Lights season will begin competition in the state of Florida, with a race on the streets of St. Petersburg on March 24-25. The series will then return to the 2.3-mile Barber Motorsports Park on March 31-April 1 before heading to the streets of Long Beach, Calif., for the fourth time on April 14-15.

“The opportunity to compete on Carb Day at Indianapolis is an experience that is second to none for our drivers, teams and sponsors and the highlight of the schedule each year,” George said. “We feel like our schedule demands the ability of both drivers and teams to master a variety of venues with the end result of a champion that is fully prepared to be an IZOD IndyCar Series driver.”

The Belle Isle race and the oval event at Iowa Speedway precede the Canadian stretch, which features races on the streets of Toronto’s Exhibition Place, Edmonton City Centre Airport and Trois Rivieres. A return to the streets of Baltimore will lead into the race at Auto Club Speedway.

Firestone Indy Lights is the premier ladder series for drivers and teams striving to compete in the IZOD IndyCar Series and the Indianapolis 500. The top series in the Mazda Road to Indy development system, teams compete for more than $3 million in prize money in cars that are second in speed only to the IZOD IndyCar Series at most tracks they visit. Graduates of this fast and cost-effective series include Marco Andretti, Ana Beatriz, Ed Carpenter, Wade Cunningham, Jay Howard, James Hinchcliffe, JR Hildebrand, Alex Lloyd, Charlie Kimball and Raphael Matos.