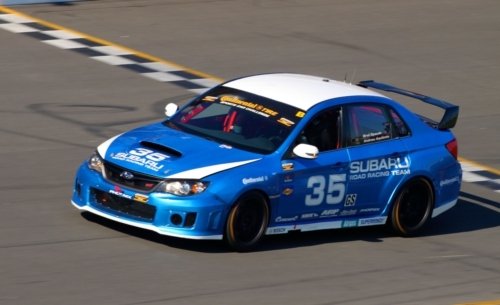 Fielding a race-prepped 2012 4-door Subaru WRX STI developed specifically to compete in a class replete with rival team cars developing over 400 horsepower, SRRT has been working on a technical progression program for the #35 STI during the off-season.  Traditionally serving as round one of the championship, Daytona International Speedway incorporates a portion of its high-banked oval plus infield complex to create a 3.56-mile, 12-turn road course, which places a high emphasis on maximum power output and aero efficiency.

Co-drivers for the #35 Subaru WRX STI will be Andrew Aquilante of Chester Springs, Pa., and Bret Spaude of Bushnell, Fla., who comprise one pairing in a class of over 30 teams set to contest the Grand Sport class.

SRRT Principal Joe Aquilante noted, “We’ve enjoyed a very productive off-season, and our team is looking forward to getting back to the business of racing our Subaru WRX STI.  Our drivers have been focusing on honing their physical fitness while our technical staff has been diligently progressing our car development plan.  To say that we’re excited for Daytona is an understatement.”

Added James Han, motorsports marketing manager for Subaru of America, Inc., “I feel confident that we have the elements in place to mount a successful bid for the championship.  To begin, the Subaru WRX STI lends itself as a credible performance platform from its symmetrical all-wheel drive system to its Subaru BOXER engine.  The team is looking to build upon our experience from last year’s campaign and convert our solid qualifying efforts to podium results.”

For more information about the team and the cars, call Joe Aquilante at 610-482-0141.  Fans can visit the team’s website at www.srrtphoenix.com and the Phoenix Performance website at www.phoenixperformance.net

All-Wheel Drive vehicles, parts and accessories through a network of more than 600 dealers across the United States. All Subaru products are manufactured in zero-landfill production plants and Subaru of Indiana Automotive Inc. is the only U.S. automobile production plant to be designated a backyard wildlife habitat by the National Wildlife Federation. For additional information visit www.subaru.com.

Team Yokohama Returns to One Lap of America with Subaru

Premiere for Audi at the Daytona 24 Hours