Here’s a sneak peek (below #77) at Delaware Speedway Super Stock fan favourite Darrell Lake’s ride for the 2012 season. The London, ON frontrunner debuted the new look at the 2012 London Auto Show. Lake has announced he will return to Delaware for a full slate of competition in 2012, and will also launch a highly anticipated touring schedule. (UPDATE) Lake will return to Delaware on a part-time basis in 2012, while focusing the majority of his efforts on a highly anticipated touring schedule. Outside of Delaware, Lake hopes to compete in Sunset Speedway’s MRE Super Stock Pro Series and make a debut appearance at Fraserville, ON’s Kawartha Speedway, in addition to other still to be confirmed events. 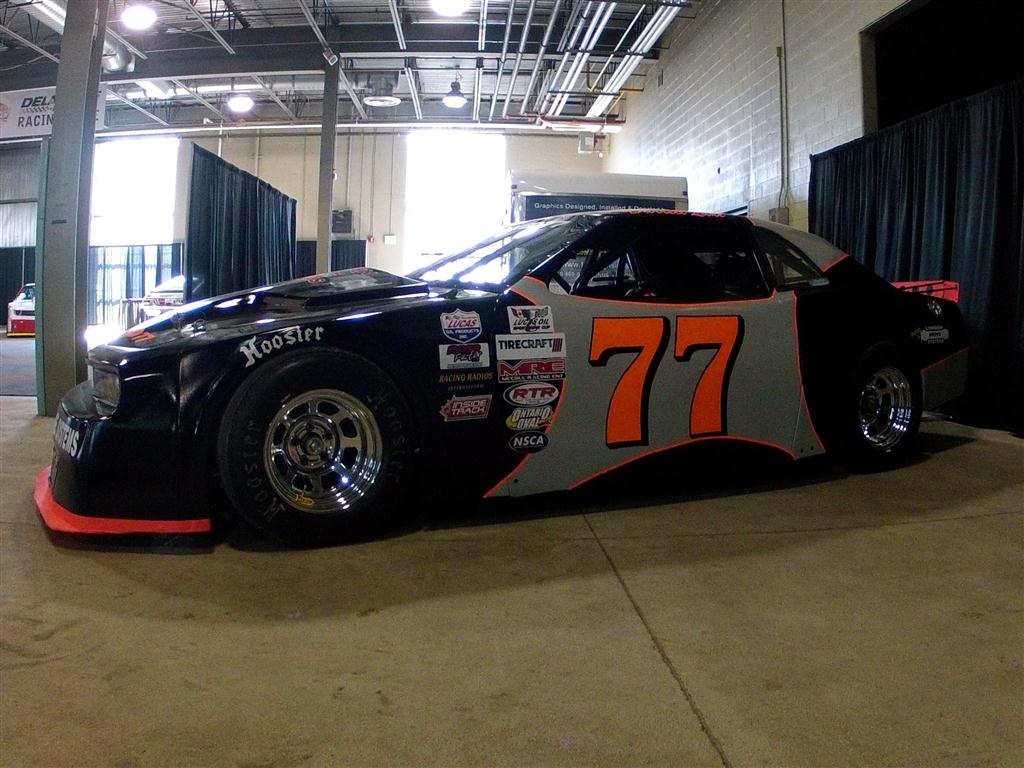 2007 OSCAAR Super Late Model champion Derrick Tiemersma (top) has confirmed a return to the province’s premier touring series in 2012. The Newmarket, ON driver last saw active competition during the 2010 season, finishing within the top-5 in series points. Tiemersma has admitted that without additional sponsorship commitments, running all 13 tour events will be difficult, but affirmed the team will be in action with the rest of the tour to ring in the new season at Sunset Speedway on May 20th.

The team is excited to welcome back Wayfreight and Speedy Auto Machine to their 2012 program, in addition to first time sponsor Spira Fire Protection. Any parties interested in a sponsorship package may contact Tiemersma at derrick_tiemersma@hotmail.com.

In other OSCAAR news, 2010 Flamboro Speedway Late Model champion Shawn Chenoweth will be returning to the Super Late Model ranks fulltime for the 2012 season. The Ayr, ON driver will compete with the same Jeff Hanley-built chassis that carried Chenoweth to a number of Pro Late Model victories in 2011. With his fully converted chassis, and brand new Super Late Model motor, Chenoweth will be ready for OSCAAR’s opening night on May 20th. In addition to his OSCAAR schedule, Chenoweth will also compete on a part-time basis as part of the Sunset Speedway Super Stock division, with plans to debut his Chevrolet Camaro Super Stock on May 19th. Chenoweth’s OSCAAR and Super Stock teams will both carry sponsorship from KR Communication, XWest Carriers, Boyder Systems, Automotive Truck & Tire, Transaxle Parts, London Recreational and Premium Plus.