CHATHAM, ON – The name Hoekstra is synonymous with success in the 41-year history of South Buxton Raceway. Darryl Hoekstra added a new chapter to his family’s legacy on Saturday with his first career feature checkered flag. And just like his father Eugene during his heyday, the Chatham native saved his best for a big race, winning the Mid-Season championship in the Schinkels Gourmet Meats UMP Modifieds.

But his win came at the expense of teammate Jim Fletcher, who led 12 laps before being penalized late in the race for an incident which occurred on the previous restart. “To be honest, I would have been really happy finishing one-two because Fletch was super-fast, I had nothing for him,” Hoekstra said. “I feel bad for him, but I guess if he didn’t win, I was the next best one to win.”

Fletcher was penalized for jumping the green on the lap-10 restart when both he and Hoekstra got by the race leader Paul DeGoey, of Leamington. Drivers are penalized two positions, which are enforced at the next caution.

But the yellow flag didn’t wave again until lap 22 of the 25-lap race.

Hoekstra, who ran second to Fletcher for those 12 laps, inherited the lead and held off Leamington’s Paul DeGoey and Fletcher for the final three laps to seal his first feature win.

While Fletcher was happy for his young teammate, he was bitterly disappointed with the ruling that spoiled his chance of his own first feature win since returning to racing last year.

“Our goal was to come out here and win a feature, and the only thing that stepped in our way was the bad call,” said Fletcher, choosing his words carefully.

Fletcher said DeGoey admitted to him afterwards that he simply didn’t go when the green came out.

“He (DeGoey) said that the caution light was still on and he wasn’t even thinking about getting on the gas,” Fletcher said.

“That doesn’t mean I jumped the gun. I was on the gas when the green flag came out … there’s not much more I can say,” Fletcher said.

Eugene Hoekstra, 55, is one of the most successful drivers in the 41-year history of the track. He won seven season points championships – including five in a row from 1979-83 – and eight championship races in three different classes in his illustrious career.

“I can’t remember all the times I’ve seen him win,” the younger Hoekstra said.

“I wish he was here tonight, though,” he added, as his dad was in Eldora for the Kings Royal sprints show.

Hoekstra became only the third different feature winner this season, breaking the domination of Shrewsbury’s Jim Dale Jr., with six feature wins, and Leamington’s Joel Dick with the other three. 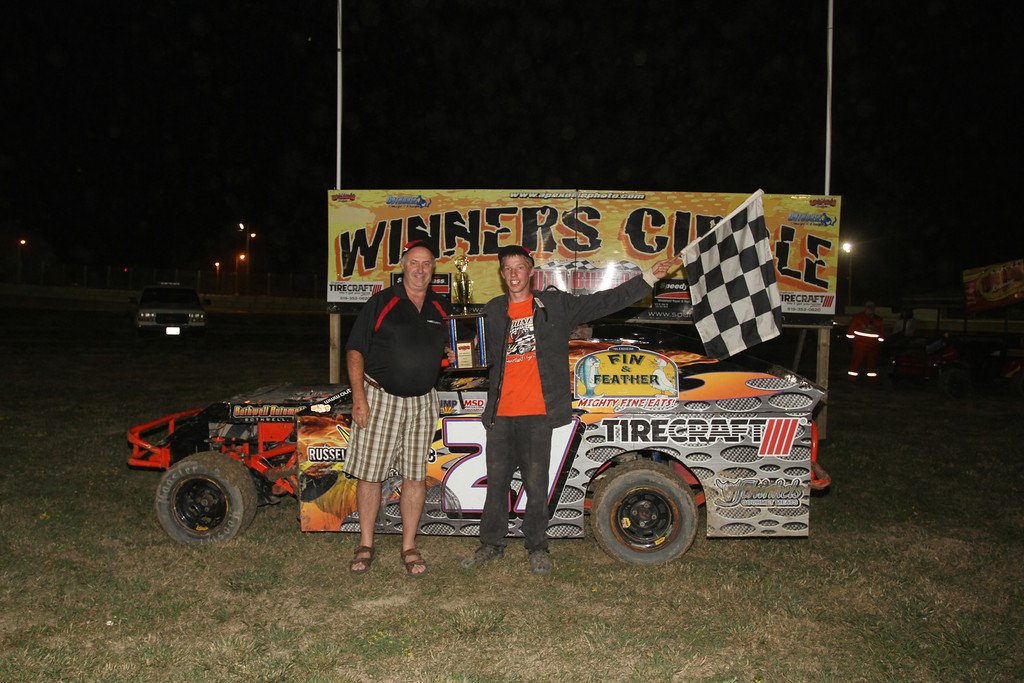 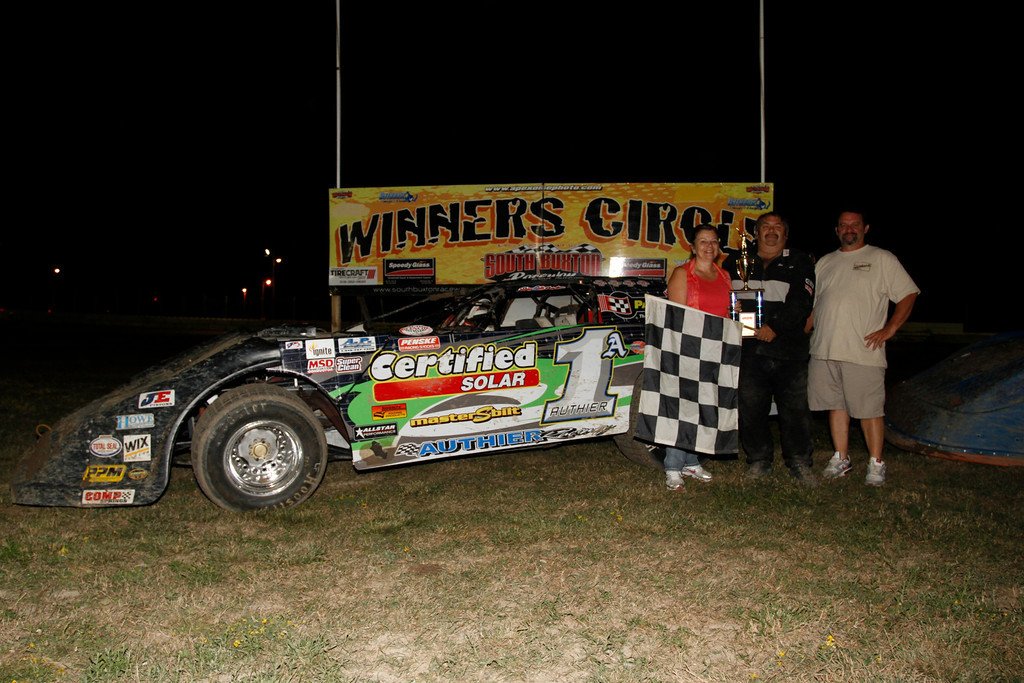 And it was a ‘double first’ for Chatham’s Randy McKinlay, who won the first mid-season championship of his long career as well as his first feature win in the Windride Transportation Sport Stocks division.

McKinlay started in the second row but took the lead field entered the straightaway for the first time and never looked back.

“I don’t know where that came from,” McKinlay said after leading all 25 laps of the caution-free race.

“It was a really good track and I think the 38 car (Essex’s Doris Lajeunesse) held them back and got me a good lead.

“And there were no cautions, so that really helped.” 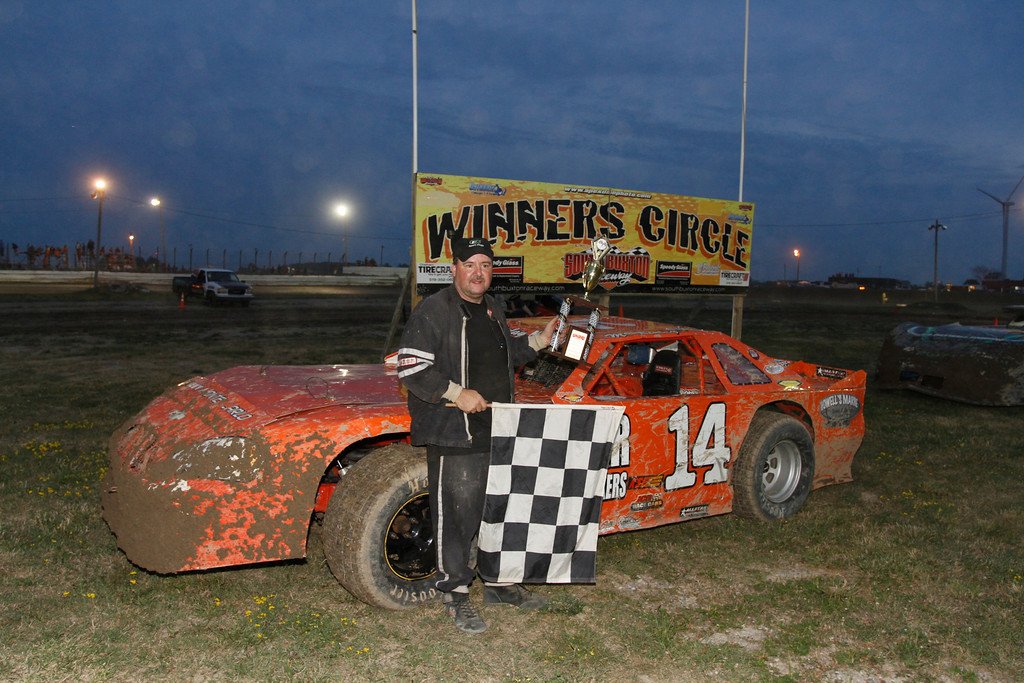 McKinlay took over the ride, which is owned by his brother Rob, on June 9.

“He was having a hard time getting a driver and he told me either I drive the car or he was going to cut it up,” he said.

Lajeunesse finished second, followed by his brother Patrick Lajeunesse, Grande Pointe’s Tyler Lozon and Chatham’s Jason Fox to round out the top five.

McKinlay had an opportunity to join Dale Jr. as the only driver to win mid-season titles in two different classes in the same night as he started on the outside pole for the Comp 4 feature.

But his chances ended early after contact with teammate Steve Shaw Jr. broke something in the back end.

“Oh, I was thinking about it,” he said of matching Dale Jr.’s feat of winning the Late Model and Modified mid-seasons in 2008. “But it was all I could to do hang on to fifth,” he said of his finish.

Jones won the race in dramatic fashion, taking the lead from Cottam’s Rob Quick in turn three on lap 18 and led the final lap and-a-half to extend his mid-season and current win streaks.

Jones led the first two laps but ran third for the next 16 circuits while Quick and Cottam’s Denis DeSerrano traded the lead several times.

DeSerrano was sent to the back for contact with Quick, which brought out a caution with three to go.

This allowed Jones to move up to second and he wasted no time getting past the leader.

“I saw how Denis got by him so I knew I had to get down to the bottom to pass him,” he said of chasing down Quick.

The two made contact but not enough to slow Jones’ momentum, who at that point was more worried about his 14-year-old brother Trevor, who was right there in third.

“When me and Quick tagged, I thought he was going to get under both of us,” he said of Trevor, who finished third for the second straight feature.

Authier, who started on the outside, took the lead from Chatham’s Gregg Haskell at the drop of the green and drove away to an easy win in the 25-lap caution free Late Model feature. “I got an excellent start, the flagman told me after the race that I was right on the money,” Authier said after his fourth straight and fifth feature win of the season.

“Once you get up front, you have to pace yourself, hit your marks and just keeping working forward.”

Haskell ran second for the full 25 laps while Goderich’s Mark Glassford and Chatham’s Jim Jones were the only cars to finish on the lead lap.

Brittany Golden Sets Her Sights on the 2021 Local Racing Season