by Derek Rockel
in Press Releases
0 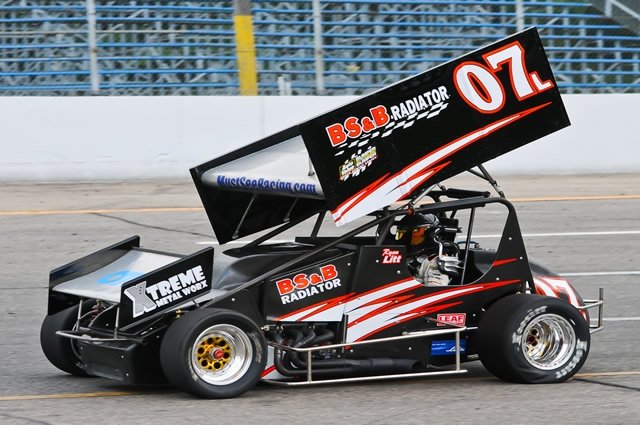 The Bristol event on October 1 was a career highlight for many of the racers who competed in it. It was also the season finale for the Must See Racing Xtreme Sprint Car series, which featured a three-way fight for the title. Ryan was in the middle of it after qualifying third at more than 147 miles per hour, but he wasn’t able to finish well enough in the feature race.

“I really enjoyed Bristol,” says Ryan. “It was definitely a highlight of my career. Just entering the track gives you goose bumps: You enter in turn three and go down 40 or 50 feet of banking, and it feels like you’re entering a coliseum. It’s really overwhelming. Unfortunately what looked to be a good day didn’t end up as we would have liked it to, and we could only muster up a 7th place finish after a strong qualifying effort.”

The Bristol event also presented some unknowns for the racers. Sprint Cars had never raced on the high-banked concrete track before, and nobody was entirely sure what to expect. As it turned out, the racing was very good, and there is a good possibility of more events there in the future.

“The track was a blast to race on,” says Ryan. “Smooth as glass, and the banking felt great. The banking was a really easy transition, so it didn’t intimidate quite as bad as a Winchester or Salem would the first time. The speeds were pretty unreal as well. It made the cars feel like they only had 100 horsepower. You were always on the gas flat-out trying not to scrub off any speed in the corners. It was really similar to Indy car style racing – all about momentum.”

Ryan competed in 16 races this season, recording 9 top five finishes, and 1 feature win, which came at Dixie Motor Speedway on August 5. Ryan finished second in the Must See Racing Series Xtreme Sprint series championship, just 4 points shy of the title. By many standards it was a successful season, but Ryan and the team are not satisfied, and they’re looking to improve for next year.

“Overall our season was pretty good,” says Ryan. “We had a lot of consistent top five finishes, but really never had a fast enough car to take the win. It was one of those years where we kind of stayed below the radar, which is unlike us. I would have liked to win a lot more races and qualify better. We are making changes as we speak to try something new for next year. I’m not a driver who is satisfied with top fives. I like to win.”

Plans for next season are already in high gear, and Ryan wants to start early running indoors and in the southern states. Next year he wants to try for the Must See Racing title again, and race in a variety of open wheel divisions.

“This winter I’m trying to race whenever I can,” says Ryan. “I’m currently planning to run with TBARA in Florida during Speedweeks, and I would love to run a midget indoors as well. Next year plans are to run MSR and AVSS as much as possible, and hopefully I will be running the dirt at Ohsweken as much as I can. I tried (dirt) once last year and I got really hooked on it. I love a new challenge, and the one-time race really left me licking my lips for more. I love trying new cars and learning how to get fast in them. I would love to get back into a Supermodified too.”

Ryan Litt Racing still has 2011 t-shirts left, and will donate fifty percent of the proceeds of these remaining shirts to the Children’s Hospital at London Health Sciences Centre at Christmas time. Medium, Large, and Extra-Large shirts are still available. Visit www.RyanLitt.com today to order yours.

Make sure to check out Ryan’s new HD in-car camera footage. The latest edition finds Ryan flat-out in qualifying around Bristol’s high-banks. Just go to Ryan’s official YouTube profile at www.youtube.com/user/RyanLittRacing to watch the videos…and crank up the volume!

Ryan and the team would like to thank all their sponsors for their support during the 2011 season, including BS&B Radiator, Linton Media, Linde Gases, and Xtreme Metal Worx.