by Inside Track News
in Industry News & Products
0 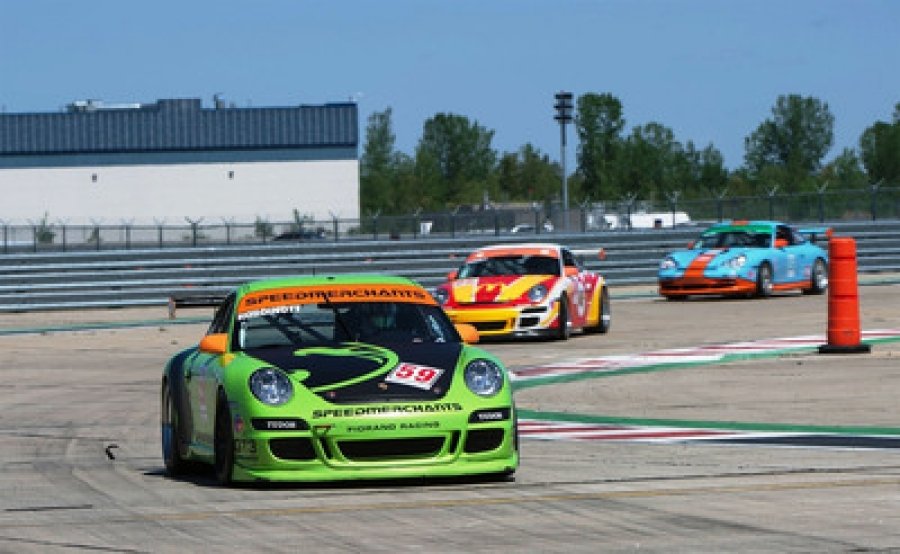 BOWMANVILLE, ON, July 20, 2011 /CNW/ – When the first race of the Porsche GT3 Cup Challenge Canada blasted past the green flag at Calabogie Motorsports Park in early May, few people knew what to expect from the new series or its participants. In a field of six cars, the racing proved to be gripping throughout the pack. After a stop at the ICAR Circuit in Mirabel, Quebec, with a similarly-sized field, and equally close racing, the season finale, part of the coming weekend’s Mobil 1Grand Prix of Mosport, has produced some big surprises.

The biggest – literally – of which is the size of the Mosport field. Sixteen cars have been entered for the series’ two races on Saturday and Sunday, with competitors from as far away as Vancouver, parts of the United States and from Bogotá, Columbia.

“This first season of the Porsche GT3 Cup Challenge Canada has turned out to be extremely gratifying for all of us at Porsche Cars Canada,” said Joe Lawrence, President and CEO. “Not only have we brought back Porsche single-make racing to Canada – the place where it all began in the 1980s – but we have really seen the series start to take root and grow, with almost triple the number of cars since I threw the green flag to start that first race in May. Judging by the calls we’re already getting, we expect even bigger and better things for next year.”

“Tough, close racing is what a single-make series is all about,” observed Rick Bye, former Rothmans Turbo Cup race winner. “The engines are sealed and no modifications are permitted. That means it’s all about the driver and the quality of the car’s setup by the crew. True talent will stand out.”

Perry Bortolotti, of Kanata, Ontario, winner of three of the first four races, is hoping to sew up the Platinum Cup title this weekend. Bortolotti is fresh from his run at the Porsche Carrera World Cup race at the awesome Nurburgring in Germany, where he was the sole Canadian representative in a field of nearly 100 Porsche GT3 Cup Cars.

“Mosport is a classic race track,” he observed. “But coming from the Nurburgring, it is no longer quite as intimidating as I once thought.”

Fellow competitor and Speed Merchants/Fiorano Racing teammate Jim Hoddinott sees Mosport as his ultimate challenge.
“Mosport is the ultimate test of speed. It is the absolute best track in North America and also the most intimidating,” he observed. “It really separates the men (and women) from the boys.”

As for the series, Hoddinott is also impressed. “The first two events really established the baseline for the talent and professionalism needed to compete at this level. And this weekend – with all the additional high-caliber entries – will be the ultimate test and will set the tone for 2012.”

Shaun McKaigue, a veteran of all four of this season’s races, leads the Gold Cup championship points race. He agrees the future looks bright. “It was a leap of faith on everyone’s part – drivers, organizers, IMSA, Michelin and Porsche Cars Canada. I am very pleasantly surprised how well everything has turned out.”

The Porsche GT3 Cup Challenge has become a fixture on the racing scene around the world. Run on every continent except Antarctica and Africa, it is estimated that the GT3 Cup Challenge will hold 120 events and 255 championship rounds in 2011. The Canadian series is divided into three classes: Platinum Cup, featuring the more powerful 2011 and 2010 Porsche 911 GT3 Cup cars, Gold Cup, which includes 2005½ – 2009 Porsches and Silver Cup for 996-generation Porsches. All three classes run on Michelin tires.

The two races of the season finale run Saturday, July 23 at 4:50 PM and Sunday, July 24 at 8:55 AM at the Mobil 1 Presents the Grand Prix of Mosport. The season’s overall champion will be presented with a Tudor Heritage Chronograph, provided by Rolex Canada.