TORONTO, ON – Team Cadillac driver Johnny O’Connell won today’s running of the Pirelli World Challenge Toronto Grand Prix GT at Exhibition Place. Teammate Andy Pilgrim made it a Cadillac one – two by coming second. In qualifying, earlier on Sunday, O’Connell (Flowery Branch, Ga.) put his No. 3 Cadillac CTS-V on the pole with a time of 1:10.304, his sixth pole position of the season. Teammate Pilgrim drove his No. 8 CTS-V to a fourth place qualifying run with a time of 1:10.832.

“The practice that we had on Friday was minimal,” O’Connell said. “I had a slight brake issue on my car in practice. I was able to run strong in practice, but just didn’t have the full confidence I needed. Team Cadillac did a great job to get it fixed for qualifying. I was excited going into this morning’s session. Even though we weren’t on the track yesterday, I got a million laps in watching the IndyCar race and the Touring Car guys. I had already driven the perfect lap in my head. On my first flying lap, I made a little mistake and then on my second I could not have asked for a more perfect lap. This Cadillac team gets better every race weekend. We are making improvements on the small things every race. That is why this team is successful.” 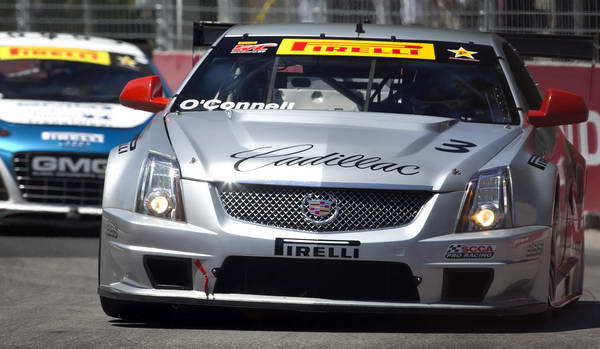 Pilgrim also had a strong practice and qualifying run.

“Practice on Friday morning was good,” Pilgrim said. “Turn One was very slippery that first practice, almost like it was wet. The officials did some work on it for the IndyCar guys, combine that with the rubber from the weekend and it wasn’t that bad today. The whole track was faster. I had a good qualifying run. I was ok for a while in second position early in the session, but got pimped by a couple of cars later. Our car usually runs the fast laps at the beginning of the session not the end. Starting fourth is tough on a street course because it is so hard to pass. I will just have to manage my race and take advantage of every opportunity today.”

When the lights on the starting lamp went off at 12:50 pm this afternoon, the Volvo of Alex Figge, starting second, got the jump on O’Connell into Turn One. Pilgrim filled in fourth position. As the race progressed O’Connell was hounding the Volvo for the top spot in GT. On lap 12, with reported water on the track in Turn Six, Figge spun and O’Connell assumed the lead. Nine laps later, the No. 14 Audi of James Sofronas had a moment going into Turn One, went wide, which allowed Pilgrim to take over the second position. For the remainder of the 50-minute race, the No. 3 and No. 8 Cadillac CTS-V cars went on to take the checkered flag. O’Connell logs his fourth win of the season.

“The Volvo got a great start, as we expected,” O’Connell said. “He was able to hold a nine or ten car lead to me. I was pushing. I couldn’t close on him. In Turn 11 he got caught up in traffic and I was able to get by. The lap I went by, Figge spun, I think in the water that was on the track in Turn Six. That was pretty much the race. The Cadillac was good all 50-minutes. The handling was pretty good in this heat. I had to manage the tires, but everything worked out.”

Pilgrim also had some luck with front running competitors.

“I had a good start,” Pilgrim said. “Sofronas was able to get by me and I fell in line. It was really tight for the first few laps. We were headed into Turn One and Sofronas locked the rears and went straight on and had a long lazy spin, giving me the position. Johnny and I were running second and fourth, with a good four way battle upfront. They made us look better than we were with what happened to the Volvo and the Audi. We will take it. It was a good win for Johnny. I am happy with second. We also had a good manufacturer point weekend.”