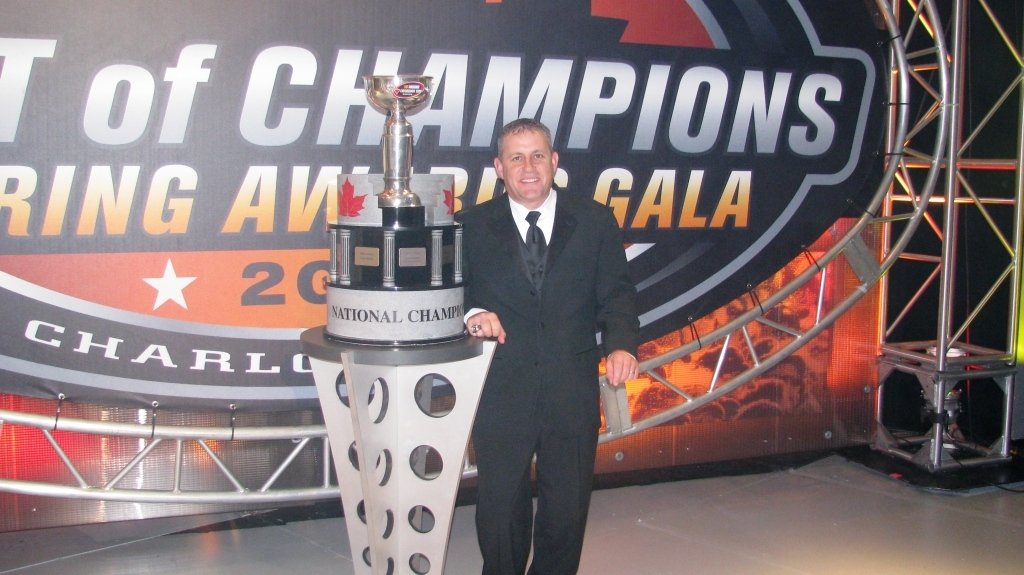 CHARLOTTE, NC (December 13, 2011) – On Saturday evening at the NASCAR Hall of Fame in Charlotte, North Carolina, Canadian Tire Series champion Scott Steckly was honoured as Canada’s national stock car champion during NASCAR’s Night of Champions Touring Awards Gala. It was the second time in the last four years that the Canadian Tire-sponsored racer has earned that distinction.

Steckly, from Milverton, Ontario, was joined at the awards celebration by fellow title winners from the ranks of the NASCAR Mexico, K&N Pro Series (East and West) and the Whelen Modified and Whelen Southern Modified divisions. In recognition of his 2011 Canadian Tire Series title, Steckly was presented with his championship ring by NASCAR president Mike Helton, during a program hosted by media legends Mike Joy and Dr. Dick Berggren.

Saturday’s gala banquet was the main event in a memorable week filled with public appearances by Steckly.

After delivering his championship-winning No. 22 Canadian Tire / MotoMaster Dodge to the NASCAR Hall of Fame for display last Tuesday morning, Steckly and his racing counterparts were whisked away for a photo shoot in downtown Charlotte. Wednesday was Media Day where Scott joined legendary NASCAR crew member turned radio host ‘Chocolate’ Myers in the Sirius Radio studios. He followed up that experience by participating in the annual ‘Karting Race of Champions.’

Describing the kart event, Steckly laughed, “They took all the [NASCAR Touring] Series winners and put them in racing go-karts. Max Gresham, from the K&N Series, eventually won the race. I might have had something for him, but I was black-flagged for rough driving.”

Celebratory dinners – on Thursday and Friday with the various series’ sponsors and track owners – set the stage for the highly-anticipated Champion’s Gala in Saturday evening.

“NASCAR always does things first class, all the way,” observed Steckly. “It was very special to have my wife Penny, my parents, my crew and a couple of my sponsors in Charlotte to help share in this accomplishment. It was a pretty busy week, but it was a lot of fun.”

In addition to his championship ring, jacket and custom-painted helmet, Steckly also returned home with the Keystone Light Award (Most Pole Positions) and the Dodge Mopar Award as the highest finishing Dodge driver in the final point standings.

“Everyone at the NASCAR head office talks very highly about the Canadian Tire Series and how much it has grown,” concluded Steckly. “While we’re down south, we plan to snoop around a little and see what secrets we can bring back that will let us go for a third title in 2012.”

In other Canadian Tire Series news from Charlotte, Louis-Philippe Dumoulin received the Rookie of the Year award, while Jason White was presented with the fan-voted Most Popular Driver award.

In addition to preparing his own mount, Steckly also fielded the #9 PartSource/ Rheem Dodge for past Canadian National Champion, Mark Dilley.

The series competes from coast to coast in Canada, with events extending from Motoplex Speedway in Vernon (BC) to Riverside Speedway in Antigonish in Nova Scotia.

In 2011, the NASCAR Canadian Tire Series ran 12 races with the schedule split between seven oval track and five road course venues, and appeared at such high profile events as the Honda Indy Toronto and the NASCAR Nationwide NAPA 200 in Montreal.

Prepared by JWN / Inside Track Communications