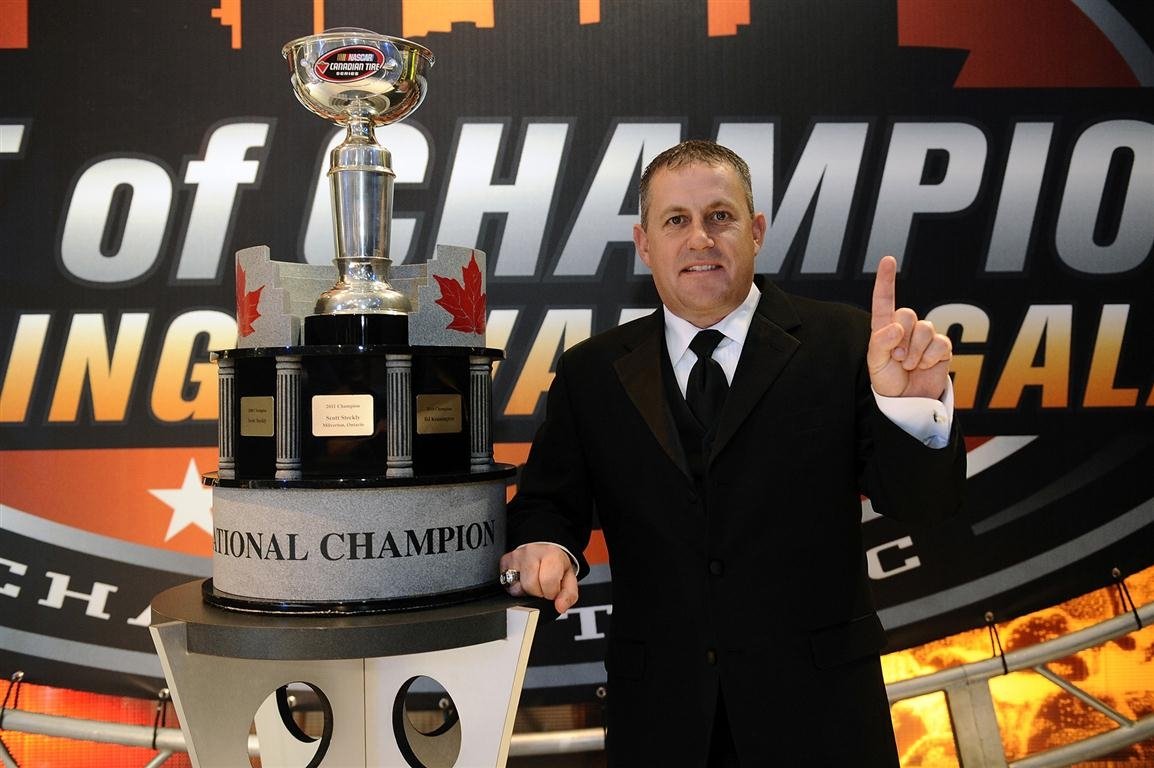 CHARLOTTE, NC (Dec. 13, 2011) – On Saturday evening, NASCAR hosted its 2011 NASCAR Night of Champions Touring Awards Gala in Charlotte, North Carolina. Canadian Scott Steckly – driver of the No. 22 Dodge Challenger SRT – was honoured at the event, which wrapped up an extremely successful 2011 racing season for the Dodge contingent competing on Canada’s NASCAR circuit.

Steckly was the leader of the Dodge brigade during the 12-race series, winning three races and three poles during the season. The Milverton, Ontario resident took the checkered flag in the May 28 season opener at Mosport Speedway and never looked back. He led the points all season long, collecting a total of nine top-five finishes en route to his second career NASCAR Canadian Tire Series title.

But Steckly was only one component in Dodge’s dominant NASCAR campaign in 2011. Dodge drivers won all 12 races during the recently completed season, which featured five road course and seven oval events.

“This was a banner year for our Dodge drivers whose performance dominated victory lane in 2011 and continued the winning-tradition of Dodge Motorsports and vehicles,” said Reid Bigland, president and CEO, Chrysler Canada. “Racing is in our blood and we’re proud to support the passion of NASCAR in Canada, congratulations to Scott and the rest of the team on another fantastic season!”

In fact, when added to Dodge victories in the final four races of the 2010 schedule – starting with Andrew Ranger’s August 29, 2010 win at Montreal’s Circuit Gilles Villeneuve – the manufacturer’s winning streak stands at 16 heading into the 2012 season.

“I would like to congratulate Dodge on an outstanding race season in the NASCAR Canadian Tire Series,” said Randy Paul, managing director, NASCAR Canada. “Winning every race of the 2011 season is an outstanding accomplishment. The Dodge-Mopar Fast Five Award is a tremendous program that rewards the team for their efforts throughout the season. NASCAR Canada is proud of its partnership with Dodge in the Canadian market.”

Dodge’s dominance was also reflected in the final standings. Including Steckly, Dodge drivers earned eight of the top-10 positions in the year-end points. DJ Kennington, who was the series’ champion in 2010, was runner-up in the 2011 points, while Don Thomson Jr., Mark Dilley, Ron Beauchamp Jr., Jason White, Jason Hathaway and Dexter Stacey were fifth through 10th, respectively.

Dodge and Mopar supported their drivers and teams as proud presenters of the Dodge-Mopar Fast Five Award again in 2011. Cash prizes were presented to the top-five eligible Dodge-Mopar teams after each race. The top-finishing Dodge driver won an additional $2,000, while the second highest-finishing Dodge-Mopar racer received $1,500 bonuses. The third ($1,000), fourth ($750) and fifth ($500) finishing eligible racers also received cash awards based on their results in each race. Scott Steckly is the overall winner of the Dodge-Mopar Fast Five Award for 2011.

Scott Steckly was the Fast Qualifier at Motoplex, Barrie and Riverside, and also started on the pole at Mosport International Raceway – based on his standing in the points – after qualifying was rained out.

Andrew Ranger, with sponsorship from the Dodge Dealers of Quebec, posted record-setting pole-winning runs on consecutive weekends at the Grand Prix de Trois-Rivières and at Circuit Gilles Villeneuve.

Canadian Alex Tagliani, a full-time competitor on the IndyCar circuit, started on the pole in a Dodge at Circuit ICAR, just days after starting on pole in the Indy 500. Pete Shepherd III (Delaware), Jason Bowles (Toronto Indy) and DJ Kennington (Auto Clearing Motor Speedway) were the other Dodge competitors who started on the inside of the front row in 2011.

Finally, Steckly’s Dodge also topped the ‘Most Laps Led’ chart in 2011. The two-time champion led the way for a total of 641 laps during the series’ 12 events. Fellow Dodge pilot Kennington was second in that category with 486.

ABOUT DODGE: The Dodge brand is a full line of cars, crossovers and minivans that are sporty, functional and innovative. They provide customers with excellent quality, innovation, and value.

Dodge now offers six vehicles that deliver nine litres per 100 kilometres on the highway, while retaining that distinctive Dodge innovation and style. With the all-new Dodge Durango and Dodge Charger, the No. 1 selling minivan in Canada for more than 27 years, the Dodge Grand Caravan, the No. 1 selling crossover in Canada, the Dodge Journey, as well as the Avenger and Challenger, Dodge has one of the newest product lineups in the country.

For more information, contact Jordan Wasylyk of Chrysler Canada at (519) 658-1142 or email jordan.wasylyk@chrysler.com. Follow Dodge and Chrysler Canada news and video on:

Prepared by Inside Track Communications // Photo of Scott Steckly at the NASCAR Touring Series Gala: Credit Getty Images for NASCAR

WeatherTech Racing On Pole For Rolex 24