#NASCAR • #MyChaseNation • @JeffGordonWeb – Over the next 10 weeks – roughly 70 days – NASCAR Sprint Cup Series drivers will log a scheduled 3,995.98 miles.But on Wednesday – in terms of distance traveled – 16 drivers collectively obliterated that figure during an unprecedented 16-market media tour known as “Chase Across North America.”

The most populated city in the United States? Jimmie Johnson went there (New York).

Biggest in Mexico? Got it: Carl Edwards, Mexico City. 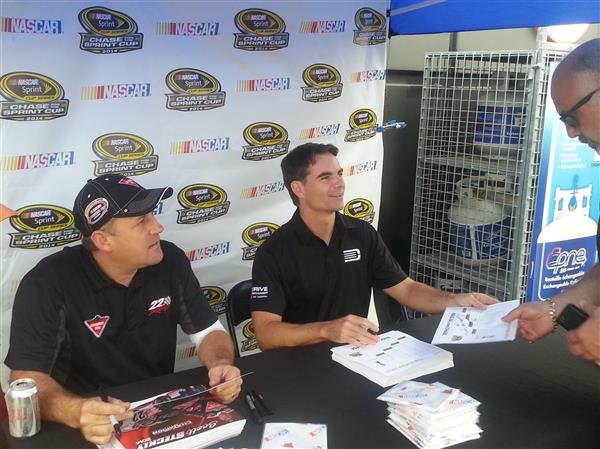 All 16 Challengers – the apt name of those who will vie for the NASCAR Sprint Cup Series championship – scattered throughout the continent today as part of an expanded media blitz to launch the Chase.

Live! With Kelly and Michael … and Jimmie: Once these 10 weeks are complete, we could have three drivers who have won a record seven NASCAR Sprint Cup Series championship: Richard Petty, Dale Earnhardt and Jimmie Johnson. But before Johnson, the reigning six-time series champion, embarks on that historic quest, he hit New York City for a day of media that included two of the most recognizable morning shows in television history. Johnson chatted with Matt Lauer and took a selfie with Al Roker during his visit on the TODAY show’s plaza and appeared on Live! With Kelly and Michael.

Kevin Harvick’s Chances For A Championship Better Than His Fantasy Football Team’s: Kevin Harvick visited ESPN’s campus in Bristol, Connecticut, appearing on several editions of SportsCenter, one of which included a fantasy football segment with ESPN fantasy guru Matthew Berry. After his appearance, one fan tweeted Harvick, “Saw you on SportsCenter. Your team [stinks].”

Dale Jr. In La La Land: The fans have spoken, 11 times over: Dale Earnhardt Jr. is NASCAR’s Most Popular Driver. And as its biggest star, it makes perfect sense that he would visit Los Angeles, a city filled with them. During his stay, Earnhardt appeared on several FOX Sports 1 shows and ended his day on Jimmy Kimmel Live!

Gordon Goes North of the Border: For the first time, a Chase-launching event took place in Canada, as four-time series champion flew to Toronto for a day of media and photo opportunities at such iconic Toronto locations as the CN Tower, Dundas Square and the Hockey Hall of Fame (a stop that included a photo with the Stanley Cup). 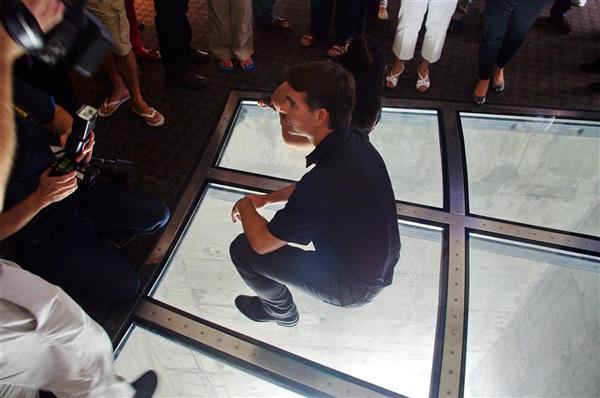 While in Toronto, Jeff Gordon stood on the CN Tower’s glass-floored observation deck, 1,122 feet above the ground (Credit Greg MacPherson / Inside Track)

Edwards Goes South of the Border: Carl Edwards speaks a bit of Spanish, and was able to wield that skill during his trip to Mexico City this morning. Edwards appeared at some of the city’s most internationally recognizable locations, including the Soumaya Museum and the Angel of Independence monument. Said Edwards: “We meet a lot of Mexican, Mexican-American and Latino fans at the track each week. I think it’s important for us to do things like this and find ways to engage them. … I really like Mexico. When I heard what NASCAR was doing with the Chase Across North America, I chose to come here because I love it.”

Kurt Busch Salutes Military in San Antonio: Kurt Busch’s passion for American service men and women has been well document, so his visit to the Center for the Intrepid at Brooke Army Medical Center in San Antonio was a natural fit. “”That’s what it’s all about. Just saying thanks to our men and women who have served. … To see people smiling and to get some inspiration and to say we appreciate your service.”

Matt Kenseth Has Pep In His Step: Texas is a big state. It gets two drivers. Matt Kenseth hit Texas Motor Speedway in Ft. Worth, Texas, for a pep rally with six schools with more than 3,000 students in attendance. Kenseth’s sponsor, Dollar General, through its Dollar General Literacy Foundation, donated $1,000 and a case of books to each school.

Busch’s Promise: ‘Winner, Winner Pizza Dinner’: Kyle Busch made a special appearance at Chicago’s G.B. Swift Specialty School as part of The NASCAR Foundation’s education initiative, where students filled out Chase Grids. Busch promised a Pizza Party to the winning class (media can fill out their Chase Grids at www.NASCAR.com/grid … but are not eligible for the pizza). “The kids were awesome today, and I think we picked up more than a few new fans for Sunday, even before we offered pizza,” said Busch. “Not only that, but I think it’s important for them to hear about the value of education from someone they might not expect it from. NASCAR incorporates as much math and science as any professional sport out there, and dedicating yourself in the classroom will benefit you in any profession, especially as a race car driver.”

Grid-ology With Kasey Kahne: In Boston – a little more than an hour south of New Hampshire Motor Speedway – Kasey Kahne joined college basketball broadcasting legend Dick Vitale and NCAA bracket expert Joe Lunardi at the Hard Rock Café to give their expert opinions on filling out the perfect Chase Grid. Said Vitale: “The beauty of college basketball is the excitement of March Madness and the tournament, and that’s what NASCAR has now. It’s gonna be awesome baby!” For the record, Lunardi picked Jimmie Johnson to win the championship. Kahne went with a bit of a dark horse: Kasey Kahne.

Biffle Spreads Joy At Children’s Hospital: Greg Biffle visited with patients at the Nemours/Alfred I duPont Hospital for Children in Wilmington, Delaware, today, a hospital in the Delaware Valley that cares for more than 250,000 children annually. The kids asked Biffle a bevy of racing-related questions, as well as this gem: “If you could have a superpower what would it be?” Biffle said: “To be able to fly.”

Tough ‘Cookie’ Allmendinger Relishing Dark Horse Role: AJ Allmendinger, who enters his first Chase, participated in a local media tour in Kansas City, Mo., and made an appearance at a Hy-Vee retail store location, where he decorated cookies with children in the store’s bakery. Throughout the day, the comedic Allmendinger – a dark horse candidate in this year’s championship hunt – continually dropped the famous line from the movie Dumb and Dumber, “So you’re saying there’s a chance.”

Capital Reigns: Top Seed Keselowski Hits Raleigh: Brad Keselowski, whose win at Richmond International Raceway last Saturday locked him in as the top seed to start the Chase, visited North Carolina’s capital city of Raleigh on Wednesday, participating in a media tour and outdoor fan event at the popular City Plaza on Fayetteville Street. The 2012 champion said, “We’re kicking off the launch of NASCAR’s ‘Chase Across North America.’ Sixteen drivers going to 16 different cities, and as the number one seed, I got home field, which is here in Raleigh, close to Charlotte, North Carolina.”

Kid at Heart Logano Cheers Up Children: Joey Logano paid a visit to the Children’s Hospital of Alabama at the University of Alabama Birmingham to spend time with the patients for the hospital’s ‘Celebrating Superheroes’ month. During his stay, Logano asked the kids who their favorite driver was, which led to this exchange: Child: “Lightning McQueen [from the movie Cars].” Logano: “It’s hard to beat Lightning.”

Newman To School: ‘Cheers To You’: Ryan Newman participated in a pep rally at Martinsville High School, along with the 150-member marching band, cheerleaders, football players and students. The clear highlight: Newman taking cheer lessons from two of the school’s cheerleaders. “The most fun part for me about today was having some kind of impact on the kids. They are highly influential and they are getting ready to make a difference in our lives and so it is nice to have influence on those people. High school is an important time in anyone’s life.”

Hamlin Has Most Important Meal of the Day: Denny Hamlin participated in a “Breakfast with Champions” along with Phoenix International Raceway President Bryan Sperber and former Indianapolis 500 champion Tom Sneva. The breakfast concluded with Hamlin filling out his own Chase Grid. Not surprisingly, in the empty white box where you’d write the champion, Hamlin simply wrote, “#11.” Said Hamlin, “In this format, you won’t know who the final four will be until the last lap at Phoenix. You live in the here and now in racing. I really think this will be the most exciting format. As far as the Chase is concerned, NASCAR nailed the system and I think it will stay for a long time.”

Almirola’s All Fired Up: Aric Almirola visited Homestead Reserve Air Force Base near Homestead-Miami Speedway, where he participated in a variety of activities with stationed service members, including a ‘burn pit’ exercise and an F-16 jet launch. During the burn pit exercise, Almirola donned firefighter’s gear, and helped extinguish a burning airplane. Said Almirola, “Man, if I knew how close to fire I would be, would’ve brought my fire suit.”