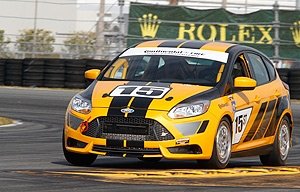 MARKHAM, ONTARIO (January 17th, 2012) – After almost two decades of competition success in the Grand Sport (GS) class of the Continental Challenge, and its predecessor series, Multimatic Motorsports is returning to its roots with a two car entry in the highly competitive and exciting Street Tuner (ST) class.  This new direction has been born from Ford Racing (FR) adding the new Focus to its competition programs with Multimatic Motorsports. The highly successful Mustang FR500C and Boss302R customer race programs will remain a priority for both Ford Racing and Multimatic with comprehensive at-track support serving the needs of privateer race teams who campaign in GS.  Ford’s factory race effort will be directed at its new global racing platform, the Focus ST-R powered by EcoBoost.  This catalogue racer is built on the recently launched third generation Focus, which is a truly global vehicle powered by Ford’s 2.0L EcoBoost, identical versions being built at manufacturing facilities around the world. Once again, FR chose Canada’s Multimatic Motorsports to develop the new ST-R, the first version of which being specifically configured for Grand-Am Continental ST competition although the base platform, which includes an FIA certified safety cage, can be tailored for a wide range of regional competition, based on local rules.

Multimatic Motorsports will lead Ford’s new factory program with a two car Focus ST-R effort in the Continental Tire Sports Car Challenge (CTSCC) with the team’s regular young gun drivers Gunnar Jeannette and James Gue undertaking both the development and competition driving duties.  The cars entered in the CTSCC will originate at Ford’s Wayne, Michigan assembly plant making them a rarity in an ST class dominated by European and Asian offerings…  Multimatic’s  “focus” will be to win the series and defend the honor of the North American auto industry.  The 2012 Continental series will be contested over ten races at some of North America’s finest motorsports venues, including the Indianapolis Motor Speedway.

Multimatic has been developing the Focus ST-R since early summer with significant up front analytical engineering work being followed by an extensive track testing program.  Hundreds of laps have been run in the interest of optimizing the suspension and powertrain tuning as well as thoroughly proving durability.  The 2012 CTSCC factory race effort is an extension of this comprehensive development program, assuring that customers receive competitive and reliable race cars.  For more information on this exciting new Ford Racing ready-to-race vehicle and ordering ST-R, check out racing.ford.com.

The first of Multimatic’s two factory race cars was successfully run amongst its 2012 competition during the official Daytona Grand-Am test days at the beginning of January, with a follow-up durability program subsequently being completed at Homestead-Miami Speedway.  The Focus ST-R’s powered by EcoBoost competition debut will be at the opening round of the CTSCC on January 27th at Daytona International Speedway.

Multimatic Motorsports Takes Aerodynamic Development To The Next Level