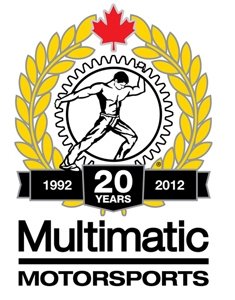 MARKHAM, ON – Multimatic Motorsports enters its twentieth year of competition in 2012 with the largest racing program in the organization’s history; campaigning new cars in both classes of the highly competitive Grand-Am Continental Tire Sports Car Challenge.  After winning three Grand Sport (GS) titles in ten years the team will now add a two car Street Tuner (ST) entry as well as continuing its GS legacy with a pair of Aston-Martin V8 Vantages.

After enjoying considerable competition success in recent years with the venerable Mustang pony car, Ford Racing Technology (FRT) has shifted its focus to the Focus.  The Boss 302R customer racing programs will continue to be fully supported but Ford’s factory racing effort will now be directed at the increasingly competitive and exciting ST class.  Once again, FRT has chosen Canada’s Multimatic Motorsports to develop and campaign their weapon of choice, the Ford Focus ST-R.  Multimatic and Ford have developed the ST-R using the same approach as the highly successful Mustang FR500C and Boss 302R racers and the commercial model will be identical, with cars being offered to customers in parallel to an initial factory competition program.

With Ford’s emphases shifting to Focus in ST, Multimatic Motorsports is continuing its GS tradition by becoming the Aston Martin Racing (AMR) partner team in Grand-Am.  AMR has developed a Grand Sport version of its highly successful GT4 Aston Martin Vantage which Multimatic Motorsports will campaign in the 2012 Continental Tire GS championship.  This car will be offered for sale to customers and is available directly from Multimatic.

With four cars in two classes, 2012 will eclipse Multimatic Motorsports busiest years and is a fitting bookend to two decades of competition that has resulted in five major championships, class wins at the 12 Hours of Sebring and 24 Hours of Daytona and what remains Canada’s only class win at the 24 Hours of Le Mans.  It all started in 1992 with a Firestone Firehawk Championship using the now famous Alcoa sponsored, “aluminum” Ford Taurus SHO.  It is only fitting that the team is now back building and campaigning front wheel drive Ford’s for 2012.  Scott Maxwell leads the driver line-up in the team’s #55 Aston Martin just as he did back in 1992, and for every single one of the team’s major successes.  Team Principal Larry Holt will continue to attend all of the races as he has for the past twenty years and Team Manager Sean Mason will again be coordinating the entire program having missed only the first two seasons after joining in 1994.

Both the Aston Martin GS Vantage and Ford Focus ST-R will be in attendance at the official Grand-Am January Test Days at Daytona International Speedway, January 6-8.

Multimatic Motorsports Takes Aerodynamic Development To The Next Level

Wetter and wiser, Rana and Ferrari Enzo have unfinished business at Targa