(15 November) – Braselton, GA: The Mazda RT24-P crossed the finish line at Road Atlanta a mere 3.3 seconds ahead of the second place #31 Cadillac after ten hours of hard racing, sealing an incredible win for Mazda Motorsports.

The victory was all the sweeter after the #55 Mazda had gone three laps down just over three hours into the race due to a spark plug failure. The comeback drive from Harry Tincknell, Oliver Jarvis and Jonathan Bomarito, combined with bold strategy calls from the Multimatic engineering box, and impeccable pit work by the team resulted in the cars most spectacular result of the entire campaign.

The results of Qualifying showed that the competition was going to be as tight as ever for the season-closing endurance classic. Harry Tincknell grabbed a front row starting spot for the #55 Mazda by posting the second fastest time, a fractional 0.015 seconds shy of pole position.

A furiously fast game of cat and mouse started as soon as the race began. Tincknell held second at the start, setting off at a blistering pace after Felipe Nasr in the #31 Cadillac. However, the team called him in after just 28 minutes for the car’s first pit stop as the qualifying tyres had reached their limit, a lap before a fortuitous full course yellow (FCY) was thrown. He returned to the box again just a few laps later when the pits opened for DPi cars, quickly brimmed the fuel and returned to the track in the lead as the other competitors had to wait on full fuel loads.

He held onto the lead until the next FCY, just after the first hour of racing. Now it was Jonathan Bomarito’s turn to take the wheel with full fuel and new tyres. He rejoined the race in fifth place as this time the other DPi cars eschewed both driver changes and fresh rubber. After yet another, albeit brief FCY, Bomarito resumed his charge and by the end of his run the #55 Mazda was back in the lead of the race, although on a slightly different strategy to the rest of the DPi protagonists.

At the three-hour mark, Bomarito pitted for tyres and fuel and handed over to Oliver Jarvis who immediately reported a debilitating misfire, which took five excruciating slow laps to diagnose. The root cause was a broken spark plug electrode which then required another three laps in the pits to rectify. By the time he returned to the track the #55 Mazda was almost four laps down but now back on full song. The team had a mountain to climb.

The next FCY came just under half an hour later, and by staying out while all the other DPi competitors pitted, followed by a stop just before the track went green, the Multimatic team was able to recover one of the lost laps plus catch up the partial lap deficit. Just two more to find!

At the restart there was an incident that took out seven GT cars so the whole field went back under caution, this time for over 30 minutes. Multimatic used the opportunity to pit again, on two occasions with no position penalty, to investigate a potential suspension issue that Jarvis had reported. No obvious problem was identified beyond the front splitter being completely jammed with debris which was removed during the stops. 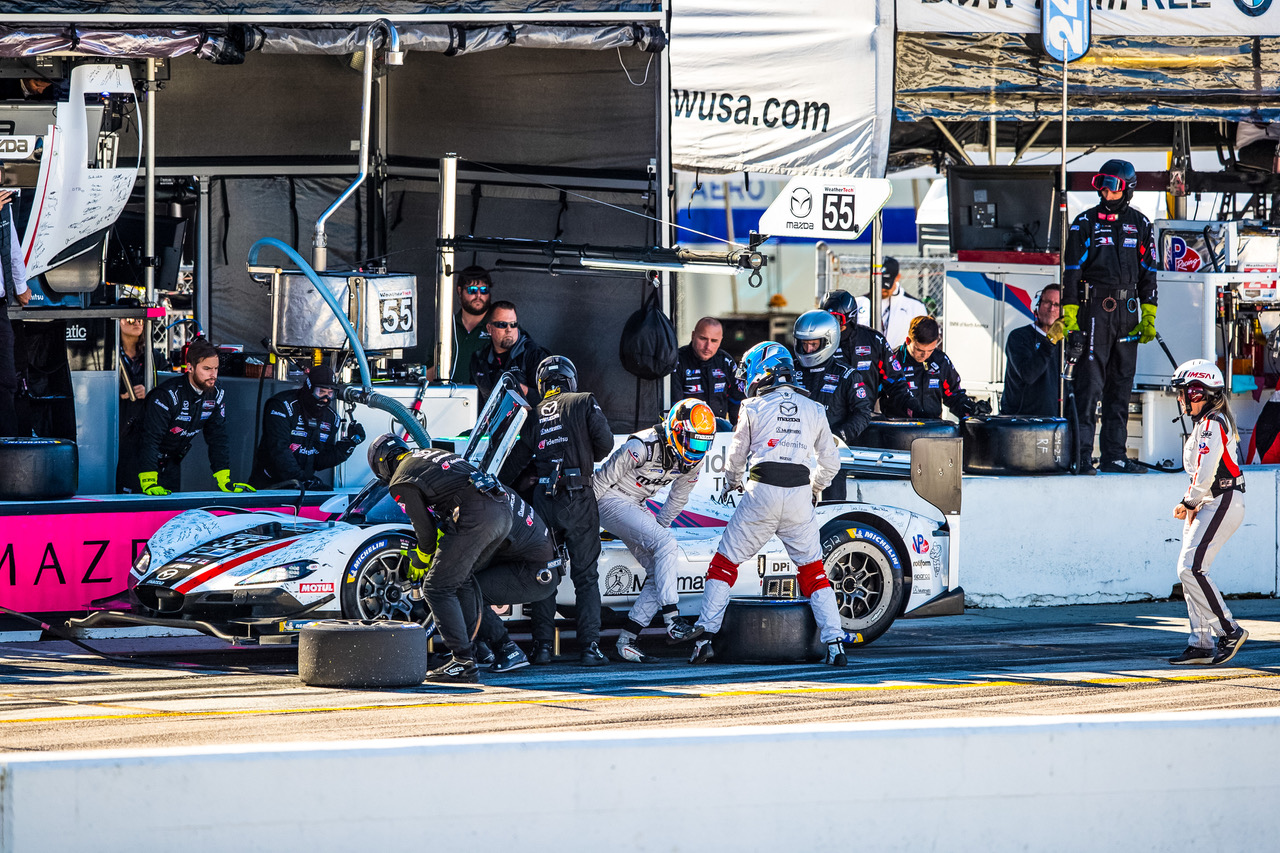 When the race reached half-time, the track was green again. But not for long! As the lap counter reached 199 an incident occurred that the Multimatic engineers believed would cause a FCY and they instructed Jarvis to dive the pits, the only DPi to do so. As he handed over to Tincknell, with new tyres and fuel, the track did indeed go yellow and the Mazda was able to sneak out in front of the DPi leader, gaining back another lap. Then as the pits opened for the prototype cars they all streamed in while the Mazda stayed out and gained a second lap back during the single caution period of fifteen minutes. Good strategy and some incredible luck had returned the Mazda to the lead lap and fully back in the hunt with just under four and a half hours to go.

Tincknell blasted past Jimmie Johnson in the #48 to take sixth place and soon after made a great move on Alexander Rossi in the #10 for fifth. He then grabbed fourth from Loic Duval in the #5 just a handful of laps later. Harry was on a charge!

Tincknell pitted with three hours of the race remaining to hand over to Bomarito, a calculated short fill allowed the American to jump to third where he stayed for his entire stint, battling in the heart of the DPi action. Jarvis was up next and as the combat intensified and the battle of the short fuel fills reached a peak, the #55 was pushed down a couple of spots, although Oliver battled back to third with the top three cars covered by just one second for most of his second stint. 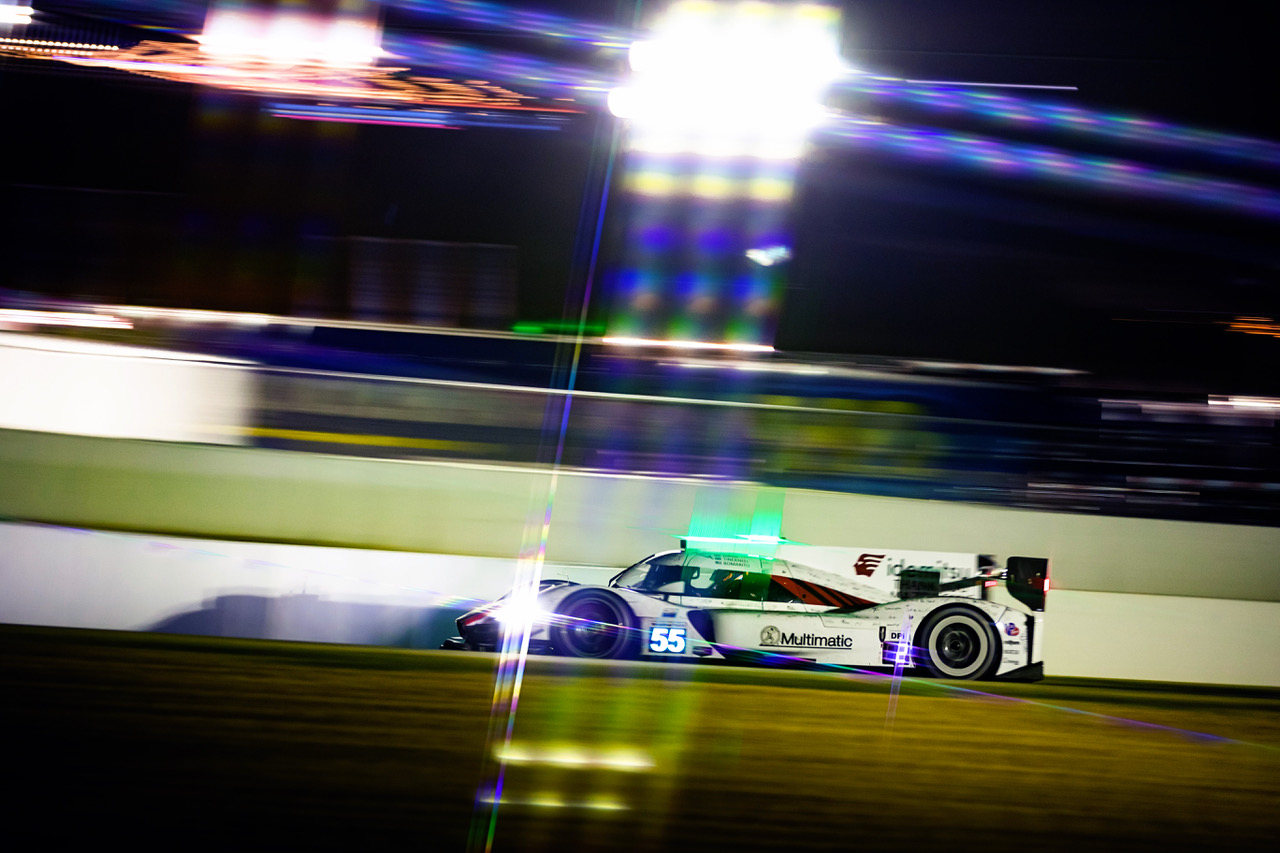 With an hour and fifteen minutes left, the Multimatic engineers rolled the dice again and stopped Jarvis early to get Tincknell in so that he could get acclimatised to the darkness and track conditions and get more than a single final stint to have a go at the leaders. Once the penultimate DPi pit stops had cycled through, the #55 was in second place, hunting down Felipe Nasr in the #31 who unfortunately would require less fuel on the last stop due to the strategy that Multimatic had chosen. The team called Tincknell in for the final stop with a little over 30 minutes to go, following the #31 down the pit lane, Nasr leaving a full six seconds ahead of the frustrated Englishman. The #10 of Ricky Taylor also passed the Mazda with a classic undercut helped by the same fuel advantage that the #31 had enjoyed but Tincknell managed to pass him on Taylor’s out lap and started to relentlessly hunt down Nasr. It didn’t take long for the Mazda to reel in the Cadillac and Tincknell pounced in traffic, making a move in turn 7 that, although aggressive, was well considered as he knew that the championship leader wasn’t going to take the risk of fighting back and that single move sealed the final victory for the Mazda RT24-P.

“I’m pretty lost for words,” said Tincknell straight after the race. “Multimatic, Mazda, AER, everyone who has been involved in this programme, we said at the start of the weekend that we wanted to go out on a high. From the win at Sebring, to Watkins Glen and now Petit Le Mans, I’m so proud of everyone involved in the programme. It’s a real family and wherever this team goes next it’s going to be very special. Thank you to everyone who has supported us. When it was announced the programme was finishing, the outpouring of support from all the Mazda fans really showed us how much support we had so we were desperate to do the best we could. There was no way I was going to let that one go at the end. We never gave up and I was so happy to bring it home.”

Multimatic Motorsports boss, Larry Holt said: “It’s not often that I’m lost for words but I don’t really know what to say. I’m feeling quite emotional as it’s the last time we’ll campaign the Mazda and it just won a legendary endurance race, it’s hard to take in. We wear the Mazda “Never Stop Challenging” reference on our T-shirts and it has never been realised stronger than here in Atlanta. It looked pretty bleak when we were almost four laps down just three hours in but not one member of the team thought that it wasn’t still possible to challenge for a win, and so it was. The pit stops were outstanding, the engineering and strategy calls were impeccable and our drivers got their heads down and dealt with the traffic and endless restarts with calm and calculated aggression. Our pace never faltered and Harry’s last stint will go down in the Multimatic Motorsports history books as a top five drive. I would also suggest that this win just went to the top of our all-time biggest accomplishments list. Thanks Charlie, Leena, Stephen and every single member of the organisation, you guys made that magic happen. And finally, thank you to our partners, Mazda, for the trust and support you have given us over the past years, it’s why we have always been so motivated to win with the RT24-P.”