Lewis Hamilton made an incredible charge, eventually getting past Max Verstappen to win in Brazil, on Sunday. CREDIT F1.

In this edition of Dave Mathers’ Monday Motormouth blog for InsideTrackNews.com, he covers the dramatic F1 race in Brazil, NHRA and IMSA crowning its champs, and more. This is the November 15, 2021 edition.

FORMULA ONE: The third sprint qualifying race of this year was held Saturday at Interlagos, Sao Paulo, Brazil. And there was controversy, LOTS of controversy. Lewis Hamilton, already facing a five-spot penalty for a power unit replacement, had his qualifying time disqualified for having too large an opening on his DRS system and had to start from the last spot.

Max Verstappen was given a 50,000 pound fine for, wait for it, putting his hand on Hamilton’s spoiler. The stewards actually had a video of the incident sent by a fan on the other side of the racing surface! Go figure.

Lewis passed four cars before the third corner of the first lap and then mowed down car after car catching Lando Norris on the last lap. His pass on Norris will be on all the highlight reels for sure. He finished fifth meaning he started 10th on Sunday. Valtteri Bottas won the race with Verstappen all over his rear end while Carlos Sainz ended up third in his Ferrari. The first three finishers were the only ones to collect points.

Wow, what a race yesterday!! Hamilton started 10th and was up to 3rd in just 8 laps. He finally got into second behind Verstappen and attempted an outside pass on lap 48 only to be pushed wide. The stewards investigated but determined it was ‘one of them there racing deals’!

Lewis persisted and finally got around Max cleanly on lap 59 and cruised home to the win ten seconds out front. Bottas finished third. Max leads Lewis by 14 points with Bottas a very distant third. Their next race is this weekend in Qatar. 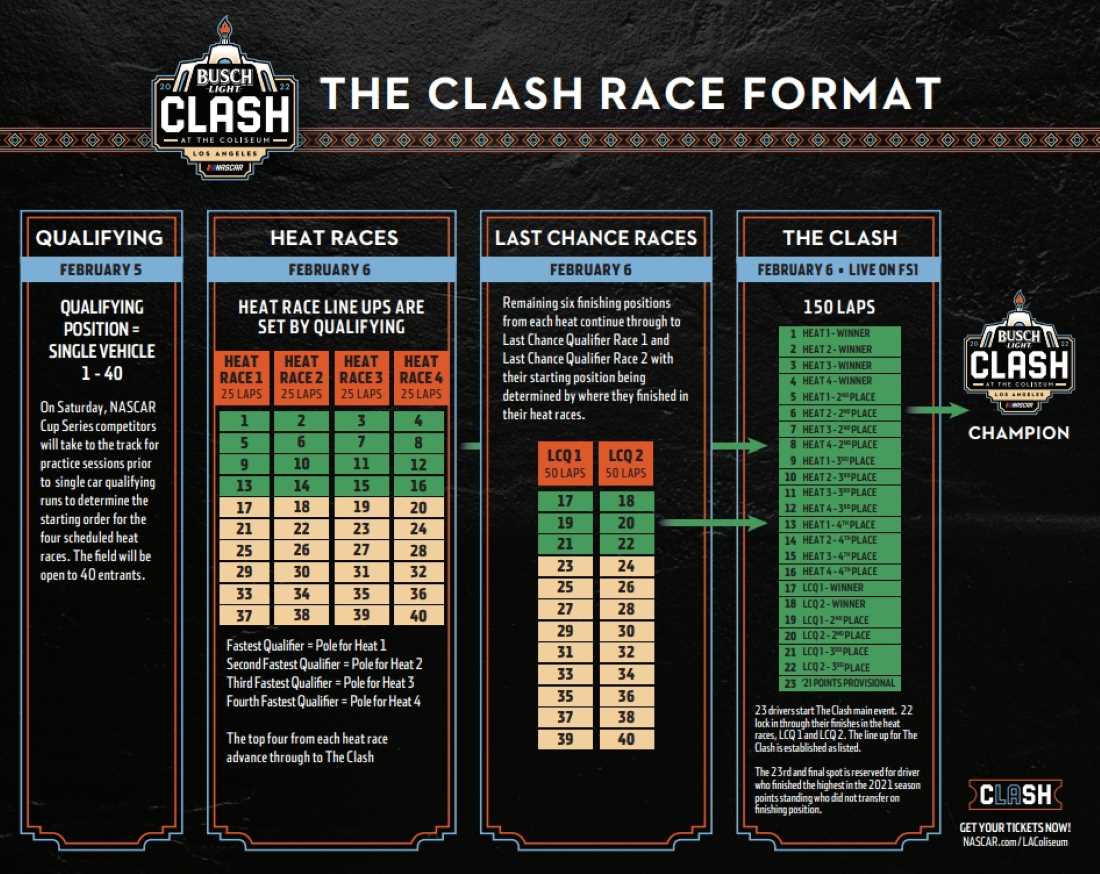 NASCAR CUP SERIES: The next race for the Cup series is at, wait for it, the Los Angeles Coliseum. It will be the ‘Busch Light Clash at the Coliseum,’ a non-points race on the tight little one quarter mile track.

The track could fit into the grassy area between the track and pit road at Daytona International Speedway!! The points racing will begin in earnest at Daytona on Sunday, February 20 at 2.30 P.M. I can hardly wait!!

NASCAR XFINITY SERIES: Their next race, the first for the 2022 season, will be at Daytona International Speedway on Saturday, February 19, 2022 at 5 P.M.

NASCAR CAMPING WORLD TRUCKS: The next race for the series is at Daytona International Speedway on Friday, February 18, 2022 at 7.30 P.M., the first race on next year’s schedule.

NHRA: Steve Torrence continued his total domination of Top Fuel at Auto Club Raceway at Pomona yesterday taking out Antron Brown in the final and adding to his insurmountable lead and clinching the championship with 236 point cushion over Brittany Force.

Bob Tasca won Funny Car over Alexis DeJoria while Ron Capps, who lost in Round 2, hung on to win the championship by 37 points over Matt Hagan.

Greg Anderson qualified number one again in Pro Stock and won over Kyle Koretsky in the final. He won by 107 over Erica Enders.

The Pro Stock Motorcycle class only had 12 entries. Matt Smith qualified second and bettered number one qualifier Karen Stoffer in the final. Matt won the championship by 131 points over Angelle Sampey’. They return to action on the weekend of February 20 for the Winternationals at Pomona.

I have to comment, once again, on the track prep and track conditions that were encountered at Pomona. Six of the fifteen Top Fuel pairings had ‘traction issues,’ eight of 15 Funny Cars had ‘problems’ and to show how bad things were six of 15 Pro Stock pairings, yes, Pro Stocks, had ‘loss of traction’!! The Drag Race Central guys were getting quite creative in describing those ‘issues’!!

What are the odds that there would be 57 Stockers and exactly 57 Super Stockers at the Auto Club Raceway at Pomona?

IMSA: The most memorable part of the Petit LeMans at Road Atlanta Saturday, at least for me, was the carnage caused by the major wreck with six hours to go.

The number 3 Corvette GTLM came over the top of the hill approaching 10 at full song only to be met by a blocked track. At least five cars were torn up.

This was the last race for the GTLM class as the program changes next year. In Mazda’s last ‘official’ IMSA Prototype race, Harry Tincknell, Oliver Jarvis and Jonathan Bomarito pulled off the win in the Multimatic-run effort.

But the drama was right behind them as Felipe Nasr in the Whelen Engineering Cadillac and Ricky Taylor driving his father’s Konica Minolta Acura battled it out for the overall championship.

Ricky tried a banzai pass at the end of the long back stretch but overcooked it and slid across the grass coming out of 10 ahead of Nasr but now on dirty tires.

Nasr went back under him and retook second place and the points needed to cement the championship win.

The WeatherTech Porsches took first and second in GTLM class. The Pfaff Motorsports Porsche finished second in the GTD class behind the Heart of Racing Aston Martin.

– We see that former Ford CEO Mark Fields, now the interim CEO of Hertz and turning that company around, has agreed to buy 100,000 Tesla EVs. I’m sure this move will evoke the ghosts of the old Shelby GT350Hs that were raced by many. So will it be Rent on Saturday, Drag Race on Sunday and Return on Monday? I’m betting it will be unless Tesla reprograms the units to ‘limit’ speed and acceleration. Wait for it!

– AWESOME news from General Motors as their Oshawa factory came back to life with the first pickup coming off the line last Thursday. This created 1,600 jobs!! Well done.

– We lost racing legend Bob Bondurant last Friday at the age of 88. Bob had run his driving school for over fifty years and his graduates have won championships in several disciplines.