2011 Barrie Speedway ‘Gary Reynolds Memorial’ winner Mike ‘Lights Out’ Bentley has had a tumultuous start to the 2012 season to say the absolute least. The Acton, ON opened up his campaign at Sunset Speedway this past Saturday, and after posting impressive results through heat race qualifying, was caught up in a serious wreck during the evening’s feature race.

The footage (courtesy of Dan Craik at RobPooleRacing.com) can be viewed in its entirety here. Bentley’s wreck begins at the 3:40 mark. The incident occurred when Sunset newcomer Gary Elliott lost a transmission along the back straightaway. Unable to avoid the massive amounts of fluid coating the speedway, Bentley found himself embedded in the turn-3 wall with severe damage to the front and center sections of his Limited Late Model.

Immediately following the event, Bentley confirmed that the damage to the team’s only chassis would likely end their 2012 season prematurely. However, Inside Track has obtained an exclusive report from the family-run operation that Bentley has acquired a new chassis from London’s McColl Racing Enterprises, with ‘Lights Out’ slated to return to Sunset for this Saturday’s event.

Bentley, a long-time MRE client, will be behind the wheel of the same chassis campaigned by multi-time Sunset champion Stompin’ Tom Walters through the 2011 season. The car has been completely redone since Walters last raced the car in September of last year. The purchase of the new chassis has depleted much of the team’s racing budget for 2012, and significant marketing support will be needed for Bentley to run the entirety of Sunset’s 2012 schedule. Parties interested in sponsoring the unquestionably dedicated wheelman can contact Bentley via email at mike-bentley@hotmail.com or on twitter @MikeBentley51. 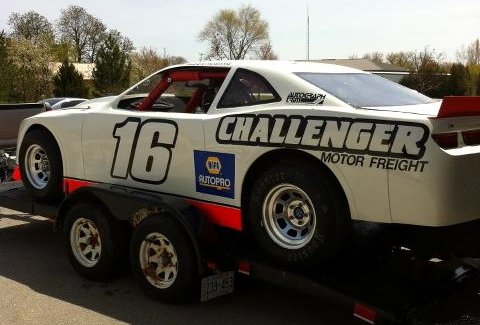 In Delaware Speedway news, Truck series veteran Kathleen Hosang (above) has announced she will move to the track’s wildly competitive Super Stock division for the 2012 season. The team’s fulltime campaign will once again be crew chiefed by Kathleen’s father Mike, with primary marketing support coming from Challenger Motor Freight, Autograph Trim and Napa Autopro. The team has purchased a chassis previously run by Super Stock veteran Darrell Lake and plan to debut the car at this Saturday’s open practice.